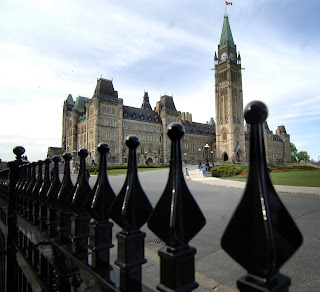 The Ottawa Citizen published an article by Jason Fekete, Federal public service pension board executives’ earnings rise by half to $16 million, report finds:


The five top-paid executives at the Public Sector Pension Investment Board, a federal Crown corporation, were awarded more than $16 million in total compensation for the 2013 fiscal year — a roughly 50 per cent increase over the previous year — as the organization posted record investment returns, reveals a new report.

The eye-popping payouts to executives at the federal organization — which invests funds for the federal public service, Canadian Forces and RCMP pension plans — come as the Conservative government lays off thousands of federal workers, reforms the public service pension plan and digs in its heels on contract negotiations with some federal unions.

Investment board officials note, however, the organization does not receive a budgeted annual appropriation from government like some Crown corporations, and is a self-sufficient entity that operates from the returns it earns from pension plan investments. The income earned by the investment board is allocated to federal pension funds to pay off the obligations owed to plan members.

The board’s 2013 annual report shows the total compensation awarded to the five highest-paid executives totalled about $16.3 million — almost 50 per cent more than the $10.9 million awarded in 2012.

“These awards fairly reflect our current pay-for-performance approach,” says the report, tabled this week in the House of Commons.

The pension investment board, following a compensation review, has subsequently approved changes that will, going forward, reduce the maximum potential payouts to senior executives.

He was also awarded almost $520,000 from “restricted fund units,” more than $35,000 in benefits and other compensation, and $72,200 from pension and supplemental employee retirement plans. In the previous 2012 fiscal year, he received $3.4 million in total compensation.

The incentive plans for executives, which are based on rolling four-year periods, paid “maximum or close to maximum payouts for many senior executives for fiscal year 2013,” the report says.

The hefty payouts were tied to the investment board’s strong performance over the past four years, which saw $3.7 billion of value added to the pension funds over and above benchmark returns, the report says. Over the four years since the financial crisis of 2008-2009, the investment board has achieved an annualized return of 12.2 per cent.

“It’s a pay-for-performance model. If you have good (performance), then the incentive plans have payouts, and if you don’t have the performance then they don’t pay out,” said board spokesman Mark Boutet.

“This year, it was our best performance against our benchmark in the whole history of the organization.”

Indeed, senior vice-presidents Daniel Garant (public markets investments) and Neil Cunningham (real estate investments) both earned more than $3 million in total compensation, including more than $300,000 each in base salary, and more than $1 million each in both short-term and long-term incentives.

Incentive compensation is the largest component of the total remuneration paid to the board’s executives, with short-term and long-term financial incentives based on rolling four-year periods. The board says the incentive compensation structure rewards outstanding performance while discouraging undue risk taking.

The pension investment board reports to Treasury Board President Tony Clement, but it’s an arm’s-length organization that establishes its own compensation levels, say federal officials. The government directed questions back to the Crown corporation.

The organization’s board of directors — which is appointed by the government on the minister’s recommendation — approved the compensation payouts, based on a policy that “aims to maintain total compensation at a fair and competitive level.”

The federal auditor general and outside auditor Deloitte conducted a special examination in 2011 of the pension investment board’s compensation framework and found its incentive programs are comparable to industry practices.

The Public Sector Pension Investment Board is one of Canada’s largest pension investment managers, with approximately $76.1 billion of assets as of March 31, 2013.

In my last comment, I covered PSP's fiscal year 2013 results, praising them for the strong performance they delivered over the last four years. I explicitly left out a discussion compensation at PSP because I saw no major issues and think the strong four-year performance justified the compensation they earned.

The article above serves no purpose but to anger federal government employees who have experienced  layoffs and major reforms in their public sector pension plan.

In particular, some Canadian public pension funds need to do a better job explaining the benchmarks used in determining their policy portfolio and why these benchmarks appropriately reflect the risks they're taking. They also need to be a lot more transparent about the leverage they're using in all investment activities and how this figures into their compensation.

Below, the CBC reports that the highest-paid banking executives in North America are Canadian. There is controversy surrounding compensation at Canada's big banks. All I know is that Canadian public pension fund executives are paid based on long-term performance and some of them would be better off in the private sector. Keep that in mind the next time you read an article questioning their compensation.