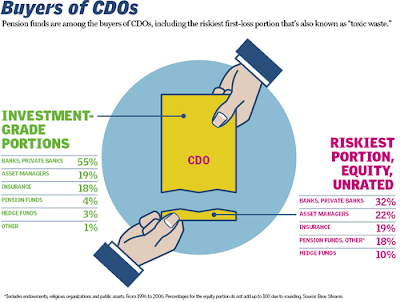 There is a time bomb about to explode and it has to do with pension funds that invested in risky and no-so-risky colateralized debt obligations (CDOs). Last July, Bloomberg markets wrote an excellent piece entitled, The Poison in Your Pension (click hyperlink to view). The article describes how banks were selling the riskiest CDO tranches, known as toxic waste, to public pension funds and state trust funds (click on image above to see who are the buyers of CDOs).

CDOs are packages of securities backed by bonds, mortgages and other loans. It turns out that some large public pension funds, including the California Public Employees' Retirement System (CalPERS), the largest U.S. public pension fund, invested in the equity tranches of CDOs to boost their returns. And CalPERS was not the only public pension fund to invest in these risky assets.

Once the subprime crisis hit, the values of these securities plummeted. I quote from the article:

"Because CDO contents are secretive, fund managers can't easily track the value of the components that go into these bundles. ``You need to monitor the collateral in your investment and make sure you're comfortable there will be no defaults,'' says Satyajit Das, a former Citigroup banker who has written 10 books on debt analysis. Most investors can't do that because it's extremely difficult to track the contents of any CDO or its current value, he says. About half of all CDOs sold in the U.S. in 2006 were loaded with subprime mortgage debt, according to Moody's and Morgan Stanley. Since CDO managers can change the contents of a CDO after it's sold, investors may not know how much subprime risk they face, Das says."

The highest-rated slices of CDOs are sometimes called super-senior tranches because investors get their payments before owners of the riskier equity tranches. But as it turns out, the value of even the highest-rated CDO tranches are being marked down. In April, a ratings downgrade by Moody's Investors Service slammed a CDO issued by an affiliate of Fidelity Investments.

Why is this important for pension plans? Because many pension plans are exposed to senior CDO tranches with AAA ratings and if the downgrades continue - which seems highly likely - the ripple effects will be felt all over global financial markets. By law, most public pension funds in the U.S. and elsewhere are not allowed to carry anything but AAA tranches on their books.

Last June, Bloomberg carried this article stating that Moody's and S&P are masking $200 billion of subprime bond risk. I quote the following:

"Downgrades by S&P, Moody's and Fitch would force hundreds of investors to sell holdings, roiling the $800 billion market for securities backed by subprime backed by subprime mortgages and $1 trillion of collateralized debt obligations, the fastest growing part of the financial markets."

So far, we have heard about banks and insurance companies taking massive writedowns but not much has been mentioned about pension fund losses on CDOs. We did hear about losses on asset backed commercial paper here in Canada (ABCP) but we have yet to hear any news on CDO losses.

All that may be about to change as CDOs look primed for more distress. Moody's Investors Service recently cut MBIA Inc., a bond insurer, to A2 from Aaa late Thursday - a two-notch downgrade bigger than some investors expected. The ratings agency also lowered Ambac Financial to Aa3 from Aaa.


"Bond insurers, also known on monolines, are important because they guarantee more than $1 trillion worth of securities. When they're downgraded, all the securities they back get downgraded as well - potentially meaning a knock-on effect for investment banks and other financial institutions that bought guarantees from bond insurers to hedge mortgage-backed securities and more complex vehicles known as collateralized debt obligations, or CDOs."

I expect the next wave of downgrades to hit all CDO tranches, including the senior and super senior tranches. A recent analysis by Naked Capitalism clearly explains the problem with CDOs:

"A concern recently voiced in the marketplace, beyond the conflict of interest, is that the rating agencies lack the skills to rate these instruments, since they are often composed of pools of underlying instruments that themselves are difficult to model. For example, mortgage backed securities (which were already tranched) can go into CDOs. To put it bluntly, anyone at a rating agency who is skilled enough to model a CDO will make more money working for an investment bank or money manager, so they cannot hang on to the staff with the crucial know-how.

Now this wouldn't matter so much if these instruments were marked to market. The shortcomings of the rating agencies would be captured in the marketplace (it's common for corporate bonds to trade down before the rating agency works up the nerve to downgrade them). However, pension funds and some other institutional investors are not marking these CDOS to market."

Just like the banks and insurance companies, once pension funds start marking the CDOs to market, they will have to report the losses they suffered from holding these instruments on their books. Once this time bomb explodes it will slam credit markets hard, further exacerbating the ongoing credit crisis.