Showing posts from April, 2019
Show all

Reliance, once dependent on its industrial businesses, reshaped the Indian telecoms industry when it launched its Jio telecoms unit in 2016, taking on rivals such as Bharti Airtel and Vodafone Idea with its cut-throat pricing. 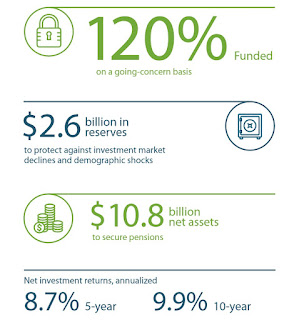 Benefits Canada reports, CAAT pension plan holds steady with 2018 return of 0.5%:
After a year of turbulent markets, the Colleges of Applied Arts and Technology pension plan has released its 2018 annual report, noting assets held steady compared to 2017 at about $10.8 billion, with a slight return of 0.5 per cent net of fees in 2018.

Despite the lower return, the plan improved its funded status, which sits at a healthy 120 per cent on a going-concern basis as of Jan. 1, 2019. “The plan remains strong despite uncertain times,” said Derek Dobson, the CAAT’s chief executive officer and plan manager, in a press release. “Our long-term assessments continue to project that the plan will remain resilient well into the future. The funding reserves provide important protection against difficult-to-predict economic or demographic shocks.”

These results bring the CAAT plan’s annualized five-year net rate of return to 8.7 per cent and …
Post a Comment
Read more

Expect The Unexpected in Stocks? 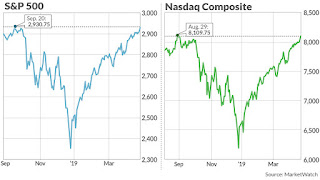 Earlier this week, Morgan Stanley strategist Michael Wilson lamented about the spectacular gains in stocks this year:
“I did not expect us to be at all time highs by April,” Wilson, the firm’s chief U.S. equity strategist, told CNBC during a Tuesday afternoon interview as the S&P 500 index and the Nasdaq Composite Index both punched above their closing highs, and the Dow Jones Industrial wasn’t far behind.

The pace of gains even had Wilson suggesting that the S&P 500 is poised to top another milestone in relatively short order. “We’re probably going to 3,000 in the next couple of weeks,” Wilson said. When a prominent market bear throws in the towel, it either means stocks are headed much higher or we are at an important reversal point.

Which is it? If you ask BlackRock's CEO Larry Fink, the stock market is at ‘risk of a melt-up, not a meltdown’. “Despite where the markets are in equities, we have not seen money being put to work,” Fink said. “We have record amounts of m…
Post a Comment
Read more 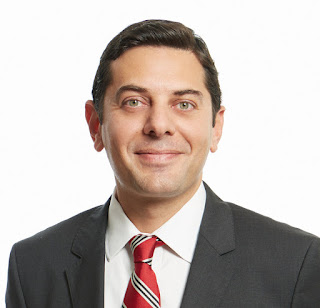 "We are excited to build a platform that leverages our track record, internal talent and partnership model," said Ziad Hindo, Chief Investment Officer at Ontario Teachers'. "It will not be anchored to any particular region, meaning we can go anywhere in the world where there is opportunity."

Olivia Steedman will build and lead TIP as its new Senior Managing Director. Ms. Steedman has been at Ontario Teachers' since 2002. She has been a founding member and senior leader of the infrastructure and natural resources group, …
Post a Comment
Read more

China's Pension System on the Brink? 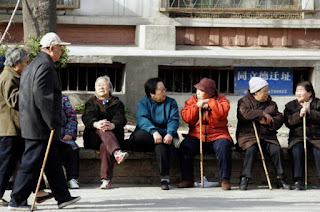 Chief Investment Officer reports that due to an aging population and dwindling workforce, China’s state pension fund could become insolvent by 2035, according to a report from the Chinese Academy of Social Sciences:
“The basic pension system has long faced the challenge of being unable to make ends meet,” said the Pension Fund Actuarial Report 2019-2050. “If it had not been for the financial subsidies, the pension funds would have already begun the net outflow this year.”

According to the report, the urban worker pension fund, the heart of the country’s pension system, held a reserve of 4.8 trillion yuan ($715.5 billion) at the end of 2018. The report forecast the system will peak at 7 trillion yuan in 2027, then steadily decline to zero by 2035.

The report calculated the sustainability of the pension fund until 2050, and expects the number of insured workers, which currently numbers 270 million, will increase by 1% to 2% per year. However, by 2035, the increase ratio is expected to …
Post a Comment
Read more

The Caisse and OMERS recently published their 2018 annual report. Since I already went through their respective results here and here, I wanted to follow up and go over their annual reports to highlight some key investments and other noteworthy topics.

Let me begin with the Caisse. Last week, it published its 2018 Annual Report and put out a detailed press release going over the main highlights:
Caisse de dépôt et placement du Québec today released its annual report for the year ended December 31, 2018.

In addition to a detailed analysis of the financial results announced on February 21, 2018, the report provides a review of its activities. Below are the highlights:

The Responsible Asset Allocator Initiative (RAAI) released its 2019 ranking of the most responsible asset allocators:
The study, developed in partnership with the Fletcher School at Tufts, analyzed 197 funds comprising $21 trillion in assets to identify 25 institutions that set a global standard for leadership in responsible, sustainable investing. This year’s ranking builds on the groundbreaking first release of the report under the auspices of The Bretton Woods II program at New America in 2017.

"The Responsible Asset Allocator Initiative provides a barometer of how the world’s largest financial actors are changing their behavior to address the planet's greatest challenges. The intense competition for inclusion on the 2019 RAAI Leaders List demonstrates that sophisticated investors are embracing a broader definition of fiduciary duty and, increasingly, adopting environmental, social and governance considerations into their portfolio decision-making," said Dr. Tomicah …
Post a Comment
Read more
More posts