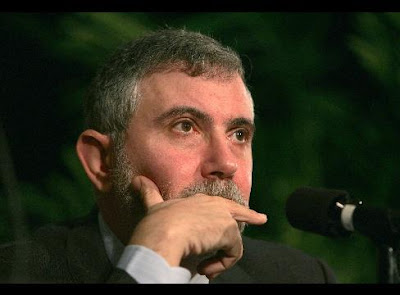 My favorite economist won the Nobel Prize in Economics:

Krugman, 55, was honored ``for his analysis of trade patterns and location of economic activity,'' said the Royal Swedish Academy of Sciences, which selects the winners. His work showed how economies of scale influence trade and urbanization.

While Krugman found broader fame with his newspaper columns attacking Bush, he gained his reputation in economics by arguing countries could gain a competitive advantage through subsidies to key industries. His research helped explain how the development of large-scale production for the world market has attracted more people to cities and led to higher wages.

``What's remarkable about Paul is he manages to do everything. He's a contributor to fundamental economic theory and a top-ranked journalist.''

In a brief telephone interview after the award was announced, Krugman said ``it's a total surprise.''

The Princeton economist's academic work analyzed how world trade came to be dominated by countries that both import and export similar products -- automobiles, for example.

``This kind of trade enables specialization and large-scale production, which result in lower prices and a greater diversity of commodities,'' the Royal Academy said in a statement today.

It may be a surprise to Krugman, but to those of us who studied his theorems, read all his books as well as his NYT op-ed articles, we knew it was only a matter of time.

Congratulations professor Krugman. If you need any ideas on how to invest your prize, please read my last comment.