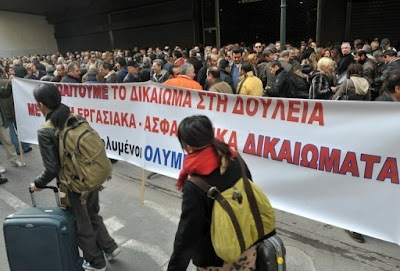 Greece's government on Tuesday unveiled a hike in the average retirement age and called on striking civil servants to accept bonus cuts to pull the country out of an unprecedented financial crisis.

Labour Minister Andreas Loverdos said men and women will retire at 63 on average in a bid to save Greece's cash-strapped pensions system, as other ministers met for a second day to finalise the country's new tax policy.

"There will be a two-year increase of the limits on the average rate of retirement... namely 63 years on average for men and women by 2015," Labour Minister Andreas Loverdos told reporters after a ministry meeting.

"We are changing the pensions system in order to keep it alive," he said.

The maximum retirement rate is currently 65 for men and 60 for women, and Greece is under pressure by the European Union to bridge the gap.

The minister also pledged to bring an end to voluntary retirement schemes that have cost the cash-strapped state dearly.

The pension reform is part of a cost-cutting plan by Greece's hard-pressed Socialist government which is struggling to slash a debt mountain expected to hit over 290 billion euros (396 billion dollars) this year.

Loverdos is trying to save 4.5 billion euros (six billion euros) this year from a social budget burdened by years of mismanaged spending by social funds on medicine and hospital bills.

Greece's main private sector union GSEE is staging a nationwide strike on February 24 in opposition to the pension reform. Thousands of civil servants targeted for bonus cuts are holding another one-day strike on Wednesday.

GSEE chairman Yiannis Panagopoulos on Tuesday said the minister's statements were "vague" as they made no reference to the maximum age of retirement.

"When the government presents its full proposals in a bill, we will discuss them and fight to improve them if necessary," he told private Flash Radio.

But he welcomed the scrapping of voluntary retirement schemes, saying it was "provocative to have miners crawling into holes at the age of 65 and to see other categories retiring after 25 years of work."

The government is trying to prevent this month's industrial action from undermining efforts to jumpstart the recession-mired economy.

The cabinet is meeting for a second day Tuesday to finalise a tax overhaul aimed at netting around five billion euros this year and help plug a budget deficit that hit over 30 billion euros in 2009.

Greece's 12.7-percent deficit is beyond EU limits of three percent of output for eurozone members, and it suffered a triple downgrade of its sovereign debt in December.

Despite assurances from the European Union and the European Central Bank, markets suspect that the government will not be able to enforce the painful reforms promised.

Socialist cadres are already expressing misgivings about the plan according to press reports, but a majority of Greeks appear to support the government.

But the European Union executive arm also placed Greece under a permanent system of monitoring -- a first for the EU -- and rapped Athens over faulty budgetary data tabled by the previous conservative government ousted in October.

Greece doesn't have a choice but to implement pension reforms. And pension tension isn't a problem unique to Greece. Here in Canada, former Nortel employees will face big cuts to pensions, health care, disability coverage and other benefits later this year under a $57-million deal with the insolvent company.

In the UK, the BBC reports that according to the the Pension Protection Fund (PPF), the deficit in final salary pension schemes in the private sector hit £52bn in January, up from £33bn in December.

In New Jersey, legislation requiring public workers to assume a portion of their health benefits costs and providing relief to the beleaguered state pension system has been introduced:

The package of bills introduced Monday follows vows by new Democratic leaders in the state Senate to revisit pension reform recommendations made four years ago but mostly ignored.

One bill requires state, local and school district workers to contribute at least 1.5 percent of their salary toward their health care costs. Another caps at $15,000 the amount of unused sick time that can be cashed in at retirement.

A third bill repeals the 9 percent pension benefit increase put in place in 2001 by changing the way pensions are calculated. The last bill in the package requires the state to make its annual payment to the pension system, not skip it or short it, as has been the custom in recent years.

No figures were immediately available on the potential savings.

Most of the proposals would affect new hires, not those already in the pension system. However, the measure requiring public workers to contribute toward their health care costs would take effect when their current contract expires.

The pension system is underfunded by about $34 billion and is in danger of becoming insolvent unless fixes are made.

As you read this comment, remember that what's happening in Greece is emblematic of what's plaguing most developed countries, albeit in varying degrees. Pension woes are not going away, will get worse over the next decade, and will undoubtedly require tough choices and compromises ahead by all stakeholders.