States in Peril Must Cut to the Bone? 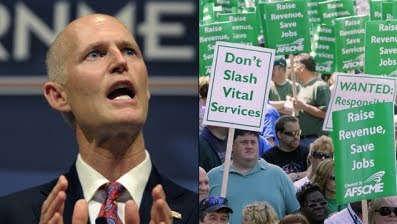 The WSJ reports that U.S. House Republicans said Wednesday they are concerned about a "looming fiscal crisis" in state and local finances but ruled out any federal bailouts for states. This is placing pressure on states to introduce tough budget measures, pitting states against public unions:

Lawmakers around the country are looking at new ways to prevent budget disasters by changing the rules for overburdened state employee pension funds. But they are meeting stiff resistance from public employee unions.

Two Arizona state lawmakers this week, including the speaker of the House, introduced their plan to salvage the state's budget by significantly changing the public retirement system.

Following the lead of Gov. Chris Christie, R-N.J., a pair of New Jersey assemblymen on Monday put forth their legislative solution to make solvent a fund that's $54 billion in the red.

Also on Monday, in his first budget address as governor, Florida's Rick Scott announced his effort to "stabilize and secure" government employee pensions.

The moves are part of a larger battle over pension reform between conservative budget hawks and government worker unions. And the public-sector employees are fighting back hard.

"We're working in partnership with affiliates around the country to wage full-scale battleground campaigns -- to defend our pensions, to fight budget cuts and privatization, to protect collective bargaining and our political power," said American Federation of State, County and Municipal Employees Secretary-Treasurer Lee Saunders at a public pension leadership meeting in Washington late last year.

Saunders's union, a vocal and powerful political force, often in support of Democrats, represents more than 1.6 million state, county and municipal workers who will be directly affected by the reforms proposed nationwide.

The fight for pension reform was certainly a political winner in 2010 for Wisconsin's Scott Walker and Ohio's John Kasich. The Republicans each championed the cause on the way to becoming governor of their respective states. On his first day in office, Kasich sent a letter to state employees explaining how "like any organization, state government has, over time, slowly become too bureaucratic. Together we'll recharge it, reform it, modernize it and, yes, in some cases, make it smaller."

Ron Snell, who keeps track of pension legislation for the National Conference of State Legislatures, said lawmakers are motivated by a double squeeze on pension systems -- the investment market collapse of 2008 and a glut of retirements as Baby Boomers move into their 60's.

The economic difficulty of finding solutions to balance the ledger is matched by the hard political effort that will be needed to take away or curtail benefits for state union employees. Lawmakers who support such plans risk the label of "anti-worker politician" from labor leaders like AFSCME President Gerry McEntee -- a sobriquet often matched with big campaign spending.

"I think what you were hearing from President McEntee was a very legitimate concern that the problems that public employee pensions are facing because of the economic downturn are really being exploited by some politicians who want to use this as an opportunity to attack working families in this country," Scott Wasserman, political director of Colorado WINS, which represents public employees, told Fox News.

Wasserman also attended the December union summit and says states can look to what Colorado accomplished in 2010 as a model for success. "I think there was universal recognition on both sides of the aisle that this was an important problem to fix, " Wasserman said. "And that if we all work together and if there was shared sacrifice from employees and from taxpayers and from retirees that we could actually put out fund on the track to solvency."

But not everyone in Colorado thinks the deal is a swell compromise. Approximately 100,000 retirees are asking a state court to invalidate the law claiming that another part of the plan illegally lowers future cost of living adjustments.

In Florida, Scott said the hard decisions that have been made in the private sector must be made in his state. He's asking workers to contribute 5 percent of their income toward the retirement fund.

"We cannot ask Florida taxpayers, most of whom have no pension at all, to bear all the costs of pensions for government employees," Scott said. "By modernizing the Florida Retirement System, we will save taxpayers $2.8 billion over two years."

Even if states are able to solve the political problems with employee pensions and pass reform legislation, the actual economic benefit from their hard work will not be readily seen.

"Over time, the systems will cost the public substantially less. It won't show up quickly, but it will certainly take care of the problem in the long run," Snell said.

There is no question that state pensions need to be reformed. The question is what type of reforms and how will they benefit all stakeholders? I think there needs to be some give and take from all sides. The fact remains that state pension funds used rosy investment projections and have been neglected for far too long. Nobody bothered putting money in them, and their governance model left them vulnerable to fraud and mismanagement.

And now states are getting squeezed by the credit agencies. CNN reports that Standard & Poor's lowered its credit rating on New Jersey's debt to AA- from AA, citing concerns about its massive retirement obligations:

The state has nearly $33 billion in debt, among the highest in the nation, according to S&P, which rates the state's outlook as stable because it believes it will "continue to manage its structural budget imbalances proactively."

New Jersey has long skimped on funding its pension, leaving it with a current unfunded liability of $54 billion.

Gov. Chris Christie, who took office in 2010, has taken an aggressive approach to handling the Garden State's financial problems. He closed a fiscal 2011 deficit of $11 billion, which was equal to 37% of the budget, by deeply cutting spending and suspending a property tax rebate. He also deferred $3.1 billion in pension funding.

The state faces a budget gap of $10.5 billion for fiscal 2012, which starts July 1, according to the Center on Budget and Policy Priorities. The governor is expected to release his budget in coming weeks.

Responding to the S&P downgrade, Christie called on lawmakers to overhaul the state's retirement system. He wants to raise the retirement age, require workers to contribute to their pensions and curb the annual cost-of-living increases that retirees receive.

"Governor Christie's pension and benefit reforms are necessary to manage the state's pension liability and ensure long-term stability," said Press Secretary Michael Drewniak in a statement responding to the downgrade.

I have no problem with Governor Christie's recommendations but they're missing something important. Reforms are also needed in the governance of the state pension plan. Get rid of rosy investment projections, appoint an independent board, hire seasoned money managers and compensate them properly, aligning their interests with stakeholders' interests. And for Pete's sake, stop skimping on funding your pension!

It's easy to cut, cut, cut and demonize public pensions. Much harder to build and improve on the current retirement system. That's why I get so annoyed with rating agencies and what looks to me like an obvious ideological war on public unions/ pensions (to weaken them so private sector interests can benefit). All these angry people in the US who attack public sector employees and their "generous benefits" should ask themselves what will happen to their vital services when states cut to the bone.