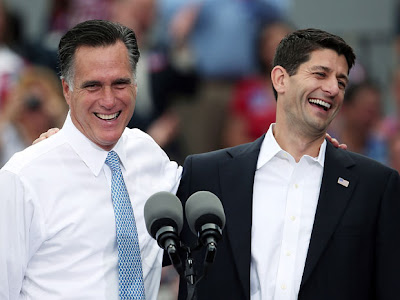 Republican presidential candidate Mitt Romney finally picked a running mate, Wisconsin congressman Paul Ryan. The debt and deficit hawk wouldn't have been my first choice. I would have opted for George Will's choice of a VP candidate, Governor Bobby Jindhal of Louisiana, but Romney wants to stir up the right-wing Christian fundamentalist base.

One thing is for sure, we're in for a long, nasty US presidential campaign. Ryan is despised by Democrats and they have been preparing for this moment for a long time. They will go at him hard and with good reason. The so-called 'Ryan plan' is a recipe for disaster.

The problem I have with all these debt hawks/ austerity aficionados is that they don't realize the underlying problem exacerbating debt and deficit dynamics is lack of good paying jobs, not too much government spending. If you create good jobs, government revenues will increase and debt will slowly come back down.

Sure, you can always cut waste in spending, but the single biggest crisis remains jobs, not debt. America faces a jobs crisis, not a debt crisis. It can literally keep on printing its way out of any debt crisis and so can other countries which control their currency. In short, the US will never experience a Greek-style debt crisis (silly to even suggest this).

Anyways, politics aside, will be interesting to watch how markets react to the news. My feeling is it will be bullish and that's why I titled this comment the 'Mitt Ryan Reflation Trade' (little word play to poke fun at Romney when he introduced Paul Ryan as the "next president of the United States").

US stocks stocks rose on Friday, giving the Standard & Poor’s 500 Index its longest advance since December 2010. Weak Chinese import numbers did not stop the rise in equities. This is yet another signal that stocks will keep climbing the wall of worry.

In my last article, titled " Copper Melt-Up Coming as Miners Reflate ", I argued that copper miners COPX +0.77% on the stock side appear to be ready to have a meaningful period of outperformance after severely lagging broader stock market averages since 2011.

Day after day, market internals continue to confirm that inflation expectations are returning as sector rotation out of defensive areas of the market takes place in favor of cyclical trades. This move appears to be very early based on various intermarket trends and relationships I pay attention to.

Copper miners, however, are not alone in showing renewed signs of strength. The entire metals and mining industry appears to be sending a bullish reflationary message despite continued doubt and skepticism over the market's rally. The Summer Surprise call I made on June 20 arguing for an end to the end-of-the-world trade was also about the persistence of reflation and rising inflation expectations. Metals and mining may be about to surprise as well. 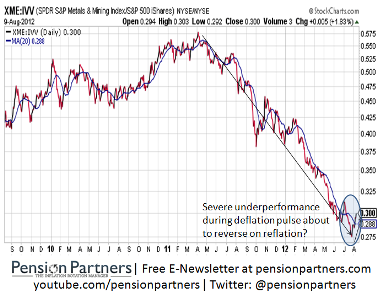 The peak in the ratio of metals and mining occurred in mid-April 2011, just a few short months after I began arguing that a deflation pulse was beating underneath the surface of the market in the very first writing Marc Faber of the Gloom, Boom, and Doom Report published of mine last year.

The continued deflationary scare throughout the year and follow-through post Summer Crash of 2011 made the industry one of the worst areas to be invested in from an opportunity cost standpoint.

However, no price ratio can go down (or up) forever. Leaders become laggards and laggards become leaders. Notice that mid-July this year a spike occurred in the ratio as the group began to outperform. Given that this move is coinciding with other areas of the market which are acting on rising inflation expectations as I noted on Bloomberg last week , I suspect a meaningful period of strength may be in the cards now.

Could this be the start of a recovery in the industry which is, in theory, among the most sensitive to rising inflation expectations?

I think so and have been warning institutional investors to load up on metal and mining shares. I'm particularly bullish on US coal shares where I think we hit a bottom this week after Alpha Natural (ANR) reported a loss. Even Goldman's sell rating couldn't keep this sector down (very bullish).

Michael Gayed even tweeted the chart below stating coal (KOL) having a "coalback" relative to natural gas in what may be the reflation/summer surprise (click on image to enlarge): 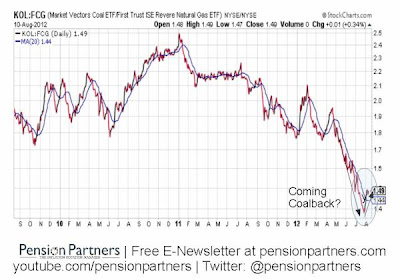 Follow price action very carefully here and ignore the biggest increases and decreases in analysts’ target prices. Analysts are notorious for being late on their calls. Next week, I will show you where top hedge funds and long-only funds placed their bets in Q2 2012 and I suspect they too are playing the reflation trade.

Of course, as always, skeptics abound. Below, Gary Shilling of A. Gary Shilling is not convinced home prices have turned to the upside for good. He thinks a flood of foreclosures could cause home prices to drop another 20%.

I like Shilling and take his deflation arguments seriously but he's totally wrong warning about this excess 'shadow inventory'. If you don't believe me, just look at what the market is telling you. The S&P Housebuilders Index (XHB) bottomed last September and is making new highs.

No matter how smart they are, no guru or hedge fund manager is smarter than the market. I remain bullish on the US economy and think financials and cyclicals have tremendous upside from these levels.

Finally, according to the New York Times, based on his Congressional voting record, Ryan is one of the most extreme VP candidates in the past century, on either side of the aisle.

Below, Aaron Task and Henry Blodget discuss why Romney-Ryan's views on how the US should deal with its budget deficit may alienate many Americans, especially those in the middle class.