Caisse Thinks Bond Party Is Over? 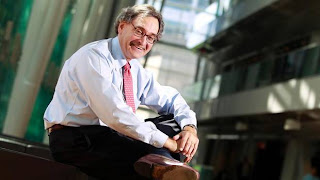 The Globe published an article by Alexandra Stevenson of the Financial Times, Bond party is over, says Caisse chief Sabia:


The bond party is over – this according to one of Canada’s biggest pension fund managers, which plans to cut back significantly on its fixed income holdings.

“Our view on this is that the party is over, that therefore the eight to nines [per cent yield] we were earning are going to be replaced with twos, threes, maybe fours,” Mr. Sabia said.

The Caisse de dépôt manages more than $160-billion in private and public pension and insurance funds in Quebec. It is a big investor in British infrastructure, including a 13.3 per cent stake in Heathrow Airport and a 50 per cent stake in South East Water.

Mr. Sabia said the Caisse de dépôt will lower its $58.8-billion allocation to fixed income by $7-billion to $8-billion next year “as a starting point.” The money will be deployed to finance investments in less liquid assets such as private equity, real estate and infrastructure. The fund’s overall portfolio weighting in such alternative assets will change from a quarter today to 34 per cent.

The pension fund’s sentiment echoes that of GMO, the $104-billion (U.S.) Boston-based asset manager, which said it had “given up” on long-dated sovereign debt. This despite investors continuing to shovel billions into sovereign and corporate bonds, fuelling a rally in bond markets that some commentators warn has approached bubble proportions.

The Caisse de dépôt’s reallocation from fixed income is part of bigger shift away from a relative return approach – which involves benchmarking investments against indices – to focus on an absolute return model.

“I look at the returns that can be made either off the dividend or capital appreciation and I compare that with what we might earn in a fixed income portfolio and for me, that’s a good trade-off,” Mr. Sabia said.

“I’d rather put the money to work there and live with the notional increase in risk [than] from, say, a fixed income portfolio,” he added.

Diminishing returns from bond markets have prompted other institutional investors to question the asset class.

“Looking at valuation, 10-year bond yields in the U.K. and in the U.S. are at historic lows . . . suggesting bond markets have never been as overvalued as they are today,” said Mouhammed Choukeir, chief investment officer at Kleinwort Benson.

Michael Sabia joins a chorus of others warning that the bond party is over. You'll recall AIMCo's CEO, Leo de Bever, called the top on bonds in early May and then warned of storm clouds ahead in June.

More recently, De Bever was interviewed on BNN, warning investors of the risks in the bond market and illiquid alternatives (skip to parts 4 and 5). He flat out states there are basically two scenarios in bonds: "One is terrible, with sustained low yields, and the other is really terrible, which means at some point yields go up and that means returns on long bonds go down." Given a choice, he said he would rather be in stocks but admitted the stock market will be "inherently much more volatile" because returns on stocks "are driven up artificially" by quantitative easing.

As far as alternative investments, he said they're sometimes being used as a "panacea." AIMCo has significant exposure to private equity and infrastructure but "a lot of money has been poured to those markets so you have to be very careful that you're just not going from the frying pan into the fire and that yields are not being bid down to the pint where you're no longer being compensated for the risks you're taking."

So is the bond party over? Yes, it's over but it's also morphing into potentially more dangerous bubbles. Pensions and other investors have fueled the corporate bond bubble to the point where the risk-return tradeoff isn't as appealing. More worrisome,  investors hunting for yield are pushing funds back into CLOs, attracting many inexperienced managers.

Importantly, while the bond party is over, bonds are far from dead. If Europe slips into a protracted debt deflation cycle, dragging the whole world along with it, you could potentially see another Japanese surprise where bonds continue outperforming all other asset classes on a risk-adjusted basis for another decade.

But central banks and global policymakers will fight deflation tooth and nail. Even in Japan, there is a seismic shift going on to introduce inflation into the system. As central bankers pump up the jam, it will lead to more volatility in stocks and bonds.

This is why many large investors like the Caisse and AIMCo are shifting assets intro alternatives, to escape excess volatility in public markets. But as Leo de Bever warns, alternatives are no panacea, which is why I keep warning investors gung ho over the new asset allocation tipping point to temper their enthusiasm and recognize that alternatives present their own unique set of risks.

Below, Josh Lipton of Bloomberg reports on why some well-known bond bears are capitulating, buying Treasuries though the 1.69 percent yield on 10-year notes even though it is less than the rate of inflation and returns on the $10.9 trillion of marketable debt are the least in three years.