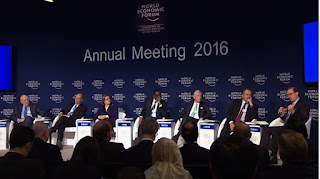 In an era of growing complexity and uncertainty, how can business leaders make decisions for the long-term? At Davos 2016, a panel discussion which included Mark Wiseman, CEO of CPPIB, discussed "The Long Term Imperative."

The discussion was moderated by Victor Halberstadt, Professor of Economics, Leiden University, Netherlands and the speakers include:

Take the time to listen to this discussion below. It's not a sexy topic, especially in a world where the electronically lobotomized masses suffering from chronic ADHD focus on Instagram, Facebook, Twitter, iGadgets, Apps, and daily swings in the stock market, but the panel tackles some very important and complex issues which are critical to the future of capitalism.

These are all very smart and accomplished people but the person that impresses me the most is Andrew Liveris, Dow Chemical's CEO (and I'm not biased because of his Greek roots). Liveris is very experienced, extremely sharp and he raises a lot of great points in this discussion which every corporate CEO is struggling with.

But all the panelists raise great points. There were a few zingers in this discussion. At one point, Larry Fink took on pensions: "Some of the loudest pension funds who talk about long term, without naming them, are actually the largest investors in activist hedge funds."

At the end of the discussion, Mark Wiseman raised a great point that "activists are not the cause of the issue, they are the symptom. And the symptom is where are the other 97% of the owners? ...When activists that have 3% or 4% -- and sometimes no economic interest because they've hedged out the other side -- are able to force change, to me the problem is that the other 97% are not acting like owners."

All these pension funds "with a very long investment horizon" increasingly allocating billions to activist and other hedge funds to make their return target are part of the problem, funding hedge funds which take a minority stake and are then able to force corporate leaders to drop their long term view and focus on short term actions to "unlock shareholder value" (a euphemism for show me the money now!)

I know this is a widely contested issue and I'm not implying that activist hedge funds are all evil, clearly they're not. But there is a problem and the truth is large public pension funds investing billions in hedge funds and private equity funds are fueling rising inequality which is deflationary and very disruptive on a short term and long term basis.

I'll let you watch the panel discussion below and mull over their comments and my comments above. If you have anything to add, feel free to reach me at LKolivakis@gmail.com.

By the way, please don't forget to subscribe and donate to my blog on the right-hand side under my picture. I should remind all of you that nobody is taking care of my short term or long term interests, except for yours truly, so do the right thing and support this blog through your financial contributions. Thank you!!