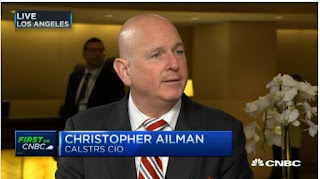 Tom DiChristopher of CNBC reports, The 2 and 20 hedge-fund model is dead:


The compensation model that has enriched hedge fund managers for years is not long for this world, CalSTRS Chief Investment Officer Christopher Ailman said Monday.

To find yield in the current low-interest-rate environment, CalSTRS has invested in select hedge funds. But Ailman said the pension fund is not paying the alternative investment class's notoriously high fees.

"Two and 20 is dead. People have to understand that. That model has been broken," he said during an interview on the sidelines of the Milken Institute Global Conference on CNBC's "Squawk on the Street." Ailman was referring to the typical hedge fund fee structure in which portfolio managers charge 2 percent of total asset value and 20 percent of the portfolio's returns.

Investors pulled more than $15 billion from hedge funds in the first three months of the year, making it the worst quarter for managers in seven years, the Financial Times reported last month.

To be sure, CalSTRS has considerable heft to negotiate, being the nation's second-largest pension fund with a portfolio valued at about $186.8 billion as of March 31.

"We have a size advantage," Ailman said. "We already are negotiating. Our staff has put on their boxing gloves and gone in there and just laid it out, what we're looking for."

Ailman acknowledged that new funds will continue to ask small investors to pay 2 and 20, but said in most cases the split has come down.

CalSTRS is currently pursuing a risk-mitigation strategy, but not because it is worried about the broader market, he added.

"It's all back to that point of having a balanced portfolio, being exposed to GDP growth, but then also having some balance on the other side because we are going to have U.S. recessions and we're going to have global recessions," he said.

"This is a low patch, but we think, overall, growth will come through."

In my last comment on hedge funds under attack, I discussed why I think it's insane to give any multibillion hedge fund 2 & 20 to manage assets, especially in a deflationary world where ultra low and negative rates are here to stay.

Paying 2 & 20 is even more insulting when hedge funds aren't delivering on their promise. And when you have brand name funds like Tiger Global’s flagship Onshore fund declining 22% (gross) in the first quarter, it really stings to have to pay these guys any management fee whatsoever (long gone are the days where the Tiger fund was burning bright and I warned you to stop chasing after "Chase Coleman" and other hedge fund superstars getting crushed).

While Fuller declined to provide specifics, some big pensions are feeling pressure to cut costs and have pushed hedge funds to lower their fees. Others including CalPERS, the largest US public pension plan, have pulled their money from hedge funds.

The New York state pension, the country’s third-largest, spent $113 million on hedge fund management fees in the fiscal year ended March 31, 2015. During that period, the pension had 4.5 percent of its assets in hedge funds, which generated a 5.9 percent return.

Not sure Fuller's team really knows what they're doing when it comes to hedge funds. If I were her, I'd seriously consider bailing from hedge funds too and let these billionaires sell their summer homes to pay off the fees they've stolen accumulated over the years from their (no longer) patient clients.

I have strong views when it comes to hedge fund and private equity fund fees (at least PE funds have a hurdle rate and a clawback). I believe in paying for performance, not asset gathering. Period. I couldn't care less who the manager is, how long they've been in business, how rich and famous they are. All this is irrelevant to me as I truly believe the good times are over for the world's hedge fund and private equity billionaires which have gotten away with murder for many years.

Now that hedge fund managers are losing their swagger, and institutional investors are waking up and redeeming from individual funds and funds of funds charging an extra layer of fees, it's going to be a lot tougher for hedge funds to justify their fees.

I will let you listen to Chris Ailman's remarks below. He's right, large pensions aren't paying 2 & 20 anymore (more like 1 or 1.5 & 15 if they have leverage to negotiate hard). This is especially true when it comes to investing in large, multibillion, liquid hedge funds strategies.

However, when it comes to emerging hedge fund managers, it only makes sense to give them a 2% management fee to help them get off and running and cover fixed costs. Also, a lot of the less liquid strategies will still charge hefty fees because they won't grow past a few hundred million dollars of assets under management (typically their investors are large family offices or small endowments looking for very niche strategies).

Lastly, and a bit critically, I don't consider CalSTRS an expert in hedge funds. They were very late in the game, which is fine, but they certainly don't have an external hedge fund program that matches the one at Ontario Teachers' Pension Plan or the ones at other large Canadian pensions who actually know what they're doing in hedge funds.

I used to invest in CTAs, global macros and L/S Equity funds. I don't think they're the best way to generate consistent alpha in hedge funds. In fact, if you look at the last few years, the best hedge funds were multi-strategy funds (this year is much tougher for them). I understand why CalSTRS is investing in CTA and global macro funds for scalable "non-correlated" alpha but I think they need to review their entire hedge fund program which is still in its infancy.

By the way, all of you paying 2 & 20 to any hedge fund should carefully read my last comment on billionaires bearing stock tips. I don't get any respect for the insights I provide you but that's fine, my short metal and mining (XME) and long biotech (IBB or XBI) is paying off handsomely today (yes, despite huge volatility, I'm still loading up on biotech and think the sector will run much higher in the second half of the year; conversely, I'm short any sector than ran up due to US dollar weakness and that includes energy, metals and mining, industrials, emerging markets, gold, etc.).