Quebec Holding Out on Pension Reform? 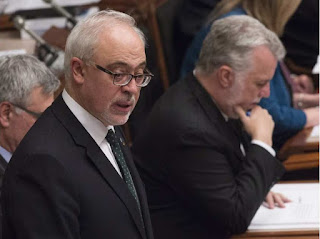 Paul Delean of the Montreal Gazette reports, Quebec is still holding out on pension reform:


Possible changes to the Quebec Pension Plan and the merits of a trust fund for a relative on welfare were among the topics raised in the latest batch of reader letters. Here’s what they wanted to know.

Q: “The other provinces and the federal government appear to have come to an agreement on changes to the Canada Pension Plan (CPP). Where does this leave Quebec?”

A: Not budging from its holdout position, at least for now. Quebec Finance Minister Carlos Leitāo told the Montreal Gazette that Quebec isn’t obliged to adopt the reforms, since it runs its own retirement plan (Quebec Pension Plan), and the same issues that kept Quebec from signing on to the federal proposals last summer haven’t gone away.

Leitāo said Quebec has a lot of low-income workers who would find themselves paying more in contributions from their weekly paycheques, only to have the extra pension cash in retirement cut into the guaranteed income supplement available to low-income earners. “They’re worse off with this type of change,” he said.

Quebecers already pay slightly higher dues for the Quebec Pension Plan than other Canadians do for CPP (5.325 per cent of pensionable earnings up to $54,900, compared to 4.95 per cent for CPP) and payroll taxes for Quebec businesses (which include the employer’s matching QPP contribution) are higher than elsewhere.

The new CPP deal, going ahead after British Columbia approved it this month, will be phased in between 2019 and 2025. It will raise the CPP contribution rates of workers and employers and the amount of employment income on which those contributions are charged. In exchange, workers will get significantly higher benefits — as much as 50 per cent more, Ottawa says — from CPP in retirement. Someone with $50,000 in constant earnings throughout their working life would receive $16,000 annually from CPP instead of $12,000 now, the government said.

Ottawa said it’s cushioning the blow on low-income earners by enhancing its working income tax benefit and making the extra CPP dues tax-deductible. Leitāo said Quebec isn’t standing pat, just taking the time to study the issue further over the next year to make sure it implements reforms appropriate “for Quebec reality.” Since the federal changes aren’t coming until 2019, “we have time,” he said.

Quebec Finance Minister Carlos Leitāo raises excellent points on how a change in rising premiums would impact Quebec's low-income workers. These are well-known issues not just in Quebec but in the rest of Canada where enhancing the CPP could leave low-income workers worse off.

But Leitāo isn't slamming the door shut on enhancing the Quebec Pension Plan (QPP) and if you ask my opinion, Quebec being Quebec, will take it's time to study this proposal but in the end it will have no choice but to adopt the exact same policy as the rest of Canada.

Why will Quebec follow other provinces and enhance its retirement system? Because if Quebec doesn't adopt some sort of enhanced QPP, it will risk being left behind the rest of Canada in terms of long-term economic growth (policymakers need to understand the benefits of DB plans for the overall economy).

And as a friend of mine pointed out, in a competitive labor market, people will move where they can retire in dignity and security with more money, so it's difficult to envisage Quebec being the sole holdout in terms of enhancing its pension system.

In my last comment, I went over the malaise of modern pensions, discussing the intellectual underpinnings of my position on enhancing the CPP for all Canadians.

Quite simply, in a ZIRP & NIRP world where ultra low rates and the new negative normal are here to stay, the pension Titanic will keep sinking but some pensions, defined-contribution (DC) plans in particular, will sink much further and leave millions struggling with pension poverty while others, like large well-governed defined-benefit (DB) plans, will offer workers the ability to retire in dignity and security.

And as I keep emphasizing, regardless of your political and ideological views, good pension policy is good long-term economic policy, especially in societies with aging demographics where people can't afford to retire in dignity and security.

And the answer to this retirement crisis does not lie in more education and low-cost exchange traded funds (ETFs). Sure, everyone can learn and build on CPPIB's success, but low cost ETFs are no panacea (especially not now) and definitely no substitute for a large, well-governed defined-benefit plan backed up by the full faith and credit of the provincial or federal governments.

There is a reason why the public sector unions of Quebec City approached the "big bad Caisse" to handle the retirement savings of their members, it's in their best interests over the long run.

And my bet is when Quebec Finance Minister Carlos Leitāo comes back to discuss the results of their study, if it's done properly, they will also follow other provinces and enhance the QPP for all Quebec's workers and adjust it for low-income workers so as to not penalize them. Not to do so would be a grave and foolish long-term policy mistake.

Below, an older clip from my comment on the brutal truth on defined-contribution plans which explains why DC plans, registered retirement savings plans and pretty much anything which isn't a large, well-governed defined-benefit pension plan leave millions of workers exposed to pension poverty, impacting long-term economic growth.