A Jittery Week on Wall Street? 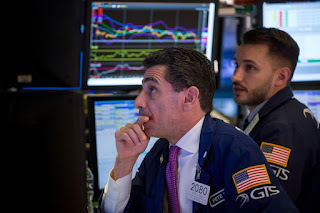 
J.P. Morgan is telling its clients to make the most of the market's massive sell-off this week, as it's almost over.

The bank's widely followed analyst Marko Kolanovic said the dip was largely technical and followed the same selling template as the Dow's massive drop in February.

"Given that equity indices already experienced comparable declines to February (and e.g. Russell 2000 even a bigger drawdown), we think that the current setup favors buying the dip," Kolanovic, J.P. Morgan's global quantitative and derivatives strategy analyst, said in a note to clients Friday. "A risk to the thesis is that market volatility continues to move higher which would result in further outflows from Volatility Targeting funds."

February fears were largely similar to those of this week: rising yields and the Fed's more hawkish stance. U.S. stock markets struggled to regain footing Friday after a 1,300-point drop earlier in the week.

"This risk is now balanced, and can turn into a positive impact, i.e. option hedgers buying equities," Kolanovic said.

Kolanovic is regarded by many as an expert in volatility and derivatives and has gained some notoriety for his timely market calls. Some cite the circulation of his note on trading floors as a reason why stocks rolled over during a trading session in July last year.

The analyst said selling by CTAs, or commodity trading advisors, is "likely largely behind us," and tends to happen relatively fast.

"CTAs have already executed the bulk of their selling," he said. "The remaining part of systematic selling is from volatility targeting (insurance, parity funds, etc.) which will go on for several more days."

Kolanovic said he expects the market to go higher into year-end and maintained the firm's S&P 500 price target of 3,000.

"We expect a net positive earnings season in October, strong buyback activity in November, and positive seasonal effects in December," he said.

It's been a volatile week on Wall Street, following a brutal selloff on Wednesday and Thursday, stocks bounced back on Friday but still lost 4% this week.

So what's going on? Every time we se these brutal selloffs, different analysts blame it on CTAs, others on risk-parity funds, others on volatility targeting funds, etc.

My take is very simple, nothing goes up in a straight line and the increase in rates is making all risk assets (not just stocks) a lot more volatile.

In fact, last week I warned my readers the rate rise could signal market trouble but I also said the backup in yields was overdone.

Still, this isn't an environment for risk-takers. You can ignore the first few rate hikes but when we reach number 8 and counting, the cumulative effects of those rate hikes start biting financial markets and the real economy (with a lag).

Not surprisingly, the stocks that got pummeled the most this week before bouncing big on Friday were momentum favorites like Square (SQ) and Roku (ROKU) which were flying high this year prior to this week's selloff: 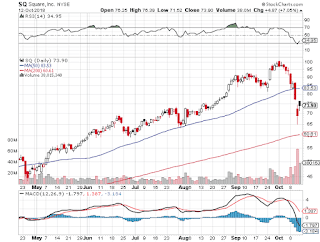 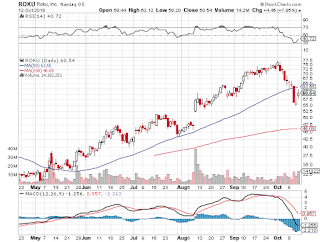 There were plenty of others but the point I'm making is the stocks that sold off the most were the high-flyers that ran up the most prior to this week.

Of course, you'd expect this but I would be shocked if this group of momentum stocks bounces back to make new highs this year given the rise in rates. At one point, gravity takes over and in the financial world, rates act as a weight on stocks.

Still, the technical damage is there and there could be a bounce in stocks following a terrible week: Still, I doubt we will see new highs on the S&P but I want to emphasize something, it's not time to panic just yet.

Taking a step back and looking at the five-year weekly chart on the SPY, you will see this is just another dip to its 50-week moving average. If it holds and starts to climb higher, great, but if it doesn't and starts heading lower, watch out, it could get ugly: 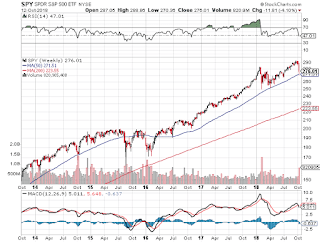 For me, the problem remains the Fed and what is going on outside the US, particularly in emerging markets. If deflationary forces spread to the US, stocks are cooked for the rest of the year and next year too.

That all remains to be seen, it's too early to speculate on where stocks are headed but my antennas are up and yours should be too.

Below, the best interview of the week. Jeff Gundlach says massive bond issues coming, homebuilders already entered bear market and higher rates from here will negatively impact the stocks and real estate markets. If it doesn't load below, watch it here, great insights.