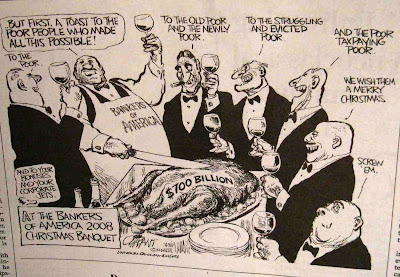 There is not much to report about this Christmas except to tell you that the Massachusetts state pension fund lost $2 billion last month, bringing its loss for the year to $16.1 billion, the worst performance since it was formed:

The drop brings the assets under management in the fund, which is controlled by state Treasurer Timothy Cahill, to $37.6 billion, according to a memo from Stan Mavromates, the chief investment officer. He said the fund's emerging markets portfolio is leading the decline, falling 58.6 percent so far this year.

The return on the fund, which is used to pay the pensions of public sector retirees, is down 30.1 percent for the year through the end of last month, according to Mavromates.

Prior to this year, the worst year on record was 2002 when the assets under management dropped 8.9 percent, according to information obtained from the treasurer's office.

Given Mass PRIM's heavy allocation to equities and alternative investments, they will likely experience further setbacks in 2009. However, I will commend them on providing clear transparency on their benchmarks and investment activities.

You can expect most of the large pension funds who have similar exposures to equities and alternative investments to be down between 30% and 40% this year.

This isn't much of a Christmas for millions of people struggling to find work. Who is to blame for this global financial mess? I am with religious leaders who in their Christmas sermons blame the culture of greed and immorality within the banking system for the financial crisis:

Archbishops devoted their annual messages to the human suffering caused by the global economic downturn, and called for communities to come together to support those who lose most in the turmoil.

Dr John Sentamu, the Archbishop of York, attacked exploitative money lenders who pursued "ruthless gain" and urged banks not to "enrich themselves at their poor neighbours' expense".

He compared the looming recession to the conditions Britons endured during the Second World War, and called for a new generation to show the "Blitz spirit" that helped defeat the Nazis.

"True charity repudiates the idea of personal gain as a result of lending money to make ruthless gain – usury – bringing about permanent disappropriation and enslavement," he told a York Minster congregation including Conservative leader David Cameron and his family.

"In the present economic crisis we need to rediscover that spirit of togetherness that helped the British people during the Second World War to stand together in the face of food rationing and the Blitz.

"We had better stand together or we will all hang separately economically."

Dr Rowan Williams, the Archbishop of Canterbury, said that people should not waste time waiting for "larger-than-life" heroes to bring comprehensive solutions to the ills of the world.

Relief from the crisis will come through "small and local gestures" from individuals, he said at Canterbury Cathedral.

"In the months ahead it will mean in our own country asking repeatedly what is asked of us locally to care for those who bear the heaviest burdens in the wake of our economic crisis – without waiting for the magical solution, let alone the return of the good times."

Last week Dr Williams sparked a political row by criticising Gordon Brown's economic recovery plan, likening measures to boost consumer spending to an "an addict returning to a drug". He also claimed that the credit crunch was a welcome "reality check" for a society that has become driven by unsustainable greed.

Yesterday the leader of the Catholic church in England and Wales used his Christmas message to speak about the breakdown in trust prompted by the credit crunch.

Cardinal Cormac Murphy-O'Connor, Archbishop of Westminster, said that recent examples of "spectacular" misbehaviour by financiers would make it very difficult to rebuild trust in the global economic system.

In a homily at Midnight Mass in Westminster Cathedral – widely expected to be his last before the Vatican announces his successor in the New Year – he said that millions of people in this country now felt so let down by financial institutions that they were "deeply anxious" about the future for themselves and their families.

He said: "Christianity neither condemns nor canonizes the market economy – it may be an essential element in the conduct of human affairs."

"But we have to remember that it is a system governed by people, not some blind force like gravity."

Thank God this world is not made up solely of greedy bankers. There are many good people out there spreading the Christmas cheer, including retirees who give back to their communities.

But those bankers and the pension fund turkeys who fell for their marketing ploys really irk me. I can't wait till Dennis Kucinich grills them the same way he grilled Neel Kashkari on the bailout scam (click on embedded video below).

I wish all of you a Merry Christmas and a Happy Holiday Season. I hope you enjoy many years of health and happiness with your family and friends.