Imperialism and Financialism: A Story of a Nexus? 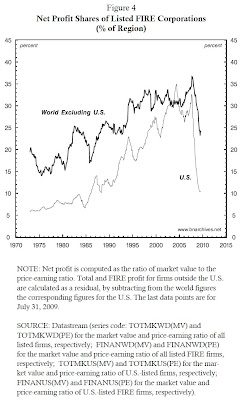 Earlier this week, I had my quarterly dinner with the Men's club at Alep restaurant in Montreal. The last time we met was when that shady Bilderberg group was supposedly plotting to sink the global economy.

Once again, Tom Naylor forgot to order the lamb dish, but I quickly corrected his mistake and shared it with Ken MacKenzie and our most esteemed El Presidente, George Archer. It was a small gathering but Sam Noumoff was there, visiting us from Spain where he now enjoys his retirement.

I had a chance to discuss the political economy with Jonathan Nitzan who is an associate professor at York University. Jonathan told me to read his new book, which he co-authored with his collaborator Shimshon Bichler, Capital as Power: A Study of Order and Creorder:

Conventional theories of capitalism are mired in a deep crisis: after centuries of debate, they are still unable to tell us what capital is. Liberals and Marxists both think of capital as an 'economic' entity that they count in universal units of ‘utils’ or 'abstract labour', respectively. But these units are totally fictitious. Nobody has ever been able to observe or measure them, and for a good reason: they don’t exist. Since liberalism and Marxism depend on these non-existing units, their theories hang in suspension. They cannot explain the process that matters most – the accumulation of capital.

This book offers a radical alternative. According to the authors, capital is not a narrow economic entity, but a symbolic quantification of power. It has little to do with utility or abstract labour, and it extends far beyond machines and production lines. Capital, the authors claim, represents the organized power of dominant capital groups to reshape – or creorder – their society.

Written in simple language, accessible to lay readers and experts alike, the book develops a novel political economy. It takes the reader through the history, assumptions and limitations of mainstream economics and its associated theories of politics. It examines the evolution of Marxist thinking on accumulation and the state. And it articulates an innovative theory of 'capital as power' and a new history of the 'capitalist mode of power'.

Jonathan also sent me a link to a new paper he co-authored with Shimshon, Imperialism and Financialism: A Story of a Nexus:

Over the past century, Marxism has been radically transformed in line with circumstances and fashion. Theses that once looked solid have depreciated and fallen by the sideline; concepts that once were deemed crucial have been abandoned; slogans that once sounded clear and meaningful have become fuzzy and ineffectual.

But two key words seem to have survived the attrition and withstood the test of time: imperialism and financialism.

Talk of imperialism and financialism – and particularly of the nexus between them – remains as catchy as ever. Marxists of different colours – from classical, to neo to post – find the two terms expedient, if not indispensable. Radical anarchists, conservative Stalinists and distinguished academics of various denominations all continue to use and debate them.

The views of course differ greatly, but there is a common thread: for most Marxists, imperialism and financialism are prime causes of our worldly ills. Their nexus is said to explain capitalist development and underdevelopment; it underlies capitalist power and contradictions; and it drives capitalist globalization, its regional realignment and local dynamics. It is a fit-all logo for street demonstrators and a generic battle cry for armchair analysts.

The secret behind this staying power is flexibility. Over the years, the concepts of imperialism and financialism have changed more or less beyond recognition, as a result of which the link between them nowadays connotes something totally different from what it meant a century ago.

The purpose of this article is to outline this chameleon-like transformation, to assess what is left of the nexus and to ask whether this nexus is still worth keeping.

I urge you to carefully read the entire paper and I quote the following:

But the facts in Figure 4 (click on image above) seem to tell a different story. According to the chart, the United Sates has not been leading the process. If anything, it seems to have been ‘dragged’ into the process by the rest of the world...

Indeed, even the most recent period of crisis seems at odds with the theory. Ac-cording to the conventional creed, both left and right, the current crisis is payback for the sins of excessive ‘financialization’ and improper bubble blowing. In this Galtonean theory, deviations and distortions always revert to mean, ensuring that the biggest sinners end up suffering the most. And since the U.S. FIRE sector was supposedly the main culprit, it was also the hardest hit.

The only problem is that, according to Figure 4, the U.S. wasn’t the main culprit. On the eve of the crisis, the extent of ‘financialization’ was greater in the rest of the world than in the U.S. And yet, although the world’s financiers committed the greater sin, it was their U.S. counterparts who paid the heftier price. The former saw their profit share decline mildly from 37% to 25% of the total, while the latter watched their own share crash from 32% to 10%.

The gods of finance must have their own sense of justice.

After reading this paper, hedge fund managers like George Soros might want to go long the U.S. FIRE sector and short the rest of the world's FIRE sector. Mr. Soros should also consider joining us at the next Men's club meeting where we can discuss Marx, Veblen, Keynes and even Popper over some wine and great food.

I hope you all enjoyed this latest edition of food for thought. Enjoy the long weekend.