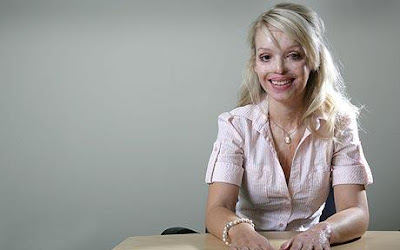 The model and aspiring TV presenter before the attack has received thousands of supportive messages from the public.

In her message, appeared in a Cutting Edge documentary titled Katie: My Beautiful Face this autumn -she reflects on her progress over the last year and how strangers' words of kindness have helped her to move forward.

Piper was left fighting for her life after former boyfriend Daniel Lynch raped her and then arranged for another man to hurl the corrosive liquid.

The acid burned through all four layers of skin on her face, some spilling down her throat, and she was left blind in one eye.

Piper has undergone more than 30 operations on her face and throat.

But she tells how it took the tragedy for her to reassess her ''self-obsessed'' life.

Piper says: ''This year I wanted to give a Christmas message to everybody out there who might have had a Christmas like I did last year.

''In March 2008 I was attacked with acid and left fighting for my life. I was at an all time low, too scared to leave the house.

''I didn't see how things could ever get better.''

She says that before the attack she would go home to her parents on Christmas Eve and: ''Have a few drinks, see them, spend Christmas Day with them chilling out and go home on Boxing Day.

''My life before was very self-absorbed, self-obsessed and it took a tragedy for me to reassess my life and how I felt and what I thought was important.''

Lynch sent Piper a message on Facebook and the pair began dating, but the martial arts fan quickly became obsessively jealous. He raped Piper in a London hotel room.

Lynch refused to let her return home for hours afterwards and telephoned her, insisting that she visit an internet cafe near her flat and mysteriously asking what she was wearing.

This was so that he could direct Stefan Sylvestre to throw acid over her.

In the wake of the attack and only able to communicate by writing, she told her mother Diane ''kill me''.

Piper decided to go public to raise awareness of the plight of burns victims.

''Earlier this year I decided to make a documentary telling my story.

''The night before it went out I was so nervous, frightened that when people see me they might think that I was a freak. Overnight my life changed completely.

''I was able to move forward instead of looking back.

''To see that over 200,000 people have posted encouraging, loving messages of support on the internet, it's just simply amazing. It's such a great feeling to feel so supported by people.

''My Christmas message would be to tell people that I used to hide away and be ashamed of how I looked, frightened of people's reactions and if people are doing that or feel that way now, I would urge them not to because they don't have to feel like that and you can become accepted, you can regain the confidence.

''And for the people that need to do the accepting, that maybe they freak out when they see somebody who's different, you absolutely don't have to.''

In court Lynch, who was jailed for life with a minimum of 16 years and Sylvestre who was sentenced to life with at least six years, were told by the judge that they were ''the face of pure evil''.

Piper says of the response she has received: ''All these letters... have given me so much confidence, a massive amount of confidence and changed the way I am living my life and I really hope that it can show other people that these aren't just for me, these are for everybody who's feeling the way I once felt.

''Even when you think things can never move forward and you feel so low there's always a way out and I never thought that I'd be sat here saying this, never.''

Piper has also launched a charity, the Katie Piper Foundation, to help other burns victims. To subscribe or to make a donation go to www.katiepiperfoundation.org.uk.

As you gather around this holiday season, keep in mind that many people aren't as fortunate as you. Katie's message is simple and powerful. Her unbelievable courage exemplifies what the true meaning of Christmas really is. It's not about gifts, food, and superficial things. It's about peace, hope and perseverance. It's about cherishing the beauty of life and those we love all around us.

I wish you all a Merry Christmas, Happy Holidays and a Happy New Year. I will be posting on and off, but I just wanted to send you my best wishes.

ABC's 20/20 covered Katie's courage in overcoming this horrific attack in Model's Dream Derailed by Acid Attack. Please watch it, she's an incredible young lady. And don't forget to donate to her foundation.