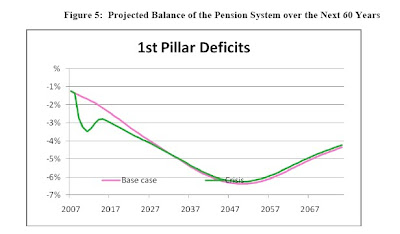 Bill Tufts, publisher of the blog Fair Pensions for All, gave me a heads up that the World Bank released a report on Tuesday, Financial Crisis Hits Pension Systems in Europe and Central Asia:

The financial crisis has significantly impacted pension systems in the countries of Europe and Central Asia (ECA)* and many of the governments have been tempted to make policy changes in response to the increased pension deficits, says ‘Pensions in Crisis,’ a World Bank Regional report released today.

But despite the severity of the crisis, it pales in comparison to the demographic crisis which the region will face, and World Bank experts urge countries in the region not to make any policy changes focused on addressing short-term fiscal concerns that make the long-term even worse.

The new report analyzes the impact of the financial crisis on pension systems of ECA countries, reviews the initial policy responses by individual governments, and provides recommendations on how to strengthen pension systems in the region both in the short- and long-term. World Bank experts concluded that though pension systems in ECA come in all shapes and sizes, no pension system, however well structured, proved immune to the crisis.

“The financial crisis affects each component of a pension system differently, and while magnitude and timing may be different, each component is adversely affected,” said Anita Schwarz, main author of the Report and the World Bank Lead Economist in the Europe and Central Asia Region. “Sharp falls in output and reduction of the overall tax base reduced public funds available for pension systems, while at the same time growing unemployment, drops in wages, and depreciation of financial assets negatively affected systems financed by worker and employer contributions.”

The new study finds that ECA countries, once hit with a sudden shock to the fiscal balances of their pension systems, started considering and implementing policy changes that both increase resources and cut expenditures. The report warns policymakers that actions which generate short-term benefits may involve additional costs in the future. According to one simulation, even the most severe scenario of the financial crisis pales in comparison with the effects of the demographic crisis that is looming in the region.

“It is alarming to look at what the Europe and Central Asian countries are soon to face as the region continues to age,” said Schwarz. “Future pension system deficits can be threefold than what is currently expected, and are expected to remain at that level for more than 20 years before slightly improving. Policymakers need to use the opportunity of the current crisis to address long-term issues, which could bankrupt pension systems precisely when the numbers of people who need them are growing.”

Given the diversity of ECA countries, there is no one blueprint for reforms. Broadly, the report recommends – depending on the country – a combination of measures, including moving to inflation indexation of pensions after retirement, increasing the retirement age and equalizing the retirement age of men and women, and reducing early retirement.

In addition, it suggests provision of better insurance against the volatility of financial markets, and calls for the acceleration of regulatory and supervisory reforms that will allow pension funds to earn better rates of return along with further development of capital markets. Finally, it urges governments to promote awareness among their citizens that public pensions will need to be less generous than in the past if they are to be sustainable.

You can read the full report by clicking here. There is also a summary of the report available here. I quote the following:

Policymakers need to be cautious that their response to this crisis does not exacerbate the next one.

In past crises, governments have responded to rising unemployment by loosening early retirement and disability restrictions. Increased retirement now will shift the baseline deficits even higher as potential revenues decline and expenditures rise. Raising contribution rates in some types of systems raises liabilities for the future. Transferring second pillar contributions to the first pillar also involves an increase in future liabilities for the first pillar.

As I have stated before, the global pension crisis will unleash a serious demographic deflationary wave on the global economy. Uncle Ben and other central bankers are in for a long, tough slug ahead. That's why they're doing everything in their power to spur asset inflation and hopefully limit the damage as much as they can. I wish them luck, because when it comes to the global pension crisis, they're truly pushing on a string.

[Note: Read Tom Croft's comments on dark pools at the end of my last post of seeking alternatives.]