A Greek Sigh of Relief? 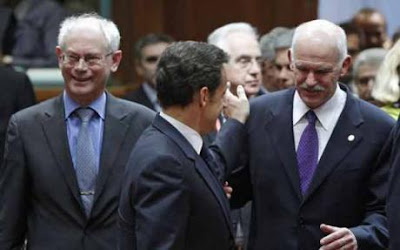 After weeks of discord, Europe's leaders have agreed to an emergency facility for Greece backed by the International Monetary Fund and bilateral loans from eurozone states.

The accord was vague on figures and aid can be invoked only as a "last resort" if Greece is shut out of the capital markets. Since Greece is already paying an untenable debt premium, the wording once again leaves it unclear what exactly has been settled.

Angela Merkel, the German Chancellor, and Jan Peter Balkenende, the Dutch premier, leaders of the two key creditor states, imposed their demand that the IMF must be central to any rescue.

While the Eurogroup is to play a "co-ordinating" role, Germany and Holland will retain a veto over use of the facility. Greece said it was "satisfied" by the terms.

The accord masks a bitter struggle between Germany and a French-led bloc over the future shape of Europe. For all the rhetoric, Berlin has refused to cross the Rubicon towards an EU fiscal union, shattering long-held assumptions about the inevitable march of the EU project. By bringing in the IMF, it ensures that each sovereign state remains responsible for its own debts.

A host of questions remain unanswered, not least whether the IMF's board will disburse funds without retaining control over austerity plans, or whether it will accept EU conditions at all. The IMF usually imposes devaluations and steers monetary policy. When public debt is already too high – as it may be in Greece at 125pc of GDP this year – the Fund can engineer a controlled default.

Jean-Claude Trichet, head of the European Central Bank, said it was a "very, very bad idea" to let the IMF into the eurozone, a foretaste of how hard it will be for the Fund to work with EU bodies.

The euro fell below $1.33 against the dollar on Mr Trichet's comments. Investors have learned in any case to treat EU summit headlines with a pinch of salt. A string of rescues over the past six weeks proved little more than bluff.

The package is to be about €22bn (£20bn) with a "substantial " share from the IMF and a "majority" from Eurogroup states, at stiff interest rates. This barely tides Greece through to the end of the May. It cannot be triggered until Greece faces default. The ECB says this risks delaying until the fire is out of hand.

The concern in the markets is that Greece will need more support before long if austerity measures cause a deeper slump this year than the 0.8pc contraction forecast by Athens. Deutsche Bank expects the Greek economy to shrink 4pc this year. This would play havoc with public finances, perhaps tipping the country into a self-feeding slide.

"There are huge risks in this new adventure," said Jacques Cailloux, Europe economist at RBS. "We think the first stage will be cash on the table and that will be enough to calm things down until next year. This is a last chance for Greece. If it goes wrong there may have to be talk later of debt restructuring, since there will be extreme opposition from Germany for any more aid."

China is watching nervously, increasingly worried about the large chunk of its $2.4 trillion (£1.6 trillion) of foreign reserves held in eurozone bonds.

"Greece is only one case, but it's only a tip of the iceberg," said Zhu Min, the vice-governor of China's central bank. "The main concern today obviously is Spain and Italy."

Zhu Min said it is unlikely that Greece will default, but real concern is the deeper structural problem with the way the euro is run. "We don't see decisive action that tells the market, 'We can solve it, we can close it,' so the market is very volatile," he said. Beijing has repeatedly questioned the safety of dollar assets. This is the first time it has questioned the euro in such terms.

"China is really the big story of the day for Europe," said Simon Derrick, currency chief at the Bank of New York Mellon. "Nobody at China's central bank gives a speech like this without clearance from the highest level. They are saying, 'We have a lot of money invested in your debt and we think it is time for you to get your house in order'," he said.

“It was a complex situation,” Trichet told reporters in Brussels late yesterday. “I am extraordinarily happy that the governments of the euro area found out a workable solution.” Earlier, he said that an IMF role in the funding of a rescue framework for Greece would be “very, very bad.”

I wonder if those comments from China were behind Trichet's change of attitude. Regardless, Europe's common currency woes have been exposed and while Greece can breathe a little easier, it's got to rein in public spending, and start thinking of a long-term plan to diversify its economy beyond tourism and shipping.

The announcement of aid came as Greece celebrated its Independence Day, scaled down amid the crisis. Below you can watch Greek Prime Minister George Papandreou, arriving at a summit in Europe, expressing thanks for the solidarity and support that Greece received during the financial crisis. I want to wish my fellow Greeks "Xpovia Polla!"