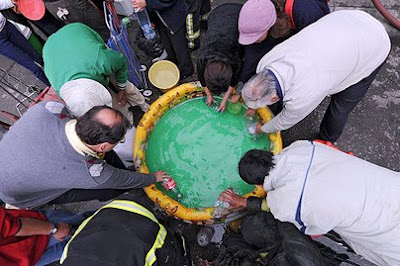 The chair of the Council of Canadians, a 70,000-member public advocacy group, says it's fundamentally wrong for our public educators to profit from owning essential public services.

The campaign led by Maude Barlow strikes at the heart of investment strategies at the Ontario Teachers' Pension Plan Board, which is the lead investor in companies controlling 37 per cent of Chile's water and sewage services.

"I'm steamed," the energetic volunteer declared afterward. Her colleague Meera Karunananthan was no happier after meeting later the same day with Jim Leech, president of the OTPP.

Both the umbrella group for teachers' unions and Leech argued it's the role of the pension managers, indeed their legal obligation, to pursue the best financial interests of pension plan members.

But Barlow predicts profit-driven ownership of water supplies, dams, roads, ports, airports, hospitals and schools will put the living standards of the poor and middle class in other countries at risk.

"In Chile and other places it's a matter of justice as water becomes privatized and the rates are set by the market. Those who cannot afford to pay those rates go without," she said in an interview.

Universal access to water, sanitation, health care and education is certainly vital, and some countries have messed up when turning public assets over to the highest bidder.

Meanwhile, pension plans put their members' savings at risk if they fail to factor in the risk of public backlash, or natural disasters like the severe earthquake that struck Saturday near Chile's coast.

Deborah Allan, a spokeswoman for Teachers', said Monday that no Chilean employees died in the earthquake, but the water system was damaged.

Recovery efforts are being hindered by the lack of electricity and the potential cost of repairs is not known. Teachers' Plan employees met to discuss what help they might provide as individuals.

Beyond the earthquake, there is always the risk a change in government could lead to nationalization of private assets. Look no farther than the former Brazilian Traction, Light and Power, once the largest Canadian investment overseas.

It used to supply 60 per cent of Brazil's total power and 75 per cent of its telephones, while carrying 1.1 billion passengers a year on its electric trams and buses.

But the government insisted on buying the telephone business in 1969 and power operations in 1979. It's hard to get full value when there's only one buyer.

That said, countries around the world are recognizing there can be advantages to private ownership. This presents an opportunity to both major public pension plans, and the countries seeking alternative sources of capital.

What's critical is to have both the local government and the foreign investor act in the public interest. Failure to do so can lead to public unrest.

He pointed out in an earlier letter to Barlow that Chile's government holds a part interest in private water service companies.

Those companies raised access to sewage treatment from 30 per cent to 90 per cent in the decade ended 2008, and this resulted in a dramatic reduction in cases of hepatitis and typhoid fever, he wrote.

Chile sets water and sewage rates, and provides subsidies to 21 per cent of customers served by the companies Teachers' controls, Leech added. So the government ultimately controls the water resources, environmental standards and profit margins.

It's not necessarily a panacea to have water, road and electrical systems provided by government. Direct or indirect tax subsidies can lead to waste and long-term consequences for the environment.

For Barlow to succeed in her campaign, Ontario's government would have to pass legislation to block investments in regulated industries.

That would not be in our public interest, and it may not be in Chile's.

As I stated yesterday in my comment on OMERS' 2009 results, infrastructure investments are being privatized, allowing private equity funds and pension fund managers to profit from these deals as they purchase assets on the cheap from cash-strapped governments.

I will admit that infrastructure is an excellent long-term investment, providing stable cash flows, but it carries its own set of risks. A couple of them were discussed in this article: natural disaster and nationalization. And then there are reputation and legal risks - something which Teachers is dealing with now following the earthquake in Chile.

While private-public partnerships are the likely future of infrastructure, privatizing public assets isn't always for the common good. Inevitably, privatization will lead to rationing of public goods as fees rise to allow investors to reap the profits on their investments.

Finally, I want to thank the committee at the Concordia School of Public Affairs for organizing tonight's panel discussion on pension reform. I enjoyed the discussion, met interesting people, and even got to see Michel Nadeau again, the former president of CDP Capital. And surprisingly, I agreed with many (but not all) of his comments. Will come back with my thoughts on the panel discussion later this week.