On the Cusp of a Global Bond Hiccup? 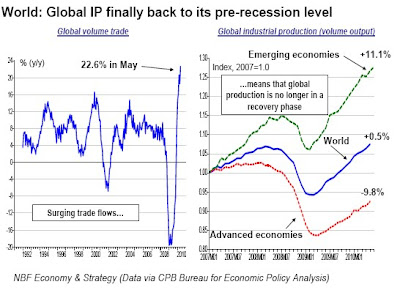 The Netherlands CPB Bureau of Economic Policy Analysis just released its world-trade monitor for the month of May:

Based on preliminary data, world trade volume increased by 1.8% in May from the previous month, following anupwardly revised decrease of 1.1% in April. Import volumes went up in the advanced economies as well as emerging Asia and emerging Europe, whereas Latin America and Africa / Middle East posted sizable declines. Import growth was extraordinarily high in Japan. Export volume increased in all major regions with the exception of emerging Europe. In May, world trade was 3% below the peak level reached in April 2008 and 23% above the trough reached in May 2009.
Monthly trade figures are volatile and focus on ‘momentum’ is therefore preferable. Momentum remains strongly positive. In the three months up to May, world trade was up by 5.0% from the preceding three months. Momentum was again highest in Latin America, while it declined somewhat in emerging Asia. Momentum of Euro Area exports went up for a third month in a row.

On the basis of preliminary data, world industrial production grew by an impressive 1.0% in May 2010, following a downwardly revised 0.7% increase in April. Production grew rapidly in all regions, with the exceptions of Japan and Latin America, where production was (nearly) flat. Growth was highest in the Euro Area and emerging Europe. In April, industrial production was finally back at the previous peak level reached in March 2008, which is 14% up from the March 2009 trough.

Yanick Desnoyers, Assistant Chief Economist at the National Bank of Canada commented on the trade report:

Global trade flows continue to surge. According to the Dutch Bureau for Economic Policy Analysis, the volume of world trade grew 1.8% in May, the eighth increase in nine months. World trade volume is now only 3% below its peak level reached early in 2008. As Today’s Hot Charts shows (see above), trade flows are currently expanding at a 23% annual clip on a year over year basis. On the flip side, this surge in trade flows pushed global industrial production virtually back to its pre-recession level. Despite the fact that IP is still down 9.8% in advanced countries, production is already up a whopping 11.1% in emerging markets since the pre-recession peak. After today’s data on trade flows, we can now say that industrial production, on a global basis, has left the stage of recovery and can now be qualified as being in an expansion mode. 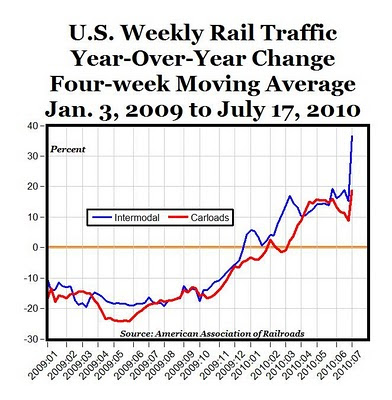 The Association of American Railroads released its weekly update today on rail traffic through last week, reporting that rail activity continues to show improvements compared to the same weeks last year. Highlights include:

MP: Overall, this was a fairly positive report, despite the AAR's headline "Weekly Rail Traffic Continues to Reflect Sluggish Economy." Compared to the same week last year, both carload and intermodal volumes were up, by 5.5% and 20.1% respectively. The graph above displays 4-week moving average growth rates for both series (to smooth out the weekly fluctuations), and shows ongoing weekly improvements in rail traffic compared to last year, especially for intermodal shipping. Intermodal traffic volume has registered year-to-year gains for 30 straight weeks, starting late last December; and the last 20 weeks have all been double-digit gains.

The evidence clearly indicates that fundamentals are much stronger than what is reflected in mainstream media. Global trade, global industrial production and US rail traffic are all reflecting an expanding global economy.

Finally, I had a nice lunch with Francois Soto of EMphase Finance today. Francois passed his CFA level II and was ecstatic, so I wanted to treat him to lunch to celebrate. He is only 27 years old, extremely bright and has tremendous potential. I enjoyed our discussion, felt his passion for finance and markets as we discussed several proprietary indicators he developed.

In fact, he just updated his "Rough Times" indicator shown below:

Basically the index needs to reach a level of 5 to trigger a US Recession. So far, the model reached 3 and two sub-indicators more are required. One of these is ISM Manufacturing below 50 while the other is proprietary. I am not saying a recession is impossible. It is quite possible but so far it would only point for a very short-lived recession. That's all we can infer for now.

Given the evidence presented above, I don't see rough times ahead. In fact, the stimulus might be working a lot better than we think, and if this is the case, global growth will surely surprise to the upside in the second half of the year. With global economic activity picking up steam, and global equity markets humming along, the only question I have is how long before we see a significant backup in global bond yields? More importantly, are pensions and other institutional investors prepared for a big bond hiccup? We'll find out soon enough.