Should You Sell Your Pension? 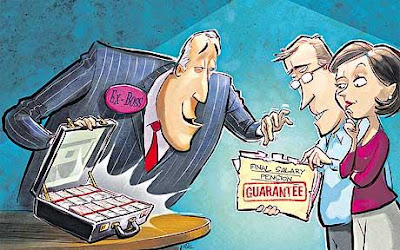 Emma Simon of the Telegraph asks, Should you sell your pension?:

In an unusual move, the Financial Services Authority and the Pensions Regulator have issued a joint statement cautioning trustees and advisers that in most cases such moves were unlikely to be in members' interests.

There are serious concerns that the inducements offered – be it cash in hand or an "enhanced pension transfer value" – are not adequate compensation for giving up valuable guaranteed pension benefits. Such offers are being made to employees who have previously contributed to a final salary pension scheme. These so-called gold-plated pensions guarantee an earnings-linked pension, rather than one that depends on the stock market and annuity rates.

Although many companies have now closed final salary schemes to new entrants, there are tens of thousands of people – often known as deferred members – who have built up rights within these schemes, even though they have later moved jobs and may now contribute to a different pension plan.

Increased longevity and a decade of poor investment returns mean many of the schemes are nursing large deficits. In a bid to reduce their deficits, some pension schemes are now offering "enhancements" to those who agree to move their pension elsewhere.

Laith Khalaf, a pensions expert at Hargreaves Lansdown, the advisory firm, said: "Pension savers should think twice before accepting any such deal. They should ask themselves why their former employer is making the offer: is it because it is good for them or is it good for the pension scheme? In most cases, it is going to be the latter, and people will be better off staying put."

To make matters worse, savers often don't have access to independent advice to help them evaluate these complex offers. "This joint statement has made it very clear that firms advising the pension scheme cannot also advise consumers, as there is a clear conflict of interest, and trustees have a responsibility to ensure their members get proper advice," Mr Khalaf added.

But many high street financial advisers are reluctant to advise on such issues. Param Basi of AWD Chase de Vere, another advisory company, said: "We back the Pension Regulator's stand of putting increased pressure on scheme trustees to ensure members' interests are protected. There should never be a scenario where an adviser is paid only if they recommend the member transfers away from the pension scheme, or is paid more for recommending a transfer. This leads to people getting the wrong advice."

He said his company was committed to providing impartial advice to scheme members on their options under any enhanced transfer value offer.

This is not a new problem. The Sunday Telegraph first highlighted the issue in November 2005, when it came to light that some companies were trying to persuade members to switch out of pension schemes by offering upfront tax-free cash payments. At the time consumer watchdogs complained that people were being given payments of hundreds of pounds to sign away pension benefits potentially worth thousands – and there were calls for the Pensions Regulator to investigate. So why has it taken so long to issue this guidance?

A spokesman for the Pensions Regulator, which regulates all occupational schemes, said: "We have had guidance on inducements since 2007." But it has now clearly beefed up its warning, particularly its advice that trustees should start with the presumption that enhanced transfers are unlikely to be in the members' interest.

However, there may be occasions when it would make sense to take up the offer, Mr Khalaf said. With any final salary pension there is always a nominal transfer value. This is the amount that would be needed today to buy an income equivalent to the pension rights you have already built up. With these offers the value is "enhanced" for those who agree to switch elsewhere. So if, for example, your normal transfer value is £100,000, the trustees might offer to pay £130,000 into a new defined contribution scheme.

This might strike many people as a good deal – but they should remember that they will be shouldering all the subsequent risk. Investment returns may mean that by retirement you have less than the transferred sum. And if annuity rates continue to decline you will need a significantly bigger pension fund to "buy" the same income in retirement.

Mr Khalaf added: "People need to look at the 'critical yield'." In other words, what return is needed on these investments to get the same pension in retirement that was guaranteed under the old scheme – remember that final salary schemes will increase benefits in line with inflation.

"If you need more than 6pc a year, or are only a few years from retirement, don't even consider switching – the risks are too high," he said.

But transfer values are typically based on buying an annuity that provides a spouse's pension. If you are single it may be worth a switch, as you can effectively convert benefits paid to married couples into a higher single annuity. Those with health problems could also benefit as they should be able to buy an "impaired life" annuity that pays a higher monthly income. As the transfer value offered will be based on current standard annuity rates, these people could potentially get a higher pension if they move.

Similarly, high earners worried about the future viability of their pension fund should get advice on switching. If a scheme's deficit caused it to go under, those on big salaries could find themselves getting far smaller pensions that expected, under the terms of the Pension Protection Fund (which bails out collapsed pension schemes). The key is to get individual advice.

Raj Mody, the chief actuary at PricewaterhouseCoopers, the accountancy firm, said: "The use of transfer deals is set to accelerate further. A recent PwC survey of 179 major employers showed that more than half planned to offer enhanced transfer values to deferred members, on top of the 8pc of respondents that already had. Likewise, a third of employers said they intended to offer retired pensioners the opportunity to give up future pension increases in return for a higher benefit now."

I caution pensioners and plan members to be very careful with these "enhanced transfers". Such deals are typically conjured up to cut costs and save the company from future pension liabilities. Of course, if there is a high likelihood the the company will go bankrupt, you might want to accept such a deal or risk seeing your pension payments get slashed.

It's quite disconcerting seeing how the pension war is being fought. Instead of bolstering pension plans to make sure members will enjoy a worry-free retirement, companies are looking at ways to cut costs, passing the responsibility onto individual members. Unfortunately, this isn't in members' best interests, and the social cost of all these cost-cutting measures will borne by taxpayers down the road.