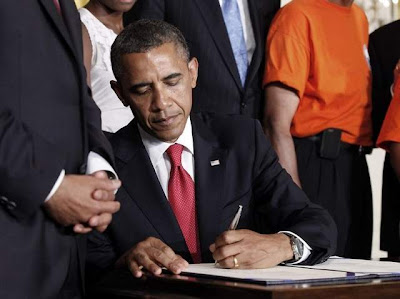 A new law will let companies contribute billions of dollars less to their workers' pension funds, raising concerns about weakening the plans that millions of Americans count on for retirement.

But with many companies already freezing or getting rid of pension plans, many critics are reluctant to force the issue.

Some expect the changes, passed by Congress last month and signed Friday by President Barack Obama, to have little impact on the nation's enormous $1.9 trillion in estimated pension fund assets. And it is more important, they suggest, to avoid giving employers a new reason to limit or jettison remaining pension benefits by forcing them to contribute more than they say they can manage.

The equation underscores a harsh reality for unions, consumer advocates and others who normally go to the mat for workers and retirees: When it comes to battling over pensions, the fragile economy of 2012 gives the business community a lot of leverage.

"That wouldn't do our members any good" if the government forces companies to make pension contributions they can't afford, said Karen Feldman, benefits policy specialist for the AFL-CIO, the giant labor federation that supported the legislation.

AARP lobbyist Debbie Chalfie said the seniors organization was concerned that companies contribute the right amount to their pension funds, but at the same time, "We want to make sure employers continue offering these plans."

Even the Pension Rights Center, which advocates for pensioners, was torn. Executive Vice President Karen Friedman said the group was "sympathetic to business concerns" that companies have been hurt by the recession, though still worried that reducing corporate pension contributions could hurt consumers.

The short-term contribution cuts worry University of Pennsylvania insurance professor Olivia S. Mitchell, who says the fact that Congress can change the formula "does not mean that pension funds will be able to defy the laws of economics and finance."

Nearly half of Americans say they are counting heavily on their pensions for retirement, according to an Associated Press-LifeGoesStrong.com poll conducted last October. Yet times are rough for pensions.

Only 15 percent of private sector workers participate in defined benefit plans, which guarantee company-paid monthly retirement payments, according to the Employee Benefit Research Institute. That 2008 figure was down from 38 percent in 1979.

During that same period, the number of workers in defined contribution plans, like 401(k) investments to which workers and companies contribute, has grown to 43 percent. These plans are considered less advantageous for employees because workers contribute much of the money and bear the investment risk.

Nothing really new here. Democrats and Republicans are all the same. They talk as if they come from different planets but when you look at what they are signing into legislation, it's basically more corporate handouts and less for the common worker.

Let me remind everyone that it was the Clinton administration that repealed Glass-Steagall, arguably the biggest public policy blunder of our generation. Sure, banksters love it, but the damage it has done to the financial and economic landscape is profound. The latest debacle at J.P. Morgan highlights the need to re-introduce Glass-Steagall.

And now President Obama has signed a law allowing companies to contribute billions of dollars less to their workers' pension funds, pretty much ensuring the inexorable trend toward pension poverty for millions of Americans.

In January 2009, I asked whether the pension crisis will define President Obama's legacy. I just got my answer. Well done, President Obama, you just pulled a Mitt Romney on the millions who voted for you.

Below, Elizabeth Warren, candidate for US Senate, was the featured and most spirited speaker at the Grand Opening of the Sandwich Democratic Campaign Office on Cape Cod, Massachusetts. If Americans want change they can truly believe in, they need to vote for more people like her. She's part of the few who actually get it.