Ontario Sticks it to the Feds! 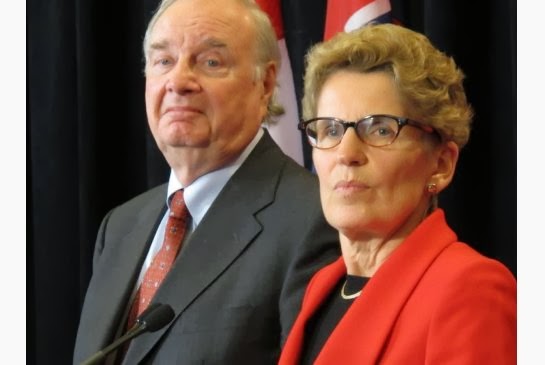 
Premier Kathleen Wynne has recruited former Liberal prime minister Paul Martin to help with a “made-in-Ontario” pension plan, a clear signal the province will proceed with its own program for retirees.

But enlisting Martin — who was instrumental in saving an underfunded Canada Pension Plan a generation ago — immediately earned Wynne the enmity of Prime Minister Stephen Harper’s Conservatives.

“Employees simply can’t afford a smaller paycheque in this fragile global economy. The Liberal government of Paul Martin slashed transfers to Ontario at record levels, unlike our government that is increasing support to Ontario.”

But Wynne emphasized an Ontario pension plan, which will be a cornerstone of her Liberal campaign platform in an expected spring election, is about ensuring people save enough money to “allow them to have a dignified retirement.”

“To frame this as a taxation issue when it is an investment in the future . . . misrepresents the issue,” the premier said.

“We are both profoundly disappointed by the reticence of the Harper government to improve the CPP, but . . . as the federal government steps back, it’s our responsibility at the province to step forward.” she said.

As prime minister Jean Chrétien’s treasurer in the 1990s, Martin worked with the provinces to ensure Canadians were contributing enough to CPP to keep it viable.

“CPP premiums are premiums. They’re an investment in the future, they are not a tax,” he said, emphasizing it shouldn’t be a partisan debate.

Martin, who will work as an unpaid adviser to Finance Minister Charles Sousa, noted when the federal Liberals revamped the pension plan in 1997, Progressive Conservative treasurers Ernie Eves of Ontario and Jim Dinning of Alberta were key players.

“That is the kind of precedent that I think one would all intend to look for,” he said, adding such co-operation was crucial to salvaging CPP.

“We worked out the plan that saved the Canada Pension Plan, which makes it today one of the most actuarially sound in the world,” said the man widely viewed as Canada’s most successful federal finance minister.

“But it does have a problem. It has the problem that the premier has outlined and that is for middle-income Canadians, as you project ahead, the Canada Pension Plan is not going to be able to do that which it must,” said Martin, prime minister from 2003 until Harper defeated him in 2006.

Because CPP benefits max out at $12,000 a year, there is a need to force people to save more for their retirement years.

Harper and federal Finance Minister Jim Flaherty have spurned Wynne’s call for enhancing the national plan over concerns the requisite increases to employee and employer payroll taxes would damage the economy.

However, Martin said because government projections suggest employment insurance premiums could “drop” in years ahead, an Ontario pension plan doesn’t necessarily have to adversely impact paycheques.

“You can do this without affecting people’s take-home pay to any extent.”

“People who are worried about their retirement have heard a lot of talk from the Liberal government for 10 years, but haven’t seen any results.”

Martin and Wynne are politically close — his former chief of staff, Tim Murphy, is her campaign co-chair and his top adviser, David Herle, is managing her campaign.

“She is surrounded by, in my opinion, simply the best team that she could have,” he said. “I have huge confidence and the great advantage that they have is that they have the premier as their candidate.”

Here is my message to the federal junior finance minister Kevin Sorenson: "Eat shit!" The Harper Conservatives are on their way out and not a moment too soon.  They are a national embarrassment, shamelessly pandering to the financial services industry. It's about time Canadians wake the fuck up and smell the coffee.

I apologize for my profanity but this charade on enhancing the CPP has gone on long enough. I keep reading articles from financial services industry hacks telling us how PRPPs will close the Canadian pension gap but as I've stated plenty of times, the only surefire way to cure pension envy is to enhance the CPP and bolster the retirement system for all Canadians. Everything else, especially a private sector solution like PRPPs, is simply unacceptable and will veer Canada off the right path.

It's very simple folks. Increase CPP contributions, have the money managed by CPPIB or better yet, several well-governed public pension funds, and you will finally bolster Canada's retirement system in a meaningful way and propel us to the world's best pension spot.

And what do I think of Premier Kathleen Wynne recruiting former Liberal prime minister Paul Martin to help with this new pension plan? Great news. I hold Paul Martin in high regard and think he was one of the best finance ministers and prime ministers our country ever had. I didn't like the way his government treated Bernard Dussault, Canada's former Chief Actuary, but that is another story (the Liberals can be a lot dirtier than the Conservatives when they don't get their way).

The last time I saw Paul Martin was many years ago at Molivos, one of my favorite Greek restaurants in Montreal and one of his favorites too (Henri-Paul Rousseau also enjoyed it but that was before the scandal that rocked the Caisse). Prime Minister Martin was charming as ever, greeted me and asked me how my stepfather and mom are doing. He's a classy guy and extremely sharp (it's too bad Chretien screwed him over).

I end by inviting Paul Martin, Premier Wynne and Ontario's Minister of Finance, Charles Sousa, out to lunch. I will be in Toronto in late February to attend a conference the Healthcare of Ontario Pension Plan and others are sponsoring to discuss the impact of defined-benefit pension plans. Jim Keohane, HOOPP's CEO, will give remarks on presentations by James Tucker of and Michael Block of the Boston Consulting Group and David Herle of the Gandalf Group.

The event takes place on February 24th from 3:00 to 4:30 p.m. at the MaRS Auditorium, 101 College Street, Toronto. If you're interested in attending, contact Martin Biefer, HOOPP's Director of Public Affairs, by February 14th and see if there is any space available because it might be by invitation only (Martin's email is mbiefer@hoopp.com).

Below, watch to the press conference with Premier Kathleen Wynne and former Liberal prime minister Paul Martin. Ontario's new plan is raising questions but I'm glad they are taking the lead on retirement security and hope other provinces will join in and stick it to the feds!