While the results trailed the 14 percent average increase of Canadian pension funds as estimated in a January report by RBC Investor Services, they beat the fund’s own benchmark of 12.6 percent last year. Over four years, the Caisse said its weighted average annual return was 10 percent -- topping the 8.8 percent return of its benchmark.

“We’re exactly where we want to be,” Chief Executive Officer Michael Sabia said today at a press conference in Montreal. “La Caisse is solid, and our investment strategy is working.”

Inflation-sensitive investments returned 13 percent, driven by a 15 percent gain for the C$22.6 billion real-estate holdings. The return for the Caisse’s C$69.2 billion fixed-income assets was nil.

The Caisse oversees pensions for retirees in the French-speaking province of Quebec, with a dual mandate to maximize returns and foster economic growth in the province. With net assets of C$201.5 billion as of Dec. 31, Canada Pension Plan Investment Board is the country’s largest manager of public pension funds.

Ivanhoe Cambridge, the Caisse’s real-estate unit, is selling most of its C$1.8 billion collection of hotels, CEO Daniel Fournier said. Ivanhoe Cambridge has sold about 45 percent of its hotel assets in the past three years, and a pending transaction that could be completed in the next few weeks will take that proportion to 67 percent, Fournier said. He declined to identify the hotels or the buyer.

Proceeds from the sale of hotels will be reinvested in the purchase of office buildings, residential properties and shopping centers, Fournier said.

After acquiring a minority stake in the Port of Brisbane last year, the Caisse wants to add to its C$8 billion portfolio of infrastructure assets in the next few years, Sabia said. Infrastructure -- a category that also includes airports and gas-distribution networks -- returned 11 percent for the Caisse in 2013.

Sabia was careful not to criticize a plan by the Quebec government to keep head-office jobs in the province. Quebec Finance Minister Nicolas Marceau said Feb. 20 he would propose amendments to the province’s Business Corporations Act that would give public companies based in the province “adequate means of defense” against unsolicited bids.

Recommendations contained in a government-commissioned report on head offices are “like a toolbox,” Sabia said. “It’s are full of ideas, but you need to be selective. There’s always the risk that you could go too far. Some elements from the report have the potential to be part of a good solution.”

Rona’s new management team is “doing what’s necessary to re-establish the strength of this company,” Sabia said. “The Caisse is a long-term investor, and we are there to accompany their turnaround. We are convinced of Rona’s potential.”


The Caisse de depot et placement du Quebec had another strong year in 2013, led by growth in the value of its U.S. equities that helped generate a 13.1 per cent annual return on investments.

Quebec's largest pension fund manager said it beat its benchmark portfolio, which grew by 12.6 per cent, and the value of its assets rose to $200.1 billion from $176 billion in 2012.

The Caisse said stronger equity markets in the United States were the largest engine for growth last year, rising by 22.9 per cent. The $18.2 billion gain included $3.4 billion from its private equity portfolio.

Inflation-sensitive investments such as real estate and infrastructure grew by 12.5 per cent or $3.4 billion.

Fixed income investments generated a zero return because of a rise in interest rates.

At year-end, the Caisse's assets included $93.8 billion in equities, $69.2 billion in fixed income, and $31.8 billion in inflation-sensitive investments.

The Caisse's eight largest clients, which each had different return targets and risk tolerance, had returns ranging between 8.9 and 15.5 per cent.

Over four years, the weighted average return was 10 per cent as assets increased by $68.5 billion.

"With a 10 per cent annualized return over four years, we have exceeded our clients' long-term targets," said Caisse CEO Michael Sabia, who insisted the fund manager's strategy is working.

"In an economic environment characterized by major adjustments in emerging markets, a lengthy recession in Europe and the beginnings of a recovery in the United States, we have stayed focused on our strategy and continued to invest in quality assets anchored in the real economy."

In addition to increasing investments in Quebec, the Caisse said it is focused on supporting the development of entrepreneurship in the province that will drive future growth.

"In 2013, we were especially active with small and medium-sized businesses and we enhanced what we can offer to the manufacturing and mining sectors, two key drivers of the economy."

Its real estate subsidiary, Ivanhoe Cambridge, spent $5.2 billion on acquisitions last year by strengthening its presence in large U.S. cities, repositioning its European portfolio and increasing its investments in Montreal and Quebec City.

The Caisse's 2013 annual report isn't available yet (it will be in April) but you can read the press release here. You can also click here to gain more insights on their specialized portfolios.

The overall results were decent but below average. The 13% gain in 2013 trailed the 14% average increase of Canadian pension funds as estimated in a January report by RBC Investor Services, but they beat the fund’s own benchmark of 12.6% last year. Over four years, the Caisse said its weighted average annual return was 10% -- topping the 8.8% return of its benchmark, which is an added value of 120 basis points or 1.2% (not bad over a four yer period but hardly spectacular).

The Caisse's 2013 results, however, were much better than OMERS which returned a paltry 6.5% in 2013 (will cover their results tomorrow).

You can click on the image below to get a snapshot of the one and four year results of the Caisse's specialized portfolios: 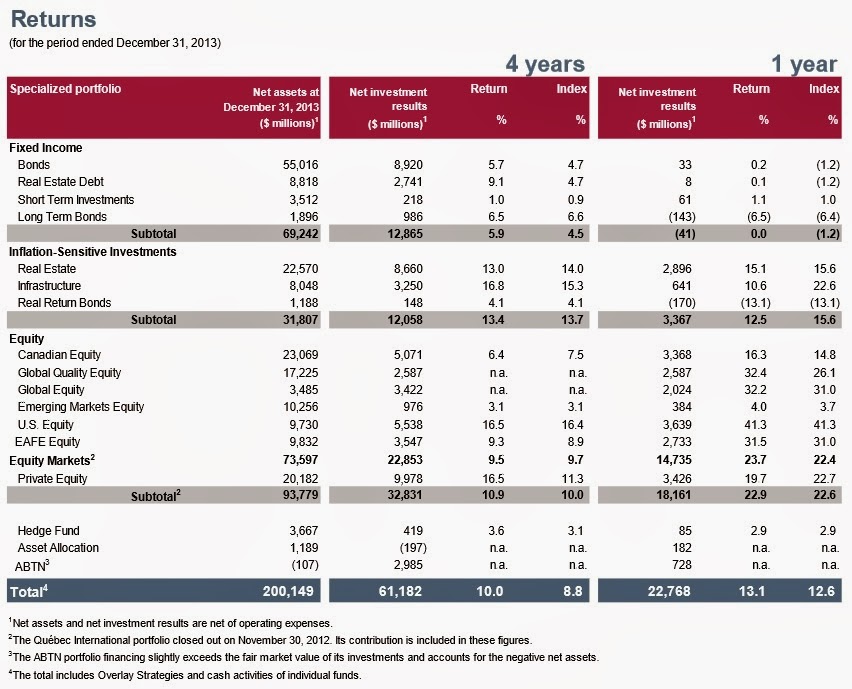 Every pension fund should report results this way and include the benchmarks of each of their specialized portfolios. This way we can gauge who is delivering real added value, not just leveraged beta which what you often see in public, private and hedge fund investments.

Here are some of my observations on the Caisse's 2013 results. Take the time to read them because you won't find this in-depth coverage anywhere else:
On that cheery note, I leave the senior managers at the Caisse to ponder all my points very carefully. I don't mince my words and I don't give a rat's ass what people think of me.

I will circle back to the Caisse's 2013 results once their annual report is made public in April. I am curious to see how much money they lost in currencies and will take a closer look at other investments.

You can click here to watch a report on the Caisse's results. Below,  Michael Sabia, Chief Executive Officer of the Caisse de dépôt et placement du Québec and Campus Montréal Co-Chair, discusses the importance of diversity on campus.