How Safe is Your Pension? 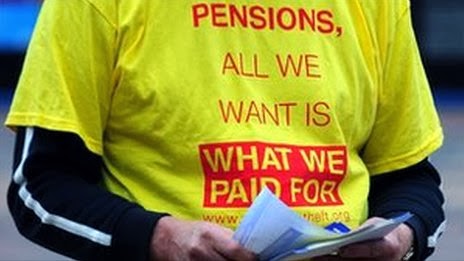 Pat Kerwin wrote an article for rabble.ca, How safe is your pension?:


Many retirees have found out that the pension they earned over decades of contributions to plans turned out to be less secure than they had assumed. In cases of bankruptcy such as Nortel, this has been a harsh reality for some seniors.

Those who had participated in defined contribution plans found their dreams undermined when the stock market tanked in 2008. Even those in large pension plans such as the Ontario Teachers Pension Plan and Ontario Municipal Employees Retirement System (OMERS) have been faced not only with increased contribution rates but also stories of huge shortfalls in the pension fund. The stories on "shortfalls" usually include dire warnings of the need to cut benefits by a variety of means, including a later age for retirement and the elimination of cost-of-living protection.

Bill Harford, a retired CUPE member and President of the Municipal Retirees of Ontario Organization, receives a pension from OMERS. Here is Bill's take on the dire warnings that pop up in the media:


From my perspective, my OMERS pension is doing just fine. OMERS is no more in trouble than you or I would be if we had to pay off all our debts this minute. In simple terms, if the OMERS pension had to pay out the total pension in a wind-up today, it would be in trouble. Why? Because it is approximately $9 billion short of what is needed to pay out the pension. But so would each one of us be in big trouble if suddenly we found that the new car we bought or the loan we have had to be paid off tomorrow, but this is not what OMERS anticipates.

OMER's like many other pensions was hard hit by the 2008 market collapse. Fortunately OMERS had taken steps to change its portfolio mix, moving more investments from public to private investments. However, despite these changes the crash of 2008 caused tremendous losses to the pension plan of some $6 billion. This has since grown as an actuarial deficit of approximately $9 billion. OMERS has not turned a blind eye to its deficit but has taken action to change its deficit into a surplus. Despite good returns from investments in the diversified portfolios, the deficit reduction has not been as fast as some stakeholders would like. This unfortunately has resulted in an increase to contributions paid by the active OMERS workers and their employers. Some employers have proposed more drastic changes which the board has rejected.

The Board has taken a look at all of its options to ensure the OMERS plan remains solid. No further changes are being made but this does not mean they cannot happen in the future. There has to be a strategy should there be a significant drop in the OMERS plan investments. Until that happens there will be no change to OMERS benefits to the current retirees or the future retirees. As an OMERS retiree, I am not concerned about my pension but it does not mean everything is set in stone.

Retirees need to be involved like Bill is to ensure that their pensions are protected. Retirees need to do this in co-operation with active members as solidarity does not end with retirement.

Retiree Matters is a monthly column written by members of the Congress of Union Retirees of Canada (CURC) that explores issues relevant to retirees, senior citizens, their families and their communities. CURC acts as an advocacy organization to ensure that the concerns of union retirees and senior citizens are heard throughout Canada.

I read articles like this and it reinforces my point that we need to enhance the Canada Pension Plan for all Canadians. Nortel was a scam! Millions of Canadians lost a ton of dough investing in that hyped up tech company (including yours truly!) and they tried to screw their pensioners and did screw their disabled employees. Till this day, my dad mumbles: "The stock market is a scam. John Roth, Frank Dunn and all those Nortel crooks made off like bandits and investors lost millions."

While the state of many Canadian and U.S. pension plans dramatically improved over the last year, mostly due to soaring stock markets and higher interest rates, Warren Buffett is right, the worst is yet to come for pensions. When deflation eventually sets in, it will get ugly out there and many pensions praying for an alternatives miracle are going to get slaughtered once more.

But all is not lost in PensionLand. I still believe in the benefits of defined-benefit pensions but I also wrote an article for the New York Times urging that U.S. policymakers revamp the governance at U.S. public pension plans by introducing independent qualified investment boards.

And Bill Harford is right not to be concerned about OMERS' deficit. I slammed OMERS hard last week for their terrible 2013 results but I'm not concerned at all about their pension deficit. I think the media loves blowing these pension deficits way out of proportion. Ontario Teachers', for example, is almost fully funded and I suspect they will be overfunded when their results come out. HOOPP is in the best position of any pension plan, it's overfunded and doesn't need to take as much risk to make its actuarial bogey (it still managed to deliver 209 basis points of active return, which is amazing).

One thing I will caution Bill Harford and other members of OMERS, however, is not to buy that crap that the "shift into private markets" will insulate and bolster OMERS' portfolio. It smooths returns but it also introduces important liquidity risk into the overall asset mix. Importantly, private market investments are no panacea, and anyone that tells you so is an ignorant and dangerous fool!

Below, Jennifer Schonberger, editor for Fox Business News, talks to Lawrence McDonald of Newedge about pensions increasing risk through "risk-parity" strategies. Read my comment from last year on the dangers of fighting the last investment war. A lot of experts warning of a blowup in bonds don't understand risk parity and more importantly, don't understand why deflation will hold bond yields down or in a tight range for many more years.