An Agreement on Expanding the CPP? 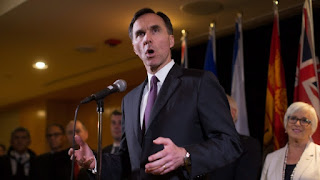 
Most of Canada's finance ministers reached an agreement in principle Monday to revamp the Canada Pension Plan, although Quebec and Manitoba have not signed on to the deal.

Once the plan is fully implemented, the maximum annual benefits will increase by about one-third to $17,478.

Finance Minister Bill Morneau said the deal will improve the CPP in a way that will make a difference to working Canadians.

Morneau said Quebec, which has its own pension plan, and Manitoba continue to be part of the process, despite not signing on to the agreement.

"Quebec is in a different situation," he added. "The Quebec pension plan is a different vehicle. The costs are different than the Canadian Pension Plan. The idea that more analysis is required is something that we completely understood around the table."

For Manitoba, Morneau said the deal comes too soon for the province's new Tory government.

"Manitoba is a brand-new government. They've been in power for four weeks, so they were a productive voice around the table, a voice of continued interest in working together, but of course this comes pretty fast and hard for them."

"Today, this federal government has shown great leadership and great desire to do something of great benefit for our young people."

Sousa said the plan would replace the one his government had been working on.

British Columbia Finance Minister Mike de Jong, who had reservations about expanding the CPP, said he came on board because the plan is affordable for employees.

"I think we have reached a balanced approach to setting the objectives that were set out."

A change to the CPP needs the consent of Ottawa and a minimum of seven provinces representing at least two-thirds of the country's population.

Heading into Monday's federal-provincial meeting, it was still unclear whether Ottawa would piece together the minimum required provincial support for change. Saskatchewan, for example, did not support CPP enhancement.

Sources say Ottawa made a major 11th-hour push in hope of securing enough countrywide support to boost the CPP and suggest Prime Minister Justin Trudeau was involved in the extra effort.

There hasn't been such a level of consensus on CPP reform at a national scale since the 1990s.

Morneau has argued that enhancing the CPP is critical to ensuring future generations will be able to retire in dignity, no matter the state of their finances.

However, critics have warned that expanding the CPP would squeeze workers and employers for additional contributions — and hurt the still-fragile Canadian economy.

The federal government intensified its lobbying efforts over the final days and hours of meetings in Vancouver as it tried to attract support from enough provinces to ensure a CPP upgrade, said sources with knowledge of the talks.

This is great news for future generations of Canadians. Read my last comment on chasing a CPP consensus to get my thoughts on why it's critically important to enhance the CPP once and for all.

Bernard Dussault, Canada's former Chief Actuary, was kind enough to share his thoughts with me:
Bernard also pointed out a few things which should be obvious:
I thank Bernard for sharing his insights. Below, CBC News reports on how most of Canada's finance ministers reached an agreement in principle Monday to revamp the Canada Pension Plan.