To Brexit Or Not To Brexit? 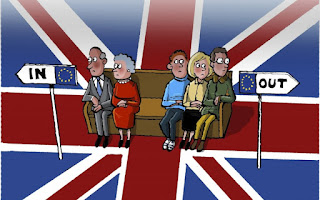 
Investors hoovered up euro zone bonds on Wednesday, daring to look beyond Britain's EU vote to a world in which the U.S. Federal Reserve is in no rush to raise interest rates and the ECB stands ready to do more to nurture weak growth.

The recent rise in safe haven German bond yields -- which has come as investors discount the prospect of a vote for Brexit -- ground to a halt and low-rated debt was also in demand after interventions from the world's two most powerful central banks.

European Central Bank chief Mario Draghi renewed his pledge to use all instruments to tackle weak growth in the bloc, before U.S. Fed chair Janet Yellen put the kibosh on a July rate hike as she bemoaned slowing momentum in the US labour market.

"It took ECB President Draghi's statements, which were interpreted as being dovish, to usher in a bullish counter-movement on EMU (euro zone) government bonds," DZ Bank strategist Daniel Lenz said.

German 10-year bond yields were down slightly on the day at 0.05 percent, but still some 9 basis points above record lows hit last Thursday before the murder of pro-EU lawmaker started to shift momentum back towards a remain vote.

All other euro zone bond yields, including those in southern Europe which have been most vulnerable to worries around Brexit, were lower on the day.

Some analysts said the last day of campaigning before Thursday's Brexit vote could still change perceptions for what polls show will be a knife-edge vote.

But bookmakers' odds, which are more closely followed by those in financial markets, show just a 25 percent chance of a leave vote, down from around 40 percent last week.

Easing nerves around Brexit and the prospect of further monetary easing have also seen investors return to low-rated peripheral bonds, which were shunned last week in echoes of the euro zone debt crisis.

Societe Generale strategist Ciaran O'Hagan said that bond yields in Spain and Italy show there is "no worry at all ahead of a possible Brexit surprise".

Nowhere is the turnaround in sentiment towards Europe's riskier assets more evident than in Greece.

Yields on two-year Greek government bonds -- the lowest-rated in the bloc -- rose 200 bps last week and have fallen 125 bps so far this week.

And there is a strong chance they could fall further before Thursday's vote.

The ECB, at a governing council meeting on Wednesday, is expected to reinstate Greek banks' access to its cheap funding operations.

This would be a reward for painful economic reforms carried out by Alexis Tsipras' government and allow Greece's banks to come off expensive emergency borrowing. Greek banks lost their access to the ECB's cheap funding mechanism early last year when Athens came to the brink of being ejected from the euro zone.

The only good thing about the Brexit vote is it will be over this week and we can all go back to our lives and stop worrying about it.

I have publicly stated Canadian pensions shouldn't worry about Brexit and in my comment on global bonds in the Twilight Zone last week, I stated the following:


[...] I'm not convinced Brexit is a done deal. The Brits aren't stupid and when it comes down to it, they will vote with their wallets, just like Quebecers voted with their wallets in past referendums. At the end of the day, everyone thinks about their economic well-being. Period. I couldn't care less about polls when it comes down to voting day, I think Brits will stay the course.

However, Brexit is just one hurdle for the global economy. There are plenty of others and unless policymakers figure out a way to stimulate and sustain aggregate demand, deflation will rule the day and global bond yields will stay ultra low for a very long time.

But let's say Brexit happens, then what? Well, investors will seek refuge in good old US bonds, they're going to sell the euro and pound and buy the yen. Markets will be in a tizzy and volatility will shoot up. Conversely, if Brexit doesn't happen, the euro and pound will rally, the yen and US bonds will sell off and global stocks and corporate bonds will take off.

Of course, if you ask Mr. Yen, the yen will strengthen past 100 per dollar this year, whichever way the UK votes in Thursday’s referendum. I hope he's wrong as the surging yen could trigger a crisis, especially another Asian financial crisis.

One thing is for sure,  David Cameron, the British prime minister, has no one to blame but himself for this vote. What else? The favorable opinion of the EU is plunging everywhere, especially in France.

In fact, regardless of the outcome in this week's referendum, Brussels has a huge problem, one that I see getting worse as the euro zone struggles to escape deflation.

Below, on Tuesday, speaking in front of No. 10 Downing Street, Prime Minister David Cameron of Britain made an appeal to older Britons to vote to stay in the European Union.

Also, millions watched the BBC debate where Boris Johnson, Ruth Davidson and Sadiq Khan locked horns. You can watch the entire debate below but there are clips of the heated exchange available here.

I'll end with some humor. Last Week Tonight With John Oliver discusses what Brexit means. And Scottish comedian Billy Connolly 's colonoscopy skit. I did my first one yesterday and I'm glad it's over and that everything is fine. Don't worry about Brexit, it will be over really soon and we can all breathe a little easier until the next crisis erupts.