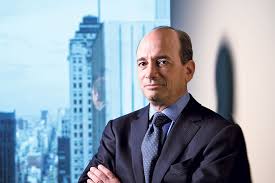 
Gotham Asset Management, the $6 billion money manager run by Joel Greenblatt and Robert Goldstein, is exploring a new fee structure that ties more of the fund’s pay to performance.

The firm is in talks with some investors for its Gotham Neutral Strategies hedge fund about charging one fee: the greater of a 1 percent management fee or 30 percent of returns that exceed the fund’s benchmark, according to two people familiar with the matter. The equity fund currently charges 1.5 percent of assets in management fees and 20 percent of profits, one of the people said.

Hedge funds have been trimming and altering their fees amid a backlash over lackluster returns and criticism that the standard model of charging a 2 percent management fee and a 20 percent incentive fee is too expensive. Most hedge funds charge investors too much for the performance they deliver, Greenblatt, who is Gotham’s co-chief investment officer, told Bloomberg Television in a May 2014 interview.

The Gotham Neutral Strategies fund gained 7.5 percent last year, according to another person familiar with the matter. The HFRI Market Neutral Index was up about 2 percent in that time. Since inception in July 2009, the fund has gained an annualized 7 percent.

If the new fee structure is adopted, Gotham would join Hong Kong-based hedge fund Myriad Asset Management and others in moving to the 1-or-30 model, which has been championed by investors including the Teacher Retirement System of Texas.

As of mid-February, at least 16 multi-billion-dollar hedge funds worldwide are either in the process of implementing or have implemented the 1-or-30 fee structure that was introduced to the industry in the fourth quarter of 2016, Jonathan Koerner of Albourne Partners said in a telephone interview on Feb. 16. 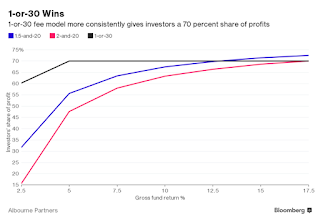 “The objective of ‘1 or 30’ is to more consistently ensure that the investor retains 70 percent of alpha generated for its investment in a hedge fund,” Koerner wrote in a white paper published in December by Albourne, which advises clients on more than $400 billion of alternative investments globally. The management fees charged in a year when the fund underperforms the benchmarks are deducted from the following year’s performance fee payment, making it, in effect, a prepaid performance fee credit, he said last month.

The Gotham Penguin Fund, which wagers on and against U.S. stocks, gained 25 percent last year, according to one of the people familiar with the matter, compared with a 5.4 percent rise in the HFRI Equity Hedge Index. Since inception in 2013, the fund has returned an annualized 15 percent.

So what is this all about? Basically, Joel Greenblatt of Gotham is right, most hedge funds charge investors too much for the performance they deliver, and he is proposing something to better align interests with his investors.

In the past, it was always underperfoming hedge funds what would propose lower fees to investors. But here we have a well-known, highly respected hedge fund manager who has performed well over the years stating the gig is up and he's proposing something better to his investors.

Unfortunately, I'm not sure this wonderful "1 OR 30" fee structure is going to gain traction, no matter how much sway Albourne has.

I had an exchange with Dimitri Douaire, formerly of OPTrust, on this topic on LinkedIn (click on image below); 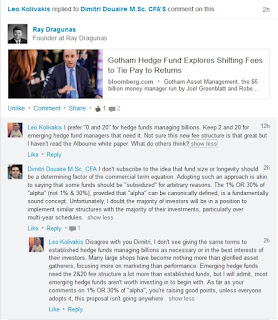 Now, I might disagree with Dimitri on whether or not giving better terms to emerging hedge funds is a "subsidy" or whether multi-billion-dollar hedge funds should charge any management fee at all, but he's right, unless the majority of investors start implementing this fee structure across all their investments, it's not going to gain traction.

You can read more on Albourne's "1 or 30" fee structure here. In theory, it makes perfect sense, we just have to wait a decade to see if it gains any traction.

Below, an older (2011) Fortune interview where Joel Greenblatt talks about how to beat the market (see transcript here). Listen carefully to his comments, very interesting, and remember, I track Gotham's portfolio every quarter along with those of other legendary investors when I go over top funds' activity.

Last year, Greenblatt also talked with Morningstar about choosing active managers. You can watch that interview here and read the transcript as well. It's excellent and well worth listening to.

Lastly, it isn’t often that a very successful hedge fund manager with a winning strategy closes up shop, but that is exactly what Joel Greenblatt did in 1995. It’s equally unusual to get back in the business more than a decade later with a dramatically altered strategy. Greenblatt appeared on WealthTrack in 2014 to discuss his big change in portfolio strategy, from a very concentrated approach to broad diversification. Watch this interview below.