Beyond the Fed's Pivot 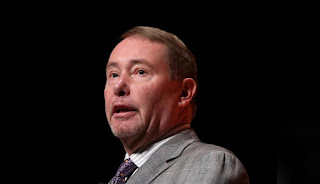 Jeffrey Gundlach, chief executive of DoubleLine Capital and the most widely followed bond investor, said the Federal Reserve’s dovish turn in its policy statement on Wednesday took its lead from the bond market:


The Fed is doing “what the bond market says - with a lag,” said Gundlach, who oversees more than $130 billion in assets. “The bond market definitely helped to encourage the ‘Fed pivot.’”

The Fed on Wednesday signaled it could cut interest rates by as much as half a percentage point over the remainder of this year, as it responded to increased economic uncertainty and a drop in expected inflation. The U.S. central bank’s next policy meeting will be held in July, with the following meeting in September.

In a telephone interview with Reuters, Gundlach said economic data would have to be weak for the Fed to slash rates in July. If policymakers do cut rates next month, “They are basically admitting they are behind the curve,” he said.

“The only way they cut is if the data is sustaining a negative tone and that we have sustained economic weakness,” Gundlach said.

“One interest rate cut is not going to forestall recession,” he added. “It increases the chances that we are headed into recession.”

In an interview on Fox Business on Wednesday, Gundlach also said Trump’s re-election chances depend almost entirely on the economy. And just last week, he predicted a 40% to 50% chance of a US recession within the next six months, and a 65% chance of a recession in the next 12 months.

Gundlach is also joining dollar bears, calling it a moment of truth for the US dollar:


Moment of truth for DXY. Closed today right on top of 9 month uptrend and just above 200-day MA. And gold broke out above it’s huge base.
— Jeffrey Gundlach (@TruthGundlach) June 20, 2019


With all due respect to the 'bond king' (PIMCO is quietly outperforming Gundlach's fund), the US dollar ETF (UUP) is just pulling back here and the rest of the world is still swamped in negative-yielding debt, so it's hard to get too negative on the greenback here: 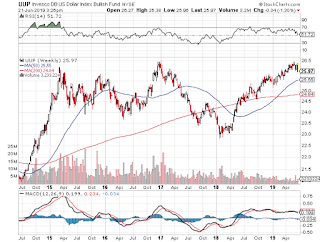 Sure, the US economy is slowing and this is worrying investors. IHS Markit said its flash manufacturing purchasing managers index dropped to 50.1 in June from 50.5 in May, the worst reading since September 2009.

More worrisome, the flash services purchasing managers index in June fell to 50.7 from 50.9, the worst reading since March 2016, signaling that weakness in manufacturing is spreading to services:


Flash @IHSMarkit composite PMI for the US fell from 50.9 in May to 50.6 in June, rounds off a second quarter in which the PMI survey data point to the pace of economic expansion slipping to 1.4%. pic.twitter.com/lVGxNY7Dib
— Chris Williamson (@WilliamsonChris) June 21, 2019

Still, a reading above 50 indicates expansion and relative to the rest of the world, the US economy is doing well:


Today's flash manufacturing #PMI surveys for the US, Japan and Eurozone from @IHSMarkit indicate that the weakening trend in global production intensified in June. Read more in our free-to-read commentary at https://t.co/DRYqOkiDbN pic.twitter.com/IO37teZitm
— Chris Williamson (@WilliamsonChris) June 21, 2019

This is why I have a hard time understanding why investors are so bearish on the US dollar.

Now, as far as the Fed's pivot, the market is pricing in a rate cut by September but Wall Street strategists are skeptical the Fed will cut interest rates this summer, and I don't blame them.

Have a look at the year-to-date performance of the major S&P 500 sectors: 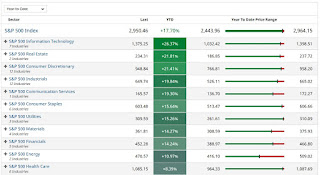 The S&P 500 is up 18%, Technology shares are up 26%, Financials up 14% and the market wants the Fed to cut rates because inflation expectations are dropping?

If stocks keep melting up, the Fed will be hard-pressed to cut rates. The economic data will weaken, inflation expectations will drop so it can sneak a rate cut in July but this environment is feeling a bit bubbly to me and I am worried another stock market bubble is upon us.

What is interesting, however, is how Consumer Staples (XLP) are making a new high led by stocks like Walmart (WMT) and Procter & Gamble (PG): 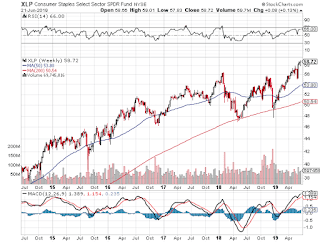 Obviously, many investors aren't buying the hoopla on Fed rate cuts and think it's time to get more defensive in their stock-market exposure.

Anyway, it was a monumental week for markets with major milestones in stocks, bonds, gold and oil, but I wouldn't get too excited here.

Below, DoubleLine Capital CEO Jeffrey Gundlach on Federal Reserve policy the US economic outlook, President Trump and former Vice President Joe Biden. Watch it here if it doesn't load below.

And Dan Suzuki, Richard Bernstein Advisors portfolio strategist, and CNBC's Mike Santoli join 'Squawk Box' to discuss the state of the markets amid concerns that the Fed will cut rates.

Lastly, watch Fed Chair Jerome Powell discuss interest rate policy and the US economy. You can read the latest FOMC statement here. Given the benign inflation backdrop, weakening economic data, the Fed can easily cut rates but unlike many, I'm not convinced it will cut rates this summer, especially if stocks keep making new highs.