Bankers Want to Continue Protecting Us? 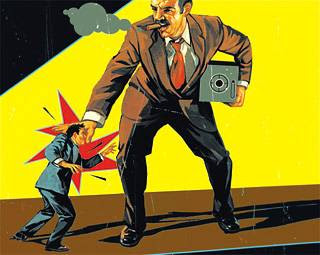 Diane Urquhart sent me this Toronto Star article by James Daw stating that bankers' group wants to continue to protect you:

anada's bankers have woken up. Hearing the cries for a supplement to the Canada Pension Plan or other larger-scale plan, they decided to use some gang-style protection tactics to guard and expand their turf.

Don't let the government suck money into a single, quasi-public, one-size-fits-all plan, their Canadian Bankers Association warns in a report released Friday. Let us continue to protect you.

"Requiring younger people to belong to a new contributory public retirement plan could have the effect of diverting income they need for other purposes such as near-term savings objectives and also may not result in actual increases in overall savings rates."

The report has several ideas for improving private-sector offerings – described in words familiar to careful readers of a 2008 paper by Toronto pension lawyer James Pierlot, A Pension in Every Pot: Better Pensions for More Canadians.

Governments should offer relief from taxes and rules, the banks argue.

Yet they make no mention of the drain on retirement income caused once banks and insurers receive our meagre savings.

Canada has the highest investment fund fees in the world, enough on average to bleed 40 per cent of future retirement income from the most diligent savers.

Most of these funds lag market and pension returns. There's also the occasional bad advice and outright larceny by employees of banks and associated securities dealers.

Yet the banks' solution for stretching dollars in retirement is to keep more of our money. They ask to be able to sell life annuities from their branches.

Jean-Pierre Laporte, another Toronto pension lawyer, called as early as 2006 for an idea the banks dismiss: letting employees and employers take advantage of the efficiencies and lower cost of the CPP.

So, naturally, he dismisses the bankers' suggestion that Canada's retirement savings system is working – and would work better if only the tax incentives were more attractive.

"For anyone to argue our system works is ridiculous," Laporte said after reading the report.

"It only works for employees of government and large enterprises. They don't really tell us why (allowing Canadians to contribute to a large-scale pension like the CPP) would be a bad thing. They are saying the current system works – for us – so don't fix it."

Pierlot agrees with the bankers that Canadians should have more choice of ways to save, including private-sector pensions that could serve multiple workplaces, the self-employed, members of associations and individuals. He proposed this a year ago.

Yet he asks: "If choice is a good thing, why not have the reforms the paper proposes as well as new government options?"

The bankers have put their weight behind other proposals included in Pierlot's paper for the C.D. Howe Institute, which is a good thing.

We should let everyone have as much tax-deferred retirement savings room as government employees, plus top-up room after breaks in employment or fluctuations in income. We should harmonize pension legislation across the country.

But Pierlot chides the bankers for treating statistics on retirement savings as though members of public- and private-sector pension plans are all the same. "The difference between the two sectors matters because one has a problem, the other doesn't," he says.

The bankers suggest things would be so much better for workers who rarely have a pension or save much before age 35 if they had more tax-assisted savings room later in life.

More saving room later in life would help, but it's hard to catch up even if you have the room. So starting early and having investment returns compound over many years is better, if you can do it.

I agree with Mr. Laporte, to claim that our pension system is working is simply ridiculous. The bankers, like the insurers, will vigorously defend the private sector solution for our ailing pension system but the reality is that they're charging outrageous fees and leave far too many people scrambling for retirement security. In short, the bankers will defend their profits but they're not delivering the goods at a reasonable cost.

Re:Bankers' group wants to continue
to protect you, Nov. 28

The Canadian Bankers Association, as you report, thinks there's nothing wrong with our retirement security system that their products can't fix. Their suggestion to meet growing poverty among seniors and the severe holes in our patchwork system of pensions is, not surprisingly, a better tax regime to encourage more investment in what they have to sell.

Even some bankers, however, acknowledge that our decades-long experiment with RRSPs has failed. Don Drummond, chief economist of TD Bank, has called RRSPs into question and suggested that we need stronger public pensions, such as higher benefits through the Canada Pension Plan.

Despite what the bankers association says, the wheels have fallen off. The value of RRSPs has tanked and Canadian financial firms charge some of the highest administrative fees in the world, contributing to the industry's hefty profits.

I say that the CPP is a dependable vehicle – a model of efficiency, portability and stability covering 93 per cent of workers in Canada. Improving CPP benefits, even doubling them over time, is achievable and affordable. A growing number of economists and actuaries are coming to the same conclusion, which clearly frightens the Canadian Bankers Association.

One caveat: we need to improve transparency and accountability at the CPPIB.