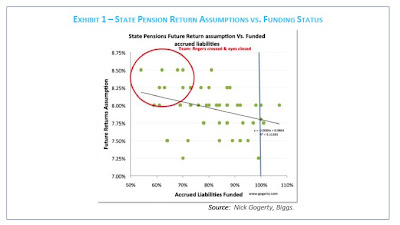 Mebane Faber of Cambria Investment Management sent me an excellent paper he authored, What if 8% is Really 0%? Pension Funds Investing with Fingers-Crossed and Eyes Closed:

It is well known that pension funds in the United States are underfunded even if they achieve their projected 8% rate of return. The scope of pension underfunding increases to an astonishing level when more probable future rates are employed. A reduction in the future rate of return from 8% to the more reasonable risk-free rate of approximately 4% causes the liabilities to explode by trillions of dollars. As bond yields declined over the past twenty years, pension funds moved toward more aggressive equity-based portfolios in an attempt to reach for this 8% return.

By investing in a portfolio with uncertain outcomes, pension funds could experience increasingly volatile and even negative returns. Paradoxically, in an effort to chase the universal 8% rate, pension funds may be laying the groundwork for returns even lower than the risk free rate.

In an effort to offer an empirical basis for this possibility, we conclude the paper with a relevant comparison - the return of a hypothetical Japanese pension for the past two decades. We believe that pension funds need to at least prepare for the unfathomable: 0% returns for 20 years. Most pension funds, regrettably, have not adequately stress tested their portfolios for these scenarios.

So how does a pension manager get 8% in the current environment? Mr. Faber writes:

With government bonds yielding about 4% plan sponsors must invest in other outperforming assets to bring the cumulative return to 8%. The problem with allocating assets away from the risk-free rate is that they are, by definition, risky and uncertain. If a pension manager is employing the benchmark 60% stock/40% bond allocation, the 60% in equity or diversifying assets must return approximately 11% to achieve 8% total returns.

The second major problem outlined in this paper is that pension managers, in an attempt to deal with the realities of underfunding, may be tempted to chase higher performing and riskier asset classes, and may end up compounding the underfunding problem even more through exposure to these risky asset mixes.

Interestingly, according to Biggs, the targeted equity allocation does not correlate with projected return. Even worse, as shown in Exhibit 1 (above), funds using the highest return assumptions have the most underfunded pensions, a scenario that could be called, “fingers crossed and eyes closed”

Mr. Faber goes on to write:

The focus on illiquid assets (private equity, venture capital and timberland investments, for example) made the Endowment Model particularly attractive to funds that in theory have long time horizons, such as endowments and pensions.

Yet, as real money investors sought diversification through the same methodology, their portfolios were, in fact, becoming more correlated to each other while portfolio risks were becoming more concentrated and increasingly dependent upon illiquid equity-like investments.

Most real money funds were not prepared for the following stress scenario to their portfolio:
The figures above are the peak drawdowns from the bear markets of 2008-2009, and, importantly, they all occurred simultaneously. It is critical that pension funds – especially funds pursuing high equity allocations – consider all possible stresses to portfolio viability.

Are funds prepared for a lengthy bear market in equities like when stocks declined nearly 90% in the 1930’s? Are funds prepared for both raging inflation of the 1970’s and 1980’s and sustained deflation like Japan from 1990 to the present? It is our opinion that most funds do not consider these outcomes as they are seen as extraordinary and beyond the scope of either feasible response or possibility.

He's absolutely right, the majority of pension funds are hoping -- nay, praying -- that we won't ever see another 2008 for another 100 years. The Fed is doing everything it can to reflate risks assets and introduce inflation into the global economic system. Pension funds are also pumping billions into risks assets, but as Leo de Bever said, this is sowing the seeds of the next financial crisis, and when the music stops, watch out below. Pensions will get decimated. That's why the Fed will keep pumping billions into the financial system. Let's pray it works or else the road to serfdom lies straight ahead. In fact, I think we're already there.

Below, Mebane Faber talks about the benefits of the ETF he manages, Cambria Global Tactical ETF (NYSE:GTAA). I thank him for sharing this paper with me.