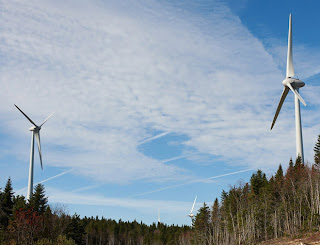 The money gives the Caisse a material financial interest in 13 wind fields, including 11 in the United States and two in Canada. Among the assets is Le Plateau, a 138.6-megawatt project in Quebec’s Gaspé region that sells all of its power to Hydro-Québec under a 20-year contract.

For the Caisse, the stake fits with chief executive Michael Sabia’s strategy to shift more money away from riskier but potentially more lucrative shorter-term assets into those that generate stable and long-term returns. All the wind farms the Caisse is buying into have secure multi-year sales agreements in place for their power, from which the pension fund will receive a portion of revenues.

“We think [renewables is] a sector that’s very attractive in the future… and that we wanted to have more exposure to,” the Caisse’s senior vice-president of infrastructure, Macky Tall, said in an interview Tuesday. “The cost of wind power has been progressing over time, the technology is evolving and will continue to evolve… What we are doing is investing in projects which are already operating.”

The Caisse’s other renewable energy investments include a stake in Longueuil, Que.-based power producer Innergex Renewable Energy Inc., in which it added a $98.9-million position this past summer. It also provided $25-million of debt for the Boralex Inc.-led Beaupré Wind Farms project, just north of Quebec City.

Partnering with Invenergy also allows the Caisse to balance out its heavy investment in Alberta’s oil sands, frequently criticized by environmental activists and other Quebecers.

“I’ve been to conferences recently where people accused the Caisse of investing in dirty power,” said Michel Nadeau, a former Caisse vice-president who is now executive director of Montreal’s Institute for Governance of Private and Public Organizations. “This gives them some energy diversification. And I think that’s a prudent course. A big money manager like the Caisse can’t take chances on one or another [energy technology]. It has to spread out its investment.”

According to U.S. regulatory filings, the Caisse had roughly $4.7-billion worth of equity invested in oil sands companies as of the end of September, including some $605-million in Suncor, $286-million in Cenovus Energy Inc. and $200-million in Imperial Oil Ltd. Its largest investment is in Enbridge Inc. with a stake valued at $1.8-billion.

Enbridge has six wind farm and three solar energy projects in North America, but its main business is transporting oil and natural gas by pipeline. The company is seeking federal and provincial approval for a project to bring Western crude east to Quebec refineries. Quebec and Alberta are jointly studying the proposal.

For Invenergy, the Caisse’s interest marks yet another vote of confidence in its management, led by well-known energy magnate Michael Polsky. The company, which is the largest independent wind power producer in North America, has raised more than $7-billion of financing from banks and other investors over the last decade to fund its business.

Invenergy typically owns and operates each facility that it develops, with 7,000 megawatts of power generation projects in development or in operation. Most of those are wind farms. Company officials declined an interview request.

Despite all the hype, clean energy excluding hydropower is projected to account for less than 10% of U.S. energy supply by 2040 and the industry cannot compete without tax credits provided through public money, Washington-based energy economist Charles Ebinger argued in a blog posting Monday.

He said under the new fiscal deal just negotiated, the wind industry will receive US$12-billion in aid over the next decade. He argues U.S. lawmakers should instead stoke the development of domestic natural gas reserves and approve TransCanada Corp.’s Keystone XL oil pipeline carrying crude from Alberta to U.S. markets.

“Every leading energy forecast [is] suggesting that for at least the next 30 to 40 years the world will remain dependent on fossil fuels which we have in untold abundance,” Mr. Ebinger wrote. “It’s time to get on with the job, find ways to strip out [carbon dioxide] from our oil, coal and gas production and to utilize what we can while sequestering the rest.”

I agree with Murdoch on infrastructure investments but disagree with him on global warming and don't think investing in renewable energy is "useless." We need to diversify our energy sources and this sector can potentially create many jobs that are desperately needed.

Interestingly, the Caisse isn't the only one interested in wind energy. Warren Buffett's Berkshire Hathaway recently bought two huge wind farms and Google just announced its latest investment in wind power through the construction of a $200 million wind farm in Texas. As you can see, some pretty savvy investors are also betting on wind energy.

Does this mean this investment will turn out to be profitable? Only time will tell but it is a sizable investment in renewable energy. I think the Caisse and others need to look at this sector carefully and judge each project on its merits and profitability.