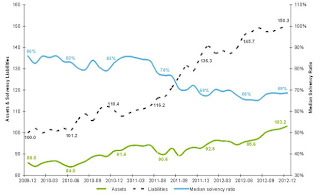 
Defined benefit (DB) pension plans’ solvency in Canada improved slightly in 2012 thanks to company contributions and a strong equity market, according to Aon Hewitt, the global human resource solutions business of Aon plc (NYSE:AON). The median pension solvency funded ratio – or the ratio of the market value of plan assets to liabilities — is approximately 1 percent higher this year than at the start of 2012.

According to Aon Hewitt, opposing factors had an overall positive impact on the financial status of defined benefit pension plans this year. On the one hand, interest rates continued their decline pushing up the value of liabilities of pension plans. The discount rate used to calculate the liabilities to be settled by annuity purchases in case of a plan termination went down from 3.31percent at the beginning of the year to 2.96 percent at the end of 2012.

On the other hand, equities performed well, with Emerging Markets leading the pack at 16.0 percent, followed by International Equities (15.3 percent), US Equities (13.4 percent) and Canadian Equities (7.2 percent). Pension plans invested in alternative asset classes such as Global Real Estate and Infrastructure were rewarded with returns of 25.8 percent and 11.7 percent respectively. Finally, most plan sponsors had to contribute towards their deficits due to minimum solvency funding requirements.

The combination of all these factors led to a slight rise in Aon Hewitt’s median solvency funded ratio of a large sample of pension plans from 68 percent at the end of 2011 to 69 percent at the end of 2012. About 97 percent of pension plans in that sample had a solvency deficiency as at December 31, 2012. The solvency funded ratio measures the financial health of a defined benefit pension plan by comparing the amount of assets to total pension liabilities in the event of a plan termination.

“There are mainly three ways that plan sponsors will see themselves out of this solvency conundrum,” said Thomas Ault, an associate partner in Aon Hewitt’s Retirement Consulting practice. "Through an increase in interest rates, favorable equity and alternative markets returns, or through higher employer contributions. We had two out of three this year.”

The following graph depicts the movement of assets, liabilities and funded ratios for this median pension plan since January 1, 2010 (click on image above).

The de-risked plan experienced a 79 percent solvency ratio as at December 31, 2012 as opposed to 69 percent for the median plan.

According to Aon Hewitt, there was, again, downward pressure on yields in 2012, and it is likely to continue in 2013. “The demand on long bonds by pension funds and insurance companies to better hedge their liabilities, foreign investors looking for a safe haven and the level of public debt are all contributing factors to this trend,” said André Choquet, a senior consultant in Aon Hewitt’s Investment Consulting Practice. "Plan sponsors may want to review not only their investment policy but their benefit design and funding policies if they believe we’re in this low rate environment for the long haul"

Aon Hewitt believes the following trends are likely to continue in 2013:


A few comments on the above release from Aon Hewitt. First, Canada's corporate pension hole marginally improved last year but 97% of the plans have a solvency deficit.

Second, de-risking into bonds turned out to be the right right strategy as it limited the deficit these plans occurred. And even though most investors are now advised to shift assets away from bonds, this is the first step for many corporations looking to follow GM and Verizon into an annuity settlement. These pension risk transfers are a boon to insurers and many Canadian insurers are busy carving out the pension turkey (remain long Canadian insurers).

But not everyone is taking this course of action. Bell Canada recently pumped $750 million into their employee pension plan and has no intentions of following Verizon on pension risk transfers. The President and CEO of a large Canadian corporation shared these insights with me when I asked him of what he thinks of pension risk transfers:


The problem about getting an annuity today is that, I think, the insurance company won’t pay for the current deficit. If interest rates don’t go up, the company won’t ever have the chance to reduce the deficit.

I’m hoping that one day our pension deficit will disappear with interest rates going up. This is the best answer I can give you for the moment.

He's right, the best way to reduce pension deficits is for rates to start climbing. Even better, a nice backup in yields and a melt-up in global equities will help many pension plans improve their funded status but it won't be enough to wipe away pension deficits.

As far as smaller plans shifting assets into alternatives using "pooled funds," I warn them to do their due diligence carefully. I've met with many hedge funds, private equity funds and funds of funds that specialize in both and will tell you straight away that most are not worth the fees they're charging.

Instead of doling out huge fees to alternative funds, a better approach is to beef up your internal staff and focus on smart tactical asset allocation. This approach carries its own risks but at least you can control these risks much more tightly and pull the plug the minute your risk parameters have been breached.

In the United States, corporate pensions are not faring any better as they posted record deficit in 2012:


Pension plans sponsored by S&P 1500 companies finished 2012 with the highest year-end deficit ever. The aggregate deficit for these plans grew to $557 billion as of December 31, up from $484 billion at the end of 2011.

The overall funded ratio for these plans also declined slightly, down 1% from the 75% ratio seen at the end of 2011.

“Despite U.S. and non-U.S. equity indices outperforming expectations, interest rates on high-quality corporate bonds declined by more than 80 basis points in the calendar year, driving discount rates down and plan liabilities up significantly, with the overall result a significant decline in funded status for most plans,” said Jonathan Barry, a partner with Mercer’s retirement consulting group.

The funded status deficit would have been worse if not for the estimated $60 billion in expected 2012 contributions made by these companies.

“In 2012, we saw some landmark transactions in the risk transfer space, with Verizon, General Motors and Ford announcing various combinations of annuity purchase and participant lump sum offerings as a means of eliminating some plan liabilities. We anticipate this trend will continue in 2013 and beyond, as corporate defined benefit plan sponsors are becoming more focused on risk-management issues and many are poised to make significant changes.”

Many corporations are looking to unload pension risk to insurers but I personally think they are making a huge mistake. If it's a matter of financial survival, I understand, but a cash-rich corporation that is not topping up its employee pension plan is not making a wise financial decision and is sending the wrong message to its employees (go back to read my comment on BCE not following Verizon).

Below, Michael Gayed, Chief Investment Strategist, Pension Partners appeared on CNBC discussing what the Fed might be hinting at when the minutes revealed that officials are considering stopping QE before end-2013. Listen to Michael as he has been calling these markets right.

I agree on cyclical risk rotation. I remain long sectors leveraged to global growth, focusing on coal, copper, steel and now keeping my eye on shipping stocks which surged on Friday on huge volume.