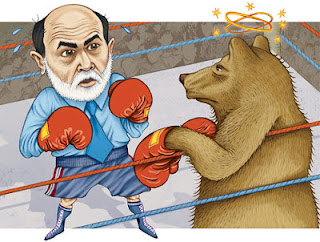 
You have to wonder how long an industry that underperforms the broader market will stay around.

Goldman Sachs Group Inc. published a chart today comparing the performance of hedge funds that invest in equities with the major stock-market indexes. Based on Goldman's research, the average hedge fund is up just 5.4 percent so far this year. During the same period, the Standard & Poor's 500 Index has risen 15.4 percent, and the average mutual fund has gained 14.2 percent (click on image below). 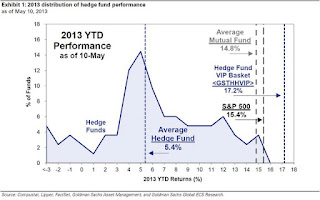 This kind of subpar showing surely can't sit well with investors who shell out as much as 20 percent of their gains to the fund manager, who also collects a fee that can be as much as 2 percent of the assets under management.

There could be any number of explanations for why hedge funds have done so badly. Goldman says many hedge funds bet against stocks such as Johnson & Johnson, expecting them to fall. They rose instead.

Then there's the lack of volatility. Hedge funds often profit from discrepancies in prices between related assets, and these tend to shrink during calm periods in financial markets.

Based on one of the most widely watched measures of stock-market volatility, the VIX Index, we're in the equivalent of the horse latitudes. The VIX recently registered a read of about 13, compared with a high of almost 90 at the peak of the financial crisis in October 2008 and more than 40 in the summer of 2011, when worries peaked that Greece might exit the euro monetary union. The VIX has been a snore this year, bouncing between 12 and 18.

The biggest reason for the market tranquility might be the Federal Reserve's repeated assurances that it will maintain zero interest rates and provide monetary stimulus until the economy recovers, and unemployment ebbs.

That may just account for the recent flurry of stories about how much hedge-fund managers hate Fed Chairman Ben Bernanke. He's putting them out of business.

More importantly, the majority of hedge funds are not  worth paying 2 & 20 in fees. With or without Ben Bernanke, hedge fund Darwinism will continue to impact the industry. The institutionalization of the industry means that only the very best funds will be able to meet the increasingly stringent demands of institutional investors.


As banks abandon debt trading, hedge funds that bet on bonds and loans are pulling in money from investors and hiring traders. Debt-focused hedge funds drew $41.4 billion from pension plans, wealthy individuals, and other investors in 2012, the most since 2007, according to data from Hedge Fund Research. They managed a total of $639.7 billion as of March 31, HFR data show, surpassing stock-trading hedge funds, with $638.7 billion.

Regulators are demanding that banks curb proprietary trading—betting with their own money—and hold more capital to back riskier investments. That’s allowed hedge funds to expand in businesses the banks are leaving, including distressed-debt trading and fixed-income arbitrage, a strategy that seeks to exploit short-term price differentials. “Hedge funds are playing in asset classes where they previously hadn’t played,” says Jason Rosiak, head of portfolio management at Pacific Asset Management. 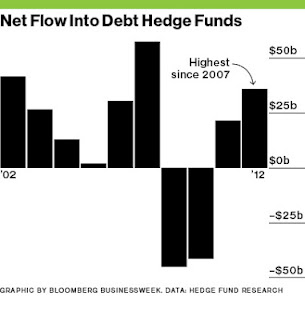 Hedge funds specializing in debt trading are still minnows compared with Wall Street’s largest houses. BlueCrest Capital Management, Pine River Capital Management, and Millennium Management, three of the fastest-growing funds, have combined assets of about $67.6 billion, according to people with knowledge of the matter who asked not to be identified because the information is private. JPMorgan Chase’s (JPM) corporate and investment bank had an average of $413.4 billion in assets designated for trading in the first quarter.

Still, the hedge funds are growing rapidly, luring bankers from JPMorgan, Deutsche Bank (DB), Barclays (BCS), Bank of America (BAC), and others. BlueCrest doubled its New York staff in the two years through December, while Pine River increased its global workforce by a third in 2012. Millennium expanded its staff by 32 percent, to 1,250 people, last year. James Staley, the JPMorgan executive who was once seen as a candidate to run the company, quit in January to join $13.6 billion hedge fund firm BlueMountain Capital Management. “There’s a continuous brain drain on Wall Street,” says Rosiak.

Hedge funds, which are considered part of the less regulated “shadow-banking” system, are not subject to the rule. The idea behind regulators’ push to move debt trading from banks to hedge funds is to transfer the risk “into relatively small repositories that will be relatively insignificant if they fail,” says Roy Smith, a finance professor at New York University’s Stern School of Business. “The regulatory posture in the U.S. and in Europe is unequivocal. They want to transfer risk to the shadow-banking system.”

Yet moving risk to hedge funds does not make it go away. In 1998 hedge fund Long-Term Capital Management lost more than $4 billion after a debt default by Russia, mostly as a result of a fixed-income arbitrage strategy. The Federal Reserve was so concerned about the impact that it arranged a bailout paid for by banks. “If the hedge fund firms fail,” says Smith, “the real question is, to what degree will the market suffer from it?”

I've already covered bankers jumping ship to hedge funds. The growth of debt hedge funds has been fueled in large part by the Fed's quantitative easing which has revived structured credit strategies. Just how well these funds will perform in the future remains to be seen now that bonds hear bubble echoes.

Also, the Fed isn't the only central bank engaging in massive quantitative easing.  I've discussed the seismic shift in Japan and how Abenomics revived global macro funds. But shorting the yen and going long Japanese equities has become a crowded trade and some are worried that Japan is the new Apple.

I don't know. All I know is that the tsunami of liquidity keeps propelling risk assets higher, making nervous investors even more nervous. Some old time traders think it's time to throw out your playbook, reminding us that even though the bears are right to look at the weak macro backdrop, bull cycles often don’t make any sense at all.

I've been warning my readers of a melt-up in stocks for the longest time and think multiple expansion will continue despite rumblings of a Fed pullback. Will a rotation occur out of defensives into cyclical sectors or will defensives be the new bubble? That remains to be seen. All I know is that as long as the music keeps playing, risk assets will go higher, forcing many funds to keep dancing despite their fears of what happens when the music stops.

Finally, I didn't go over top funds' activity in Q1 2013. Those of you who want to look into their top holdings can refer to the links in my Q4 2012 comment. Be careful, however, as the data is lagged and many of the top holdings are way overbought on a weekly basis and others are just languishing and not participating in the broader rally.