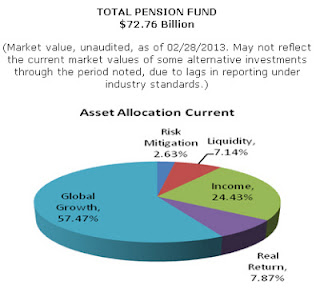 Domestic equities in the fund’s portfolio returned 20.52 percent through April 30, while non-U.S. equity gained 24.58 percent. The fund’s assets are valued at $75.3 billion, up from $71.8 billion a year earlier.

The total return missed the fund’s 14.54 percent benchmark, partly because of a reporting lag from alternative investments such as hedge funds. The return may be as much as 14 percent, according to a report by Tim Walsh, director of the state’s investment division. Treasuries and Treasury inflation-protected bonds, or TIPS, underperformed equity and credit markets, while emerging market exchange-traded funds also hurt performance, he said.

“We continue to watch markets, we continue to diversify, we continue to try to make the best decisions we can, even in a volatile world, on behalf of the pension-fund beneficiaries,” Bob Grady, chairman of the State Investment Council, said at a meeting in Trenton today.

New Jersey’s seven public-employee pensions cover more than 780,000 working and retired teachers, police officers and government workers. The funds, minus one for police and firefighter mortgages that are reported on a lag, gained 1.78 percent in April.

The Division of Investment is responsible for the investment management of the seven pension funds that comprise the New Jersey Pension Fund and the State of New Jersey Cash Management Fund. The Director's monthly investment reports are available here and the latest annual meeting presentation is available here.

The results year to date reflect strong returns of U.S. and foreign equities. The underperformance relative to benchmark is because of a reporting lag from alternative investments which include private equity, real estate, and hedge funds (see my last comment on CPPIB's FY 2013 results to understand how reporting lags between alternatives and public markets make yearly comparisons to benchmarks obsolete).

Overall, the results are excellent, in line with other large U.S. pension funds like CalPERS which returned 13% in 2012 on strong gains in public equities. New York state's pension fund recently announced that it reached a record $160B:


The New York pension fund for state and local government workers has topped $160 billion after reporting a 10.4% return on investment for its last fiscal year, the state comptroller's office reported Monday.

The Common Retirement Fund's estimated value was $160.4 billion at the end of March, an all-time high for the fund that pays benefits to more than 413,000 retirees and beneficiaries, said Comptroller Thomas DiNapoli, its trustee. It has now restored all $44 billion lost during the recession starting in 2008 and added $6 billion more, largely from rebounding stock prices.

"It remains well-positioned for growth as the financial markets continue to gain strength," DiNapoli said. The 2014-2015 fiscal year starting next April will be the last with higher employer contributions required reflecting the recession losses, he said.

"We have one more year of rate increases that local governments will have to pay," DiNapoli said. The increase, based on an actuarial study, will be announced in August and should be smaller than recent increases, he said.

The fund had 36% of its assets in domestic stocks, returning 14.5% for last year, and nearly 14% in international equities, returning 9.5%, according to the comptroller's office.

"We have had movement away from public equities because of volatility in the stock market," fund chief investment officer Vicki Fuller said. An allocation plan established in 2009 calls for reducing combined domestic and international equities, now accounting for 50% of the portfolio, down to 43%, she said.

They are also restructuring their operations with more emphasis on staff performing due diligence and underwriting on investments and less on outside consultants, Fuller said.

The lesson of 2008 for these pensions was to keep their long-term view in equities but also start diversifying away from public equities into alternative investments. Will this strategy work? If they can internalize the due diligence and negotiate hard on terms, cutting costs and minimizing fees in private equity and hedge funds, the added diversification should increase returns and lower the volatility of their funds over the long-run.

Are there risks with alternatives? Of course, especially in this environment of ultra low interest rates where cheap money is flooding the system in search of higher yields. The hardest part is knowing when to back out of deals and funds because you think they're too risky/ pricey and not worth taking on more illiquidity risk.

Even CPPIB, which enjoys a much better liquidity profile than other large funds, is showing concerns over the current environment in private markets and they think deals are poised to taper off this year. Another fund that enjoys very strong liquidity is PSP Investments, which recently purchased Hochtief's airport unit in a direct deal worth $1,4 billion.

But CPPIB and PSP Investments are relatively young organizations with strong cash flows for many years to come. They're in the position to take on illiquidity risk but even they are very selective in the funds, deals and approach they take when investing in illiquid asset classes.

Below, Timothy Walsh, director of the Division of Investment for New Jersey's pension fund, and Bob Rice, managing partner at Tangent Capital Partners, talk about investment strategies and alternative assets. They speak with Deirdre Bolton on Bloomberg Television's "Money Moves."