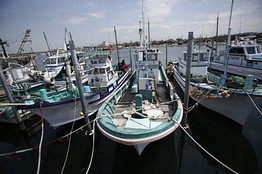 
Since the Bank of Japan unleashed a massive new easing program last month, European and U.S. investors have waited with bated breath for more BOJ bond buys to push Japanese lifers overseas. The truth: Japanese pension funds are already ahead of them.

They’ve been putting more of the world’s second-largest pool of retirement funds into everything from global real estate to Namibian debt.

According to a survey of 128 funds released in April by J.P. Morgan Asset Management, pensions cut the share of domestic bonds to 29.4% of their assets by the end of March from a targeted level of 35.4% four years earlier, and domestic stocks to 13.9% from about 22%. That’s made room for alternative investments such as real estate and foreign debt to nearly double to 11.8%.

Consultants and fund managers say they’ve got no choice but to find something less risky than stocks, but better yielding than domestic bonds, as payouts for Japan’s aging population rise.

“If you diversify your assets, add some returns from real estate, absolute return products, you can get income no matter whether overall rates are rising or falling,” said Toru Higuchi, head of investment management at the Teachers’ Mutual Aid Cooperative Society.

The fund is in the middle of a two-year overhaul that will put more of its 600 billion yen ($5. 81 billion) in overseas stocks and bonds, and for the first time ever, a maximum of 2% each in hedge funds, global real estate investment trusts and J-REITs, while cutting domestic stock holdings.

Daisuke Hamaguchi, manager of nearly ¥10 trillion at the Pension Fund Association, said his fund will finalize its first infrastructure investment by the end of the year in cooperation with a Canadian pension fund, and will gradually expand its investments in other alternative assets.

Some investors have hypothesized that an improvement in corporate profits on the back of Prime Minister Shinzo Abe’s pro-growth policies could encourage corporate pensions to be more adventurous in taking risk. Expectations for Abenomics have lifted domestic stocks and weakened the yen, potentially clearing the way for investment in equity or unhedged foreign bonds.

Mr. Kouta added that corporate pensions are likely to be cautious about simply increasing their investments in foreign bonds in the coming year as yields on foreign sovereign debt have also fallen, making the risk of going abroad greater than any potential return. Neither will they be looking for more currency exposure even after the yen has fallen against major currencies in recent months, he added.

“We have been suffering from a stronger yen for many years, and some people believe it (the weaker yen) is still just a dream,” Mr. Kouta said.

The seismic shift in Japan is driving the change in asset allocation among Japanese pensions. Last October, the country's main pension, the GPIF, signaled it was shifting into alternatives and others are now following suit.

Who benefits from all this liquidity? Obviously, U.S. and global stock and bond markets. I've discussed this in a recent comment covering why bonds hear bubble echoes. Who else benefits from the unleashing of this liquidity? Global hedge funds and private equity giants looking to capitalize on distressed debt opportunities across the world. Real estate as an asset class will also benefit, bolstering its already prominent status among pension portfolios.

Investors need to beware, however, as all this liquidity will fuel the global bond bubble, lead to multiple expansions in global stock markets and lead higher multiples and much pricier deals in private market assets. As Leo de Bever told me, everyone is riding the liquidity wave but once the music stops, it will be ugly.


Pension funds are cutting equity holdings in favor of bonds even as central-bank stimulus helps push the FTSE 100 to the highest level since October 2007. Some 30 percent of respondents to the Mercer survey said they plan to reduce their allocations to domestic stocks further, with 24 percent intending to cut investments in overseas shares.

“Pension schemes across Europe, but particularly in the U.K., remain on a path towards a lower-risk investment strategy,” Nick Sykes, European director of consulting in Mercer’s Investments business, said in a statement today.

The survey covered more than 1,200 pension plans from 13 countries, with combined assets of more than 750 billion euros ($965 billion), according to Mercer, a unit of New York-based Marsh & McLennan Cos.

While pension funds are trimming equity investments, central banks are buying stocks in record amounts amid falling bond yields. In a survey of 60 central bankers last month by Central Banking Publications and Royal Bank of Scotland Group Plc, 23 percent said they own shares or plan to buy them.

The Bank of Japan, holder of the second-biggest reserves, said April 4 it will increase investments in equity exchange-traded funds more than twofold to 3.5 trillion yen ($34.1 billion) by 2014. The Bank of Israel plans to almost double stock holdings to as much as 6 percent of foreign-exchange reserves, or about $4.5 billion, by the end of 2013.

Of course, these pensions are also shifting into alternatives so they too are taking on more illiquidity risk. This can come back to haunt them if there is a major dislocation in global markets but right now global pensions don't have much of a choice but to diversify into alternatives.

Below, Bill Gross, co-chief investment officer at PIMCO, talks about the outlook for bond and stock markets and investment strategy. Gross, speaking with Erik Schatzker and Sara Eisen on Bloomberg Television's "Market Makers,” also discusses Federal Reserve and Bank of Japan policies. I too see bubbles everywhere and think we are still in the early innings despite rumblings of a Fed pullback.