At the SALT conference last week, John Graham, senior managing director and global head of credit investments at CPPIB, said that the growth story in emerging markets is compelling:


“Up to one-third of the Fund is set to be invested in emerging markets” he said. “We’re playing the long game.”

Approximately 20% of the pension’s portfolio is currently in emerging market investments. Graham highlighted the growth opportunities in China, noting that rule of law has improved. “The legal framework in many emerging markets is getting better,” he said. “The courts in Shanghai and Beijing are actually very good.”

According to Graham, emerging markets are not only more mature and resilient than they once were, the growth of their consumer classes is likely to continue even if the developed economies start to show signs of weakness. Emerging market economies are also taking steps to become more investor and creditor friendly, in contrast to trends in some developed economies. “There are plenty of European countries that aren’t creditor-friendly and won’t be,” Graham said. He added that it’s important for investors and managers to focus on rigorous due diligence in emerging markets. There are still concerns about fraud, but the process is worth it in countries that are willing to work with investors and creditors, and maintain rule of law, he said.

As far as domestic credit markets, Graham said he was positive on the collateralized loan obligations (CLOs) market and CPPIB is working with its credit managers to identify large, scalable opportunities in this area.

But it's the call on emerging markets which caught investors' attention. Ironically, as Graham spoke at the SALT conference in Las Vegas, emerging-market equities (EEM) experienced their worst rout since February 2018 as trade tensions escalated between China and the US: 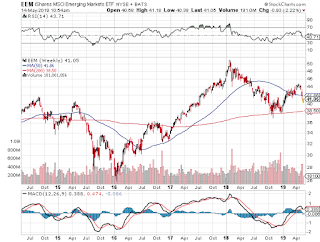 However, it's important to understand that CPPIB isn't just investing in emerging-market stocks and bonds, it's increasingly investing in private markets in China, India, Brazil and elsewhere, recognizing that while there will be bumps along the way, over the long run, this is where growth will come from.

Of course, rule of law in a communist country like China is not yet what it is in Western democracies. However, as Suyi Kim, senior managing director and head of Asia Pacific at CPPIB mentioned in an interview with CNBC (see below), the desire to do business with funds like CPPIB may be a spur to reforms in emerging markets.

That said, with Canada-China relations strained over its detentions of Canadians amidst a dispute with the Americans over Huawei, CPPIB is walking a tightrope to ensure it doesn't get embroiled in any diplomatic dispute.

The key to success in emerging markets is solid partnerships and having qualified people on the ground developing these partnerships, Suyi Kim has said, noting her team needs to navigate the different languages, regulatory structures, and rules, before even thinking about looking at different asset classes.

For me the most important part of Kim's short interview is when she explains how people's perception of CPPIB has changed over the last ten years: "We’ve built a 10-year track record on dependability and transparency. Having a lot of capital does not differentiate us in Asia. What differentiates us is being a sophisticated long-term investor and having strong talent on the ground."

When I met up with Michel Leduc, senior managing director and global head of public affairs and communications at CPPIB, the day before Toronto's annual spring pension conference, he reiterated this point: "We cannot compete with large sovereign wealth funds writing huge cheques, so we like to find large complex deals others shun where we think we can add value."

Switching our attention to India, Mark Machin, president and chief executive of CPPIB, and Vikram Gandhi, a senior adviser to CPPIB, had an interview with Deal Street Asia on investments in internet companies, the good and the bad of the India opportunity and it's huge importance for the pension fund.

More recently, Mark Machin, CEO of CPPIB told CNBC the fund is a "substantial" investor in Alibaba and it is also watching the trend of the rising middle class in India and China.