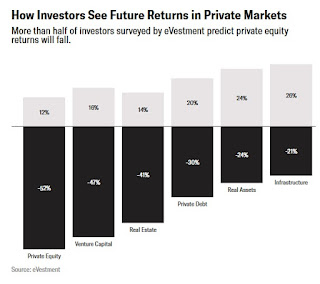 Institutional Investor reports that according to an eVestment survey, more investors are lowering their expectations for private equity than any other area of private markets:

Competition for deals has intensified after record fundraising in private markets, making this a top concern for investors and fund managers, the survey found. High valuations may dampen returns, particularly as a majority of those surveyed expect a significant market correction within two years.

“We’ve been in very buoyant markets for some time,” Graeme Faulds, eVestment’s product director for private markets business, said in a phone interview. Investors are more worried about valuations than fund managers, he said, reflecting managers’ confidence in driving performance despite paying higher prices for companies.

Thirty-eight percent of investors such as pensions and endowments are “very concerned” about private market valuations, eVestment found. Many fund managers had a starkly different perspective, with 36 percent saying they had “no concern” about valuations.

They're not the only ones concerned about private equity valuations. Warren Buffett recently slammed private equity for inflated returns and risky debt.

“We have seen a number of proposals from private equity funds where the returns are really not calculated in a manner that I would regard as honest,” Buffett said at Berkshire Hathaway’s annual meeting. “If I were running a pension fund, I would be very careful about what was being offered to me.”

Buffett added this: “Covenants to protect debt holders have really deteriorated. I would not get excited about so-called alternative investments.”

For pensions, private equity remains an important asset class which has historically outperformed public markets and delivered substantial benefits to their beneficiaries.

Still, with money pouring into the asset class, there are legitimate concerns that valuations have reached unsustainable levels and this will impact future returns. Despite these concerns, money keeps pouring into private equity but investors are selectively targeting countries like Brazil, Italy, and Japan. Asia in general remains hot for private equity but investors may have to get creative there.

Another interesting trend worth noting is how private equity funds are raising huge sums for ESG/ impact/ sustainable investing. TPG and KKR are the biggest names in the space collecting billions for their impact investing funds. TPG is seeking to raise $3.5 billion for its second Rise fund after collecting $2 billion for the first in 2017, while KKR is soliciting $1 billion for its inaugural fund.

While some large pensions like the Netherland's PGGM are increasing impact investments through private equity funds, others are more careful in their approach.

Mark Machin, CEO of CPPIB, recently told Business Insider he's skeptical of the impact investing strategy and fully focused on performance and considers ESG factors in terms of the effect on CPPIB's risk-adjusted returns, not the good that ESG does for the world:


"We really believe that good ESG behavior is correlated with reduced risk and enhanced return," he said. "It's not something you need to wrestle with."

Any ESG policy decisions for the fund must come out of rigorous analysis, Machin said. He cited CPPIB's board voting policy enacted in December that pushes for more women on boards as one example: The policy came only after internal research on 3,800 stocks and a meta-analysis of external studies that concluded that board diversity increases returns.

"That's where we say 'OK, that does increase risk-adjusted returns, so we should be expressing that view,'" he said. "With other people raising ESG funds, they're going to have to show that type of skill, and I haven't seen anyone show that skill yet, actually over and above what we could do ourselves."

Machin isn't keen on various ESG ratings from a host of data providers, either.

"It's so noisy right now," he said. "You could be at the top of one set of ratings and at the bottom of another set of ratings. There's no alpha in externally-provided ESG ratings. That's a problem. It requires a lot of work internally to actually create any sort of excess return."

This morning, I read a comment from Axioma's Anthony Renshaw on evaluating consistency across ESG vendors which confirms Machin's views.

More importantly, I'm skeptical of private equity's push into impact or sustainable investing. The large brand name funds see it as an opportunity to raise more assets, but the truth is very few of them have the expertise of funds like Earth Capital Partners and other niche funds that have been doing this for a very long time.

Below, Raymond Svider, chairman at BC Partners, discusses the changes to and the state of the private equity market and what comes next for his firm. He speaks with Bloomberg's Erik Schatzker from the Milken Global Conference on "Bloomberg Markets." Very interesting, listen to what he says about looser covenants on debt and how they benefit investors and creditors.

Next, Earth Capital Partners was founded in 2008 by Stephen Lansdown and Gordon Power. It manages over $1.5 billion in sustainable private equity assets and has offices in Beijing, Guernsey, Hong Kong, London and Rio de Janeiro. Watch the corporate profile below.

Lastly, David Rubenstein, co-founder of The Carlyle Group, was recently interviewed at Harvard Law School where he discussed his life, the skills needed to raise funds for a private equity fund and the future of the private equity industry. Take the time to watch this, Rubenstein is a great communicator.