Are State Pensions the Real Problem? 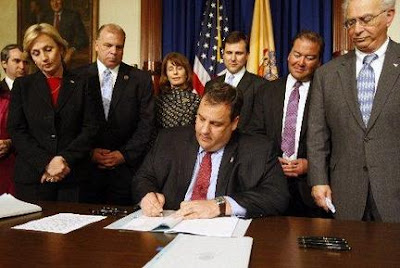 Ezra Klein of the Washington Post asks, How much can we blame on state pensions?:

Wondering why New Jersey isn't finishing its much-needed commuter tunnel to New York? Easy, says David Brooks. Blame public employees, their pensions and their pay. "States across the nation will be paralyzed for the rest of our lives because they face unfunded pension obligations," he writes.

State pension systems are a problem. But they're not the problem right now. And they're certainly not what's standing between New Jersey and its tunnel. After all, Christie didn't fund the pension system this year. He simply skipped the $3.1 billion payment, saying he wouldn’t add money to a "broken" system. If I didn't buy lunch today, you can hardly blame the cost of my lunch for the fact that I don't have bus fare.

Brooks's column doesn't do much to put the pension obligations of the states in context, so we'll do it here. Just today, Alicia H. Munnell, Jean-Pierre Aubry and Laura Quinby released a paper (pdf) tallying up the pension problem. "Public plans are substantially underfunded," they conclude, but "in the aggregate, they currently account for only 3.8 percent of state and local spending." Roll that around for a minute. Pension obligations currently account for 3.8 percent of the average state's spending. That's not where the current crisis is coming from. If you want to see where the state fiscal crisis is coming from, turn to this graph from the Milken Institute (click on image to enlarge):

"The problem in this moment," says Betsy Zeidman, director of the Center for Emerging Domestic Markets at the Milken Institute, "is revenue." The word "revenue," incidentally, doesn't appear in Brooks's column.

But that's what changed. In the months before the financial crisis, in fact, states had built up record rainy-day funds and were starting infrastructure projects. Then Wall Street collapsed, and so too did the revenue states got from taxing property, incomes and sales. At the same time, the need to spend on social services went up rather than down. The result? A terrible strain on state budgets. But not one you can blame public employees for.

If you look forward 10 years, of course, pensions become a much bigger problem. But not the biggest one. "Assuming 30-year amortization beginning in 2014, [pensions] would rise to only 5.0 percent [of total state spending] and, even assuming a 5 percent discount rate, to only 9.1 percent." Just like for the federal government, it's health-care spending, not pensions, which poses the greatest long-term threat to the states (click on image to enlarge):

Brooks also attacks public-sector employees from another angle: "Nationally, state and local workers earn on average $14 more per hour in wages and benefits than their private sector counterparts," he writes. This relies on a loose definition of the word "counterpart." It doesn't mean "compared to the workers like them." It means "compared to the average worker."

If you compare workers (pdf) of like education, experience, etc., you'll find that blue-collar workers in the public sector do a bit better than blue-collar workers in the private sector, but white-collar workers do a lot worse. The calculations that compare average wages neglect to mention that public-sector jobs tend to be white-collar positions, while most positions in the private sector aren't. More than half of all public employees have college degrees, compared to about 35 percent of private-sector employees. What's that? You want a table? (click on image to enlarge):

This shouldn't be too much of a surprise. Ever talked to a lawyer who works for the government, or a teacher? Have they ever told you they signed up with the public sector because the money is so good? Meanwhile, would that we'd offered more money, and attracted more talent, to the regulatory agencies in the run-up to the crisis. That investment would have paid for itself a thousand times over.

Then Brooks takes one final turn: "This situation, if you’ll forgive me for saying so, has been the Democratic Party’s epic failure," he says. He's forgiven, but he's also, well, wrong. As any expert can tell you, most every state is facing these problems over the next few decades. Are we really to believe that Democrats are dominant in every state legislature in the country?

Moreover, state budget problems have a spending side and a revenue side. Democrats (and some Republicans) and the unions have increased spending on public employees. But Republicans (and some Democrats) and business interests have passed massive unfunded tax cuts that turned pension programs into ticking time bombs. See California for more on this play. There's plenty of blame to go around.

There are real challenges facing states in the coming years. But these are serious, complex challenges, not a simple morality play in which we just need to get tough with state employees and all will be well. In the short-term, the problems facing states -- the problems that are forcing them to stop construction of ongoing projects -- are not driven by pensions or public employees, but by the financial crisis.

The challenges facing them later are not nearly so simple as greedy state employees or runaway pension spending. Health care is a major player here, as it is everywhere else. And while states are facing serious pension problems because they still offer defined-benefit pensions, we're also going to see the retirement of millions of private-sector workers who don't have defined-benefit pensions, and either haven't contributed enough to their 401(k)s or saw their wealth wiped out in the recent turmoil. We're facing a pension crisis in the public sector, but we're also looking at a retirement crisis in the private sector.

These problems aren't going to be easy to fix, and there's going to be plenty of pain to go around -- including for unions. But before we can start working on solutions, we need to describe the challenges clearly.

I agree with the author. Put in perspective, underfunded state pensions are not the driving force behind ever widening state budget deficits. Having said this, in an era of austerity, public pensions will not escape deep cuts, that much I can guarantee you.

And then there is the potential muni meltdown. Municipal pensions face a $500 billion deficit, and states are already $3 trillion in the hole, according to a new study by the Kellogg School of Management. Below, Alexandra Lebenthal, of Lebenthal & Co. and Ben Thompson of Samson Capital discuss the municipal bond market.