A follow-up to my recent post on the luck of the Irish running out. Bloomberg reports, Irish National Pension Fund Posted 1.9% Return in Third Quarter:

The fund’s so-called directed investments in the country’s two biggest banks, Allied Irish Banks Plc and Bank of Ireland Plc, delivered a return of minus 2.5 percent, the NPRF in Dublin said in an e-mailed statement today.

The return on the fund’s discretionary portfolio was 3.6 percent. That fund amounted to 17.9 billion euros at the end of September, it said.

The National Pensions Reserve Fund (NPRF) has suffered a loss of €400m on the investments it was forced to make in Bank of Ireland and AIB, according to figures released last night.

In 2009 the NPRF invested €3.5bn in preference shares in AIB and the same amount in Bank of Ireland.

However, this €7bn investment was worth €6.6bn by the end of September, according to data released by the NPRF.

Overall the fund showed a return of 4.9pc in the nine months to the end of September. It brings the total value of the fund to €24.5bn.

The NPRF was instructed by Finance Minister Brian Lenihan to make the "directed investments" to meet the banks' capital requirements.

Some of the preference shares have since been converted into ordinary shares, which have fallen in value.

The most recent figures do not take into account the fall in the value of AIB shares since its effective nationalisation was announced on September 30.

News of the losses comes as the NPRF prepares to pump up to €5.4bn in equity into AIB on behalf of the State at a fixed price of 50c per share.

Based on AIB's closing share price of 32.4c yesterday, the NPRF will suffer an immediate loss of €1.9bn if it funds the full amount.

The set price per share for the fundraising makes it highly unlikely that any private investor will buy into the deal.

The fund had €4.14bn of cash on its books at the end of September. It can support the AIB capital raising with a mix of fresh cash and by converting some of its preference shares into ordinary shares.

The NPRF said the return on the directed investments was 1.9pc between January and September, but fell 2.5pc between July 1 and the end of September.

Directed investments account for 27pc of the total wealth managed by the NPRF.

The return on investments not ordered by the Government was 6pc in the nine months to the end of September.

Strong performance by the listed equities that make up over half the investments was the main driver of growth.

As well as quoted shares, the fund also has investments in Eurozone government bonds, corporate bonds and in property and private equity.

While the losses on bank shares are a concern, one debt market source said the multi-billion scale of the NPRF meant it had "an ace up Ireland's sleeve, heading into 2011."

Ireland is the only one of the so called "peripheral euro economies" to have such a large savings account to fall back on.

The NPRF receives an annual investment from the Government and is not due to begin paying out on its investments until 2025.

Its investment objectives include a target of outperforming the cost of five-year government debt over rolling five-year periods.

A copy of the National Pension Reserve Fund's report is available on their website. Not sure if the NFRP has an "ace up Ireland's sleeve", but as shown below, the asset mix is fairly aggressive with almost 70% made up of listed equities and alternative assets (they are thus far not allowed to buy Irish government bonds; that may change): 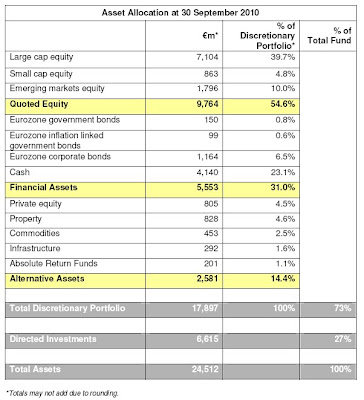 Just like CPPIB and PSPIB, the NFRP is lucky because it is is not due to begin paying out on its investments until much later (2025 for NFRP). That means it can afford to take on more risk in its asset mix and does not have the liquidity constraints of more mature pension plans. Having said this, these so-called "directed investments" will be scrutinized as will further political interference in the investment decisions. If these investments blow up, who will be accountable to Irish pensioners?