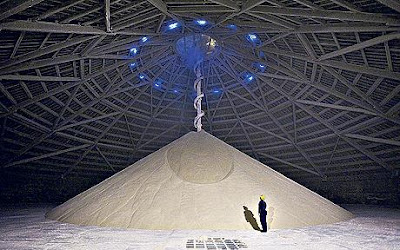 The newspaper said the pension fund was talking to Temasek, Singapore's sovereign wealth fund, about launching a rival offer. The report said the two also had an industrial partner, thought to be Teck Resources , a Canadian mining group.

The discussions are at an early stage but the two funds are considering an outright takeover or buying a minority stake at a higher price than that offered by BHP.

British papers The Times and The Sunday Telegraph also said Potash was considering defensive moves, which could include a break-up of the business to fend off BHP.

Both newspapers said one move Potash could make is to sell its nitrogen and phosphorus operations and return up to $70 a share to its shareholders.

The Telegraph said Potash was talking to groups such as OTPP and others, which had received strong support from the Canadian government.

No one from the London offices of the Ontario Teachers' Pension Plan was immediately available to comment. A spokeswoman for Potash declined to comment on the reports.

In an interview to the Globe & Mail, Potash's CEO, Bill Doyle, said BHP’s $130 per-share offer, which values the company at $38.6-billion, is “a non-starter” and he bluntly predicted that Potash Corp.’s stock would “blow the doors off” its record high of about $240 if the company were to stay independent:

However, the decision will be made by Potash Corp. shareholders, he added.

Potash Corp. has argued BHP’s bid is opportunistic, made just as it believes potash prices are poised for a recovery as fertilizer demand increases amid concerns of a global food shortage.

The company’s stock reached an all-time peak of $239.50 on the New York Stock Exchange on June 17, 2008, before a wrenching dive as the commodity boom ended with a thud. The stock dropped as low as $49.60 just six months later during the financial crisis.

Before the BHP bid, the shares had regained enough ground to top $100 apiece.

Mr. Doyle argued that the market for fertilizer producers has improved enough since the bid in August that BHP’s offer is now below where Potash stock would have been trading without it. He pointed to rival fertilizer maker Mosaic Co., (MOS) which has risen almost 20 per cent since the BHP bid on optimism about demand. (There’s little or no takeover premium built into Mosaic, since it is controlled by Cargill Inc.)

Mr. Doyle said the company is still in discussions with other potential bidders, and that he believes another offer will come.

“We just are, because we are positioned for growth like no other company in the world.”

Mr. Doyle can say that again. Potash Corp is one of the hottest growth stories in the world, and bankers have been working feverishly on a potential break-up plan to fend off the $38.6bn bid from BHP Billiton. Looks like they've succeeded, but stay tuned, something tells me this story is far from over.