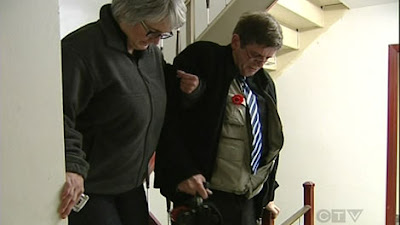 Disabled Nortel employees, just weeks away from losing their medical benefits on Dec. 31, watched what appears to be their remaining lifeline dissolve before their eyes Thursday.

Senator Art Eggleton's Bill S-216 that would amend the Bankruptcy and Insolvency Act and the Companies' Creditors Arrangement Act fell in a partisan vote 6-5 in a Standing Senate Committee hearing.

The end is coming for Jennifer Holley, who will see her income drop from $3,000 to around $900 a month. The drugs she needs cost $400 on their own leaving her $500 for everything else.

"We're all worried about what we're going to do after the new year."

Holley said the emotional toll on some of her colleagues has been devastating. Already in poor health, some will have to move from homes specifically adapted for their condition to government housing or worse.

Fortunately, she owns her home in the Ottawa Valley outright.

Federal Environment Minister John Baird said his government has tried to find a solution but making a law retroactive to include the Nortel workers would be impossible.

"We can't make laws retroactive because they would be struck down immediately by the court as unconstitutional, and I think some people are giving some false hope that Parliament could do that."

Baird said such a law would equate to expropriation of the bond holders' assets.

"It's almost akin to having $1,000 in the bank and your bank goes bankrupt. You'd have access to your money before the tellers (get their) pension."

The disabled workers are the only ones objecting to a $57-million sunset deal negotiated by a court-appointed monitor with the company.

Under that deal, Nortel agreed to fund long-term disability benefits along with health, life, dental and pension benefits until Dec. 31.

"The Conservative members put a one-page draft report on the agenda and were able to carry it by a 6 - 5 vote," Eggleton said. "It says that the bill should not be proceeded with."

However, Eggleton said he will continue the fight.

"I told them that 34 out of 54 countries and all our major trading partners have this kind of provision or something similar to protect the people on long-term disability."

Canada's Senate, the upper chamber of parliament, continues to postpone a vote on a proposed law that is intended to prevent long-term disabled workers from being treated as unsecured creditors in corporate liquidations.

Bill S-216, which moves disabled employees up the queue to creditor status, is meant to help 375 Nortel Networks Corp. employees, who suffer from long-term disabilities such as multiple sclerosis and Parkinson's disease, who will lose their benefits at year's end because of a court-approved former employees' settlement this year.

The proposed legislation has stalled at committee level because of concerns expressed by Conservative-appointed senators under direction from the Canadian government. Industry Minister Tony Clement said last week that Bill S-216 would cause litigation because of the court-approved Nortel settlement agreement.

"They have no data to support it. If you look at what they've presented, it just doesn't stand up to scrutiny," Greg McAvoy, a Nortel employee on long-term disability, said. "The Conservatives have been instructed to vote it down. It's bad news for us."

"Who would believe that this would happen in Canada?," he said.

Toronto-based Nortel was North America's largest maker of telecommunications equipment. Since it filed for bankruptcy protection in Canada and the U.S. in 2009, Nortel has been auctioning off its assets.

The bill aims to protect Canada's workers from losing their disability benefits by increasing their priority on claims to an insolvent employer's assets.

"I believe what Nortel did was not right," Conservative-appointed Sen. Vim Kochhar said in the Senate Thursday. "I am prepared to support the bill if for one minute I could be convinced that this bill will result in the desired results."

Friday marks the International Day of Persons with Disabilities, a day Kochhar said in the Senate should be celebrated.

Without the bill's passage, which would need to go through the House of Commons, the Nortel disabled say they will be pushed into poverty.

"Surely our society has not become so revolting that our most vulnerable citizens are sued and kicked to the curb and forgotten," said Peter Hoyle, a reverend at Halton Presbytery of the United Church of Canada, in an open letter to Prime Minister Stephen Harper, Industry Minister Tony Clement and Senate Leader Marjorie LeBreton.

A group of the disabled Nortel workers filed an appeal to an earlier court ruling.

I recently referred to the plight of Nortel's disabled. Diane Urquhart and others have been instrumental fighting for their rights (read her comments on Bill S-216). I understand why creditors are squeamish about this case, but I also think they're making way too much fuss over this bill. Employees who suffer from long-term disabilities deserve to have some financial peace of mind as they cope with their illness. There is a moral dimension to this case and I agree with the comments made by Peter Hoyle of the United Church of Canada. It's unacceptable and reprehensible that our laws can't defend the rights of our most vulnerable citizens. Public pensions should also voice their concern over this case and do the right thing by supporting Bill S-216.