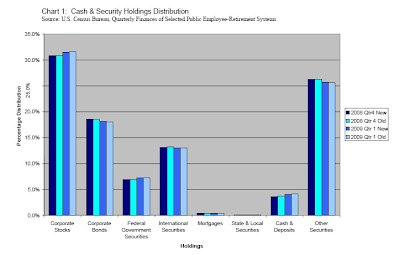 The value of assets held by the 100 largest U.S. public pension funds rose 6.2 percent in the third quarter from the prior quarter, reaching their highest level in two years, a report by the U.S. Census Bureau said on Wednesday.

The value of the assets held by the state and local pension funds also rose 5.2 percent from the same period a year earlier, marking their fourth consecutive year-over- year quarterly increase, the report said.

The report said the value of the investments, whose returns help pay for the pension benefits of millions of retired public-sector workers, was more than $2.5 trillion last quarter.

Public-sector retirement systems across the nation have been clawing their way out of deep financial holes created by the recession and turbulent financial markets, and at the same time have been facing increased scrutiny about their current and future costs.

The California Public Employees' Retirement System, the biggest U.S. public pension fund, for instance, saw the value of its assets fall to as low as $160 billion during the financial meltdown from a peak of $260 billion. The pension fund's assets currently stand at about $221 billion.

The recent losses by public pension funds and the size of their projected liabilities are fueling debates in statehouses and local government chambers across the nation over requiring public employees to contribute more to their pensions and reducing benefits for future public-sector workers.

Some officials are also calling for doing away with traditional defined-benefit pensions altogether for government workers and offering government employees retirement accounts similar to 401(k)s common in the private sector.

San Diego Mayor Jerry Sanders, for instance, is planning to ask voters in California's second largest city to approve a measure for a such shift to lower its costs.

"It's pretty unrealistic to think that we're going to have defined-benefit plans, at least on a local level," Sanders told Reuters in a recent interview.

You can download the report by the US Census Bureau by clicking here. The results are not surprising given that the S&P 500 gained 11.3% in Q3 2010. In other words, public pensions rode the beta wave higher in Q3 but still underperformed the broad market index (understandably so since they're not just invested in stocks).

What remains to be seen whether public pension funds can continue riding the beta wave higher in 2011. As a friend of mine told me today, "when everyone is bullish on stocks, they're usually wrong". My thinking is that this year will be all about alpha, with some beta juice in a few sectors. I'm recovering from Lasik eye surgery but will try to post my outlook 2011 this week.