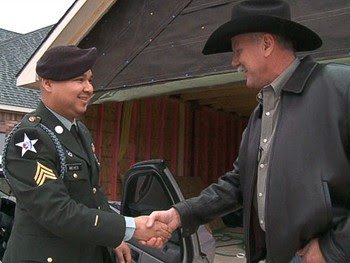 Christmas is a time for family and friends. It's also a time to reflect on how fortunate and blessed we are and to give to those who are less fortunate.

Last year, I wrote about Katie Piper's Christmas message. This year, I was touched by the kindness of a man called Dan Wallrath, one of the CNN heroes who builds free homes for wounded vets:

Alexander Reyes' boyhood dream of a military career ended when he was hit by an improvised explosive device during a patrol two years ago in Baghdad.

"Laying in that hospital bed ... sometimes I felt I'd rather [have] died," Reyes said. "My life came to a complete halt."

Reyes sustained severe blast injuries that led to his medical discharge; he's on 100 percent medical disability. Like many soldiers wounded in Iraq and Afghanistan, Reyes, now 24, found the transition to civilian life difficult.

But he and a handful of other injured veterans are getting help from what may seem an unlikely source: a custom home builder in Houston, Texas.

Dan Wallrath recently presented Reyes and his wife with an unexpected gift: a home built especially for them, mortgage-free.

"Thank you. That's all I can say," Elizabeth Reyes said, sobbing and clutching her stunned husband's arm as Wallrath surprised them with the house.

For Wallrath, giving wounded veterans a place to call home is his way of saying thanks. Since 2005, his organization has built four houses. Five more are under construction, and he's expanding his idea into a national campaign called Operation Finally Home.

Wallrath spent 30 years making upscale clients' dream houses a reality. But he found a new mission in 2005 when he met with Steve Schulz about a very different type of project.

Schulz's 20-year old son, a U.S. Marine, had been gravely injured in Iraq. Schulz desperately needed to remodel his house to accommodate his son's wheelchair. 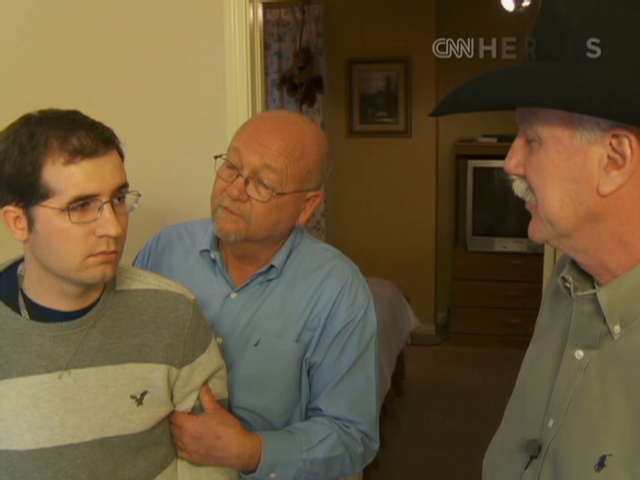 "I had no idea how I was going to pay for it," Schulz said. "I just knew that I had to get it done."

Wallrath went to advise Schulz on remodeling his house as a favor to a friend. It was a meeting that changed Wallrath's life.

He remembers Schulz showing him photos of his son Steven.

"He was a big, strapping Marine," Wallrath said. But the pictures he saw of Steven taken after his injury told a different story.

Wallrath mobilized an army of carpenters, plumbers and suppliers who took on the remodeling job for free. They widened doorways, built a ramp to the back door and made the bathroom handicapped-accessible.

"Anything that needed to be done, Dan said, 'We'll take care of it,' " Schulz recalled. "It was just a huge, huge relief."

When the work on Schulz's home was complete, Wallrath realized he was just getting started.

"It really broke my heart to think [about] these young men and women," he said. He decided the best way he could help wounded veterans was by doing what he knew best: building them homes.

"It was like someone hit me upside the head with a 2x4. ... I just felt like this is what God wants me to do."

He took his idea to his local trade group, the Bay Area Builders Association, and convinced members to start a home-building program for wounded veterans.

With donations from suppliers and contractors, Wallrath said, the group can build a $300,000 house for $25,000 to $50,000. Each house is fully furnished and customized to meet the needs of each family and is mortgage-free. The group also covers the taxes and insurance for two years.

Wounded veterans or their spouses often have to find a new career or go back to school, making it hard to make ends meet, Wallrath said.

"If you can alleviate a financial burden off these young kids where they can concentrate on rebuilding their lives, you can really make a difference," he said.

Lt. Erasmo Valles is one such story. As a Marine, he was injured by an IED in Iraq in 2004 and ultimately had one of his legs amputated. Returning to civilian life was hard, and his family rapidly burned through its savings.

"We'd saved money for rainy days, but ... it was raining," Valles said.

Receiving a home from Wallrath in November 2008 turned their fortunes around. Valles, 34, is now studying for his doctorate in public safety; his wife earned her master's degree and is now a special education teacher.

Wallrath is determined to help as many families as he can. He's trying to enlist builders' associations across the country to join his crusade, with the goal of building 100 homes. His program got tremendous interest at an industry event in January, and it soon hopes to break ground on a house near Chicago, the first outside of Texas.

Considering the industry was hard-hit by the recession, Wallrath says he's been heartened by the response.

Now retired, Wallrath dedicates about half of his time to this effort without pay. He says it's the least he can do to repay some of the more than 30,000 troops who've been wounded in Afghanistan and Iraq.

"These kids ... they're doing it for me and you," he said. "So we're the ones that need to step up and do something."

Here is to Dan Wallrath and others who "step up and do something" for those in need. You don't need to be Bill and Melinda Gates to give back to your community. All it takes is a good heart, dedication to a cause you believe in and lots of selfless perseverance. I wish you all a Merry Christmas and Happy Holidays full of love, health and happiness.