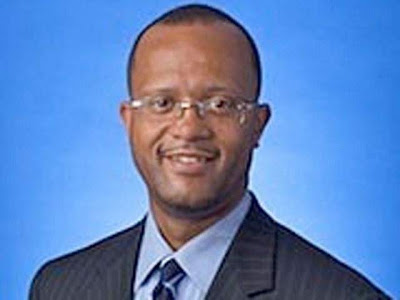 Robert Snell and Christine MacDonell of the Detroit News report, 'It just blows my mind,' a pension board trustee says of kickback probe charges:

Many of those deals fizzled, costing the pension funds more than $84 million, money that could have been used to pay for benefits of thousands of retired Detroit municipal employees.

Beasley, a fraternity brother of ex-mayor Kwame Kilpatrick at Florida A&M University, is portrayed as the gatekeeper to hundreds of millions of dollars controlled by the city's pension funds. Prosecutors allege he wielded power over people and businesses seeking investments from the Police and Fire and the General Retirement pension funds because he sat on both boards and was a fundraiser for the mayor's personal charity, the Kilpatrick Civic Fund.

"I had no idea the kind of money and the kind of things they said he was getting," said George Orzech, a trustee on the city's police and fire pension board. "It just blows my mind. It's sad. That was a dark time in the pension board history."

In several cases, Beasley supported multimillion-dollar loans to businesses that allegedly contributed cash to the mayor's charity, according to an indictment unsealed Tuesday. Beasley also allegedly asked business people to provide private flights for Kilpatrick, his wife Carlita, his father and others to Bermuda, Las Vegas and Florida.

Those who contributed to the Civic Fund reportedly received tens of millions of dollars from the pension funds. One who didn't pay was fired and lost a lucrative contract, according to the indictment.

The 43-year-old Chicago resident is the first person charged in a long-running FBI probe of investments made by the pension funds and pay-to-play allegations.

"This is another example of a once trusted public official abusing their power for personal gain," said Andrew Arena, the FBI special agent in charge of the Detroit office. If convicted, Beasley faces up to 20 years in prison. Charges in the six-count indictment include extortion, attempted extortion and conspiracy.

"I think it's interesting that only one person from 10- and 11-member boards, respectively, got indicted," Piszczatowski said. "I haven't seen their witness list, but you can bet everybody who's testifying is looking for some type of deal."

The police and fire pension fund has fully cooperated with the federal investigation, said Sean Neary, the fund's chairman.

"We look forward to the speedy implementation of justice in these matters so we can move forward in conducting the people's business for all active and retired police and firefighters in this great city," Neary said in a prepared statement.

'Send me a love offering'

The indictment paints a picture of a brazen shakedown of people and companies seeking pension fund loans. Prosecutors allege the extortion happened at the height of the Kilpatrick administration in 2006 and continued into its dying days in September 2008, when Kilpatrick resigned under pressure amid the text-message scandal.

Beasley sat on two city pension funds as treasurer from 2006 until resigning in September 2008.

In August 2007, Beasley allegedly asked a businessman who worked for the police and fire pension fund's real estate consultant for a $15,000 donation to the Kilpatrick Civic Fund charity.

"Send me a love offering," Beasley said in a phone conversation, according to the indictment.

The consultant said no.

Two months later, in October 2007, Beasley and the pension board voted to fire the consultant after 17 years of service, according to the indictment.

In early 2007, Beasley voted in favor of investments totaling $20 million for a private equity firm. That summer, Beasley, his wife and children went on vacation in the Turks and Caicos Islands. The owner of the company reportedly paid for the trip and gave Beasley money for gambling and expenses, according to the indictment.

Separately, Beasley is said to have asked a head of the police and fire pension fund's investment management company to hire his "paramour." The businessman complied, according to the indictment.

The Atheneum Hotel is co-owned by Greektown businessman Jim Papas, who has had pension fund dealings.

The lawyer helped organize birthday parties at the Atheneum for Beasley in January 2007 and for two police and fire pension board trustees in August 2007, according to the indictment. Many of the guests were people with financial ties to the pension funds.

"In order to attend the party, these people were asked to donate large sums of cash for a birthday present," the indictment alleges. In all, Beasley received $10,000 at the birthday party.

Based on meeting minutes, one trustee was Paul Stewart, the former vice president of the Detroit Police Officers Association.

Months after the party, Stewart and Beasley voted to increase Zajac's annual salary by more than 33 percent.

The pay hike request was surprising at the time, said Orzech, the police and fire fund trustee.

"That came out of the blue," said Orzech, who voted against the hike.

Zajac receives at least $18,445 a month from the police and fire pension fund, according to the fund's meeting minutes.

"Send me a love offering," got to love that one. This is just another case of many which will surface over the next few years. As the FBI gears up for Operation "Perfect Hedge," they should read one of my classics, The Mother of All Stealth Scams, and start Operation "Pension Pilfer".

Below, the FBI says its probes of corporate criminals led to 241 convictions and $2.4 billion in restitution for financial victims last year as agents went after insider trading and other investment crime that defrauded thousands. If they think that's a lot of moolah, wait till they start probing pensions.