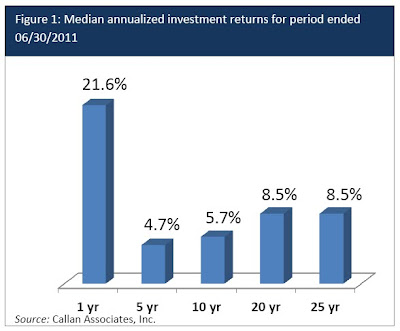 The National Association of State Retirement Administrators (NASRA), a non-profit association whose members oversee retirement systems that hold more than two-thirds of the more than $2 trillion in state and local government assets, issued a brief on public pension plan investment returns (h/t, Don):

For fiscal year ending June 30, 2011, state and local government retirement systems had a median investment return of 21.6 percent. With a slow economic recovery and ongoing global market volatility, it is important to keep in mind that a long-term focus is an overarching factor in public pension investment strategies and projections. This issue brief discusses how investment return assumptions are established and evaluated and compares these assumptions with public funds’ actual investment experience.

Policy discussions continue surrounding public pension fund investment return assumptions and whether they are unrealistically high given the reality of the post-Great Recession market. However, an investment return assumption that is set too low would result in overstating liabilities, which would overcharge current taxpayers, undercharge future taxpayers, and result in a poor allocation of resources.

Public retirement systems employ a process for setting and reviewing their actuarial assumptions, including the expected rate of investment return. Most systems review these assumptions regularly, pursuant to statute or system policy. The process for establishing and reviewing the investment return assumption involves consideration of various factors, including financial, economic, and market data. This process is also based on a very long-term view, typically 30 to 50 years.

Although public pension funds, along with most other investors, have experienced sub-par returns over the past decade, median public pension fund returns over longer periods exceed the assumed rates used by most plans. As shown in Figure 1 (above), median annualized investment returns for the 20- and 25-year periods ended June 30, 2011, exceed the most-used investment return assumption of 8.0 percent. For example, for the 25-year period ended June 30, 2011, the median annualized return was 8.5 percent.

I will leave you read the entire document, but it concludes:

Empirical results show that since 1985, a period that has included three economic recessions and four years when median public pension fund investment returns were negative (including the 2008 decline), public pension funds have exceeded their assumed rates of investment return. As the standard disclaimer says, past performance is not an indicator of future results; however, considering that public funds operate over very long timeframes, actuarial assumptions should focus on long timeframes. Viewed in this context, compared to actual results, public pension plan investment return assumptions have proven to be conservative.

Love the reference to the 'standard disclaimer', which they ignore to investigate further. But what if 8% is really o% in the next 25 years? Let me guess, hedge funds, private equity and real estate will help NASRA's members attain their rosy investment assumptions? Ask South Carolina how that is working out for them. Sounds like NASRA is high on hopium (watch below, lol). 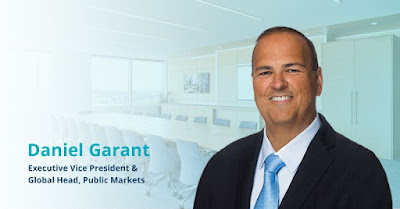 Sarah Rundell of Top1000Funds spoke to Daniel Garant, EVP & Global Head of Public Markets at BCI, about doubling the allocation to private debt, the shifts in the portfolio and the focus on active management: BCI began building the allocation to private credit after the GFC when new regulatory burdens on banks requiring they hold more capital opened a gap for investors to lend more to private companies. Today, one reason opportunities in the asset class have spiked is because of its competitive advantage over the syndicated loan market, explains Daniel Garant, executive vice president and global head of public markets at BCI where he oversees a $137.8 billion allocation to fixed income and public equity, the bulk of which (79.5 per cent) is managed internally. “Private debt competes with syndicated loans in the upper-mid market, but syndicated loans are more subject to market volatility. For instance, private debt transactions saw a higher certainty of execution than sy
Read more