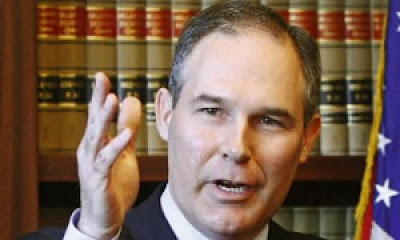 The investigation does not involve any Oklahoma bank, a spokeswoman for the attorney general's office said.

Pruitt said he has no evidence of wrongdoing.

“Our investigators in the AG's office will collect that data and we'll make an assessment at that point about the next step, if any,” he said. “If there is any occurrence of fraud, I will take the necessary enforcement steps to recover potential losses of tens of millions of dollars.

“This is something that my colleagues in other states, as well as information we've received heretofore, indicate it's something we need to pay attention to,” Pruitt said.

The investigation, which could result in criminal charges and civil litigation, is similar to actions taken in California, Virginia and Florida to recover more than $200 million in state pension funds, Pruitt said. Telephone calls to his office prompted the investigation, he said.

“We've been doing quite a bit of homework leading up to today to determine whether it is meritorious for us to initiate an investigation,” Pruitt said.

The investigation will include confirming that banks are following federal guidelines for currency trades for the state's pension funds and are not improperly manipulating foreign currency trade prices to maximize their own profits, Pruitt said.

Claims have been made against some banks, questioning the discrepancy between the time of day the currency transactions are made and the trade price that is charged to the fund.

That could result in a bank's choosing a less favorable exchange rate instead of giving a pension fund the price based on the actual time of the trade, and then keeping the difference, he said.

Oklahoma's seven pension systems have investment assets of $21.4 billion, said Rep. Randy McDaniel, who is chairman of the House of Representatives Oversight Committee on Pensions. It's expected about 15 percent, or $3 billion, is invested overseas; 20 percent of a portfolio being invested internationally is considered typical.

“I do have reason to believe that there are some recoveries that could be made, and if they are seven figures or larger that could be a great addition to the financial status of the plans,” said McDaniel, R-Oklahoma City. “I am very encouraged by the efforts of the attorney general.”

James Wilbanks, executive director of the Oklahoma Teachers Retirement System, said he was not told in advance of Pruitt's decision to start an investigation. The teachers retirement fund, the state's largest pension fund, represents nearly half the invested pension funds, or about $10.1 billion; the retirement plan has about 153,000 members, including 90,000 active teachers and about 50,000 retirees and beneficiaries.

“I wouldn't say we have concerns,” he said. “We do have a relationship with a custodial bank. To our knowledge, they are behaving in good faith and executing our contract exactly the way they should and not taking advantage of any situation where they could have made some additional money at our expense.”

“You're never 100 percent sure that somebody who is handling your money for you is not doing something that they shouldn't be,” he said.

Duty to the public

State Treasurer Ken Miller, chairman of the Oklahoma State Pension Commission which oversees each of the pension systems, said public officials have a duty “to scrutinize investments made on behalf of Oklahoma's public pension systems to ensure they are invested ethically and legally.”

“If malfeasance is discovered, damages should be recovered, offenders should be held accountable and pensioners should receive due compensation,” he said.

“Investment performance has a significant financial impact on the fiscal health of pension systems,” said McDaniel, a financial adviser.

“The plans are very well-managed, very well-diversified,” he said. “They're doing a good job. Nonetheless, we're still going to look at them and make sure everything is done right.”

I agree with State Treasurer Ken Miller, public officials have a duty to scrutinize investments to ensure they are invested "ethically and legally." A similar investigation with State Street defrauding California's pensions is still ongoing but State Street was re-hired by CalPERS after being likened to 'thugs' (go figure!).

I wouldn't be shocked to discover that the custodian banks raped Oklahoma on F/X transactions. Why do I say this? Because I know senior F/X traders/salespeople who tell me it's too easy to screw clients over, and many corporate and institutional clients are getting raped on F/X transactions because this activity remains unregulated by regulatory authorities. That's why F/X has consistently been one of the most profitable activities at banks. Basically, it's the Wild West, and clients are at the mercy of unscrupulous banks.

Ask Ray Dalio at Bridgewater if he trusts the banks when it comes to F/X transactions. Bridgewater and other elite global macro hedge funds have operational procedures in place to ensure that nobody is screwing them over. Admittedly, they trade huge volume, so banks give them preferred client status, but this should be the case with everyone, not just elite funds.

Let me end my comment by emphasizing that there is a duty to to scrutinize investments to ensure they are invested ethically and legally. That's why I blasted the Auditor General of Canada and that sham Special Examination of PSPIB earlier this week. There was no mention of Diane Urquhart's excellent analysis of PSP's 2008 annual results on my blog which exposed significant risk management gaps that led to huge losses during that fiscal year.

The entire Special Examination is a rubber stamp approval of PSP's entire operations without critically examining serious governance gaps in that organization. Canadian taxpayers deserve better than a political sham job and our Auditor General should publicly apologize for producing such a superficial report that basically proves my point, namely, when it comes to pension governance, our regulatory authorities and government bureaucrats don't have a clue of what they're talking about or worse still, they're covering up malfeasance, gross incompetence and possible fraud for political reasons. They should be ashamed of themselves and can learn a lot from their counterparts down south.