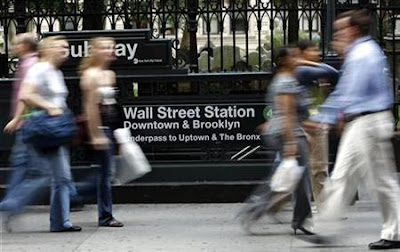 The state pension fund, one of the nation's biggest, is also exceptional because it is around 100 percent fully funded. In contrast, many states, counties, cities and towns around the country confront enormous shortfalls in their pension funds.

However, the New York state fund has yet to fully recover losses suffered in the 2008-2009 recession, Comptroller Thomas DiNapoli said.

Public pension managers are under the gun to improve returns because so many layers of local governments promised their workers pensions that they now find hard to afford.

The difficulty of affording public pension benefits has helped spark clashes between unions and politicians, as seen in Wisconsin, which limited unions' rights to bargain contracts.

As with any investments, returns vary with the periods measured. For example, the $233.6 billion California Public Employees' Retirement System, the biggest U.S. public pension fund, had a net return of 12.9 percent for the 12 months to March 31. California starts its fiscal year on July 1, and for its fiscal year-to-date, the fund returned a much fatter 18.6 percent.

In contrast to the New York City's $119 billion pension funds, which a deputy mayor criticized on Thursday for overly focusing on domestic equities, the state's pension fund also relies on international equities.

New York City's pensions are run by boards whose members are appointed by the mayor, the comptroller and the unions.

DiNapoli, an exceptionally powerful investor because he is the state fund's only trustee, said domestic equities rose 17.6 percent while international equities produced 14.3 percent.

Pretty impressive returns, but the 27% real estate return tells me something was definitely marked up or there was major risk taken in opportunistic real estate deals. Still, New York's state fund seems to fairing way better than other states which are dangerously underfunded, which tells me they're doing something right in New York.

At the city level, however, Joan Gralla of Reuters reports that NYC urged to alter investing mix to cut pension gap:

New York City is overweighted in U.S. stocks and should invest more of its pension funds in other assets, such as U.S. Treasuries, and must lower benefits for new hires, Deputy Mayor Robert Steel said on Thursday.

Putting more cash into international equities and fixed income, inflation-protected bonds, commodities, currencies, and real estate could improve returns, he said, helping the city afford over $80 billion of contributions over the next decade.

Steel said it could take two to three decades to return pension contributions to affordable levels.

Steel, a former Treasury undersecretary and Goldman Sachs executive, bashed City Comptroller John Liu's oversight of the city's pension funds, which he said returned more than 21 percent in the city's last fiscal year when the S&P 500 stock index's total return was 31 percent in that period.

City unions, Mayor Michael Bloomberg and Liu all appoint members of the city's five pension fund boards. They would have to approve Steel's proposals.

But the mayor has a rocky relationship with the unions, having threatened them with layoffs. He also has clashed with the Democratic comptroller and has even hired his own investment managers, breaking with tradition.

The mayor wants to compress public worker benefits to private-sector equivalents. He has focused on limiting pension benefits for new hires because the current benefits are legally protected.

Politicians around the country are grappling with the same problem -- how to close huge shortfalls in their pension funds while still funding schools, public safety and other services.

New York City is a financial trendsetter and other public pensions may follow its lead, as they have in the municipal bond market. At a total of $119 billion, the city's five pension funds are the sixth-biggest U.S. public pension fund.

Steel would keep the separate funds for the police, firefighters and civilian workers. The smallest pension fund, which covers school workers who are not teachers, would be merged with the teachers' fund.

The four remaining boards would set investment strategies but lose power, including the prized ability to pick investment managers. That job would go to professionals working for Liu and the mayor -- whose pay should be boosted, Steel said.

I know Robert Steel is an former Goldman executive, which means many will disregard his views out of sheer hatred for that firm, but I like his recommendations. He knows what he's talking about and he's right to bash City Comptroller John Liu's oversight of the city's pension funds. The performance in the last fiscal year is appalling.

NYC is going to experience tough times ahead. According to the Globe and Mail, JPMorgan Chase's results explain the glum mood among traders on Wall Street. Year over year, the bank's trading results look not bad. But looking at them relative to the first quarter, there's a big slowdown in activity, and a big slide in pay.This doesn't bode well for state revenues.

But there is also a governance gap in the city's pension funds which Mr. Steel rightly points out. It's obvious the board is doing a lousy job picking investment managers. I also have a huge bone to pick with US governance where boards overly rely on pension fund consultants who steer them into the wrong managers. The tyranny of pension consultants is a major governance flaw of US pension funds, all about cover-your-ass politics, and it is killing pension funds around the country. This is a major scandal that no reporter has covered adequately.

Finally, you might argue that US equities will outperform international equities in the coming few years or that they will all underperform bonds as global stock markets experience volatility in an era of deleveraging and deflation. If that turns out to be the case, good old bonds will continue to outperform stocks over the next decade. On an absolute return basis, however, I think there are plenty of opportunities, including seeding experienced hedge fund managers using managed account platforms. If Mr. Steel wants to invest in excellent managers, I have more than a few of them right here in Montreal to introduce him to.