Before I get into the latest topic, one small reminder on Haiti. It has been two weeks since that devastating earthquake and relief is only now starting to be more readily available.

But for some victims, relief will be much harder to get. I listened to Heather Mills of Physicians for Peace speaking to CNN's Larry King about the disabled in Haiti. I also read an article in the Globe and Mail, Program for the disabled lost in Haiti's rubble. It says that despite the odds, Canadian Marika MacRae, head of the charity Pazapa, insists the organization will carry on. Pazapa is a charity that has served disabled Haitian children since 1987 was wiped out in the earthquake.

Being disabled is hard enough in the developed world, I can't imagine how horrible it must be in a Third World country like Haiti that has just been devastated by a massive earthquake. Thank God organizations like these exist.

Anyways, back to pensions and financial markets. The big news on Tuesday was that the International Monetary Fund (IMF) revised up its global growth forecast to near 4% in 2010:

The global economy, battered by two years of crisis, is recovering faster than previously anticipated, with world growth bouncing back from negative territory in 2009 to a forecast 3.9 percent this year and 4.3 percent in 2011, the International Monetary Fund said in its latest forecast.

But the recovery is proceeding at different speeds around the world, with emerging markets, led by Asia relatively vigorous, but advanced economies remaining sluggish and still dependent on government stimulus measures, the IMF said in an update to its World Economic Outlook, published on January 26.

“For the moment, the recovery is very much based on policy decisions and policy actions. The question is when does private demand come and take over. Right now it’s ok, but a year down the line, it will be a big question,” said IMF Chief Economist Olivier Blanchard in an IMF video interview.

IMF Managing Director Dominique Strauss-Kahn has warned that countries risk a return to recession if anti-crisis measures are withdrawn too soon.

The IMF said it had revised upwards its earlier forecast for global growth by ¾ percentage point from the October 2009 forecast.

Along with the update to its forecast, the IMF also released a new assessment of global financial conditions in its Global Financial Stability Report (GFSR). It said that financial markets have rebounded since the lows of last March, the result of improving economic conditions and wide-ranging policy actions by governments.

“Notwithstanding the recent sell-off, risk appetite has returned, equity markets have improved, and capital markets have reopened,” Jose Viñals, Director of the IMF’s Monetary and Capital Markets Department, said.

But policymakers still face extraordinary challenges as they seek to unwind the unprecedented fiscal, monetary, and financial support they provided to keep their economies and financial markets from collapsing, the GFSR update pointed out.

The WEO forecast said that in advanced economies, the beginning of a rebuilding of corporate inventories and the unexpected strength of U.S. consumption had contributed to a rebound in confidence, and inflation was expected to remain contained. But high unemployment rates, rising public debt, and, in some countries, weak household balance sheets present further challenges to the recovery.

The IMF report said that the varying pace of recovery across countries called for a differentiated response in the unwinding of measures used to stimulated the economy and combat the crisis.

Due to the still-fragile nature of the recovery, fiscal policies need to remain supportive of economic activity in the near term, and the fiscal stimulus planned for 2010 should be implemented fully. However, given growing concerns about fiscal sustainability, countries should also make progress in devising and communicating exit strategies.

Crucially, there remains a pressing need to continue repairing the financial sector in advanced and hardest-hit emerging economies. In these cases, policies are still needed to tackle bank’s impaired assets and restructuring. Unwinding the financial sector support measures gradual; it can be facilitated by incentives that make measures less attractive as conditions improve.

Policymakers will also need to move boldly to reform the financial sector with the objectives of reducing the risks of future instability and rethinking how the potential fallout of financial crises would be borne in the future, while at the same time making the sector more effective and resilient.

At the same time, some emerging market countries will have to design policies to manage a surge of capital inflows. Macro-prudential policies can be used to address the potential for bubbles at an early stage by limiting a buildup in risks. 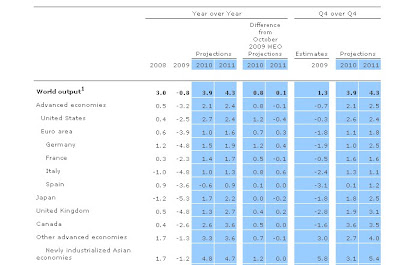 As you can see, the most significant revisions from October were in newly industrialized Asian countries, led by China, but significant upward revisions also came from the US and Canada.

What did the stock market do? It rallied following a better than expected consumer confidence report but then fizzled this afternoon. The five day chart of the Dow Jones says it all: 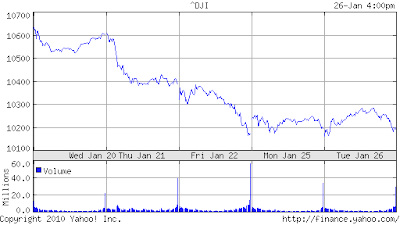 But as growth comes in stronger than expected, it will be interesting to see if markets will respond in kind. If not, this could signal that growth will peter out in the second half of the year.

One report that has been making its way around the investment community recently comes from McKinsey Global Institute (MGI), Debt and deleveraging: The global credit bubble and its economic consequences. It's a fascinating (and scary) read of a long-term structural debt problem that could take years to work through. It's scary because the report neglected to focus on the global pension crisis, which will add to the deleveraging process.

All this is in the future. But for now, get ready for more upward revisions and pay close attention to any speculative activity bubbling up in the stock, bond, and commodity markets. Oh, and before I forget, don't you worry, Bubble Ben will get reappointed on Thursday. He's a shoo-in.