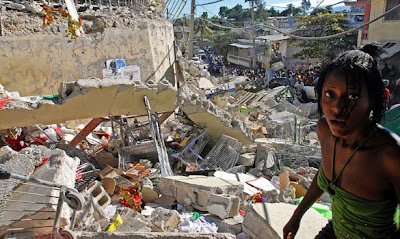 Tens of thousands of people were feared dead and many more left homeless after a massive earthquake shook the Haitian capital, Port-au-Prince.

Children were in class when the quake struck as darkness fell on Tuesday, flattening schools, hospitals, apartment blocks and slum dwellings. A resident said that 80 per cent of the city was destroyed.

More than 24 hours later, relief workers were still struggling to get into the impoverished country to help.

President Préval, whose presidential palace was wrecked, described stepping over dead bodies in the parliament building and hearing the cries of those still trapped.

He estimated that between 30,000 and 50,000 had perished, although the Prime Minister, Jean-Max Bellerive, spoke of 100,000 fatalities. He said: “In some neighbourhoods we don’t even see people so I don’t know where those people are.”

Hillary Clinton, the US Secretary of State, compared the tragedy to the Asian tsunami which killed more than 220,000 people five years ago. Mrs Clinton cut short her trip to the Pacific in light of the tragedy.

Up to 200 UN employees were feared dead after its five-storey headquarters collapsed. Mr Préval said that Hedi Annabi, the UN's Special Representative, and the Archbishop of Port-au-Prince were among the dead.

The presidential palace, the cathedral, government ministries, apartment blocks, embassies, schools and hospitals were destroyed. Tens of thousands of homes were wrecked, many in the capital’s huge slums. There was little electricity or running water. Roads were rendered impassable by fallen trees and debris.

Scores of tourists may have been killed at a luxury hotel, but the Foreign and Commonwealth Office had no reports of British casualties.

The 7.0 magnitude earthquake is the latest catastrophe in two centuries of brutal dictatorships, natural disasters and ruthless exploitation that have reduced Haiti to abject misery.

The epicentre was just ten miles west of Port-au-Prince and the Red Cross said that its three million inhabitants would need food, water and shelter for months to come. The US military is planning to send an aircraft carrier, helicopters, transport aircraft and at least 2,000 Marines in response to what President Obama called a “cruel and incomprehensible tragedy”.

Rescue specialists were delayed by snow at Gatwick even as Port-au-Prince airport reopened.

Like you, I watch in horror those haunting images of death, destruction and devastation coming out of Haiti. This is a calamity and right now, aid agencies need money to help as many people as possible. The NYT news blog, The Lede, and Wyclef Jean's blog are tracking rescue efforts in Haiti. Mr. Jean wrote this on his blog:

"I cannot stress enough what a human disaster this is, and idle hands will only make this tragedy worse. The over 2 million people in Port-au-Prince tonight face catastrophe alone. We must act now."

Please go to this CNN link to see how you can help (warning: video below contains graphic images).