Pensions Look to Leverage Up? 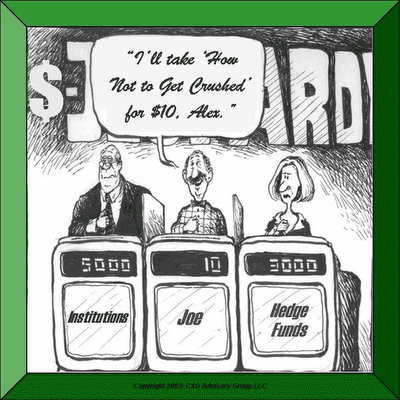 Craig Karmin of the WSJ reports Pensions Look to Leverage Up:

Public pension funds needing to boost their returns but frustrated with hedge funds and private-equity investments are turning to one of the oldest investment strategies—using borrowed money to boost performance.

The State of Wisconsin Investment Board, which manages $78 billion, became among the first to adopt the strategy when it approved the plan Tuesday. The fund will borrow an amount equivalent to 4% of assets this year, and as much as 20% of its assets over the next three years.

Fund officials say that use of leverage could eventually go higher—in theory, at least, up to 100% of assets, according to the staff analysis. But Chief Investment Officer David Villa says that level wouldn't be palatable for the Wisconsin fund. He said the pension fund was advised by four money managers, including Connecticut hedge-fund firms AQR Capital and Bridgewater Associates.

Wilshire Consulting, which advises pension funds on investments, says leverage helps the funds meet their long-term return targets without relying too heavily on volatile stocks, or tying up their money for long stretches in private investments. Low interest rates make it impossible to meet those targets with simple bond investments. Wilshire managing director Steven Foresti says he has been in discussions with about a half-dozen funds that are interested in the leverage strategy.

While public pensions for years have had indirect exposure to borrowed money through property or buyout funds, most have steered clear of borrowing money in their own portfolios.

That public pension funds would contemplate the use of borrowed money so soon after a credit crisis stoked by financial leverage already is setting off alarms for some in the industry.

These analysts wonder if this is little more than the latest gimmick peddled by investment consultants. In previous years, consultants pitched a strategy called portable alpha, an aggressive bet involving leverage and hedge funds that magnified returns when the stock market was surging but aggravated losses when the market turned down.

"When people reach for return with nontraditional approaches they can take on risks they don't fully appreciate," says Daniel Jick, head of HighVista Strategies, a Boston-based firm that manages money for small schools and other investors. As many investors found out in 2008, he added, "using leverage can force you to sell assets you'd rather not sell."

Moreover, he questions the timing of leveraging bonds when many economists are forecasting a pickup in inflation and an increase in interest rates as the economy recovers. That would cause bond prices to fall, and leverage could magnify those declines.

Some advocates of the leveraged approach acknowledge these drawbacks, but say the strategy makes sense anyway. Most big public pensions have expected annual rates of return between 7.5% and 8%. Wisconsin, for example, assumes 7.8%.

Many analysts consider those return rates unrealistic. Yet pension funds are loath to change them because that would require local governments to get more money from taxpayers to compensate for lower projected returns. Even at an 8% return, the average public fund will have about 55% more in liabilities than in assets 15 years from now, due to recent losses and challenges in raising contribution rates, according to PricewaterhouseCoopers.

Most pensions piled into stocks in the late 1990s, counting on a booming market to increase assets, which in turn allowed these funds to increase retirement benefits or reduce state contributions. Since the tech-stock bust, however, many pensions became queasy with the volatility attached to stocks and have been trying to find a substitute to help meet their return targets.

During much of the previous decade, many pensions thought they found the answer in private equity, which put up big numbers. But these funds collapsed in value in 2008 alongside the stock market while locking up pension fund capital for 10 or more years.

"We started talking to the board about this two years ago," says Mr. Villa, Wisconsin's investment chief. "It would have been nice to have this in a place prior to the crisis." That is because the strategy calls for leveraging assets that held value in 2008, Treasurys and other highly rated bonds.

"Fixed income is a good hedge in a crisis scenario," says Rick Dahl, chief investment officer for the Missouri State Employees' Retirement System, who said he is considering using this strategy. "If I can ramp up my fixed income to the point where it gets equity-like returns that makes a lot of sense."

But he isn't yet convinced. "I'll need to think through all the ramifications, too," Mr. Dahl said.

Rick Dahl is one of the smartest pension fund managers I've ever spoken with. While adding leverage to fixed income may sound crazy at this point of the cycle, it might be a worth pursuing, especially if pension funds believe we are heading into a protracted deflationary episode.

The problem with this strategy is what happens when all the pension parrots start doing it? Who is overseeing systemic risk of public pension funds investing in hedge funds, private equity, and now leveraging their fixed income portfolios? I hope someone at the Fed is also "thinking through all ramifications" of this strategy because before you know it, leverage in bonds is about to grow exponentially, posing a new set of macro risks for the global financial system.

The idea of using leverage intelligently can be traced back to Bridgewater Associates:

The “All Weather" beta strategy suggests that you can maximize your portfolio’s Sharpe ratio (lower risk with higher returns) by leveraging asset classes including bonds. Any asset class that is expected to earn more then the risk free rate, and less then the equity premium. The idea being that by fixing your portfolio for a specific expected return (10% in their article) with leverage you are getting more diversification by having lower asset class correlation, which reduces your portfolio’s risk. In theory it makes sense, but in practice, complications can arise as correlations are notoriously unstable.